The Action and Content of The Epic ‘Eriin Sain Khan Kharangui’

He also rebelled against

With the father of one thousand and five hundred years old

Who lived in the open meadow

By the sheltered mountain

With the queen Düngee, the beautiful mother

At the start of good time and

At the end of bad time, 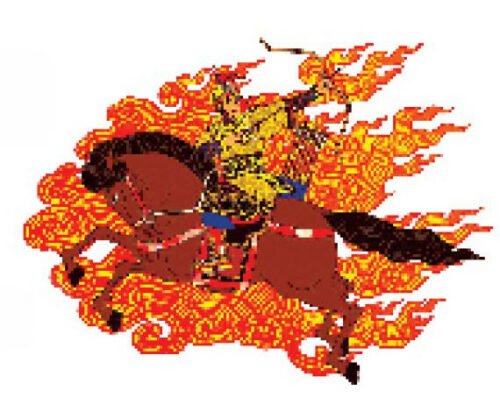 Is made from steel In the denouement of the epic ‘Khan Kharangui’ the hero With the fused ribs Khan Kharangui rode his brown horse and quested for a long And innominate bone. journey. Khan Kharangui dreamed on the long journey that

Born as seven years old Erkhem Khar, the son of heaven, wanted to make the beauti

By vibrating seven mountains ful Toli “the fair” as his wife. She dreamed that Khan Kharangui was the trustful companion of her life. She sent the

There is a description of the hero’s weapons, clothing, and old man with the message that expressed that the other hero horse:wanted to make her his wife.

The parents of Khan Kharangui knew that their son

With forty-four cinches, sought to marry the beautiful Toli and sent his brother UlaaWith bronzed-silver bridles, dai Mergen to assist him. Both brothers met on the way and With big saddle-like mountain saddles, went to the birthplace of the beautiful Toli. Then they went With elephant white bow to Agi Buural King. Khan Kharangui and Erkhem Khar, the Of great strength, son of the heaven, vied with each other for the beautiful Toli.

Thirty fathomed handled They contested by racing horses, wrestling, and shooting arRed spear with arrows rows. Then Khan Kharangui won these contests. He said to Nine fathomed steel sword Erkhem khar, the son of heaven: “these contests belong to

With glassy inlay me”. Khan Kharangui took the beautiful Toli …

They stayed in it. Another interpretation says: They sang like swans, They amalgamate like the coat colours of a wild horse.

With big black horse All of them lived happily ever after.” By this, the action That he rides during hunting of the epic ends.

And a Small Black Horse

That he rides close by, Mongolian epics Geser, Jangar, Eriin sain Khan Kharangui His war-horse and others can be considered equal to the ancient Grecian Is brown coloured and slender epics, like the Iliad, Odyssey; the Indian Mahabharata and With ninety fathomed Ramayana; the song of Normandy of France; and the words And nine spanned ears… of Igor of Russia. In some cases, our epics exceed them by In such manner the epic continues. expressions and vocabulary.