Herders have also long supplemented their foodstuffs with agriculture as well as hunting. According to archeological findings, historical documents, and notes of ancient foreign travelers, it is proven that in Mongolia farming dates back to the Stone and Bronze Ages. Our tribal states continued and developed these traditions.

The methods and techniques of cultivating the soil, producing crops are unique in the way of suitability with the nomadic lifestyle. For producing crops, the ground should not have been cultivated beforehand. The soil is fertilized by manure. The field is irrigated. The cultivable area is usually plowed by the oxen with a plow made from cedar. The seeds are scattered by hand. The harvest is then reaped with sickles. Grain is threshed by the trampling of horses and cattle. Then the grain is sifted through the sieve made of goat or sheep hide and is pounded into a fine powder using a hand or leg mortar.

Mongolians usually grow grain, barley, wheat and millet. The harvested grain is made into flour by grinding through a windmill or stone mill which is driven by horse or ox. In some folk tales it is said that it is “better to eat the cow than eat your seed,” meaning that if you run out of grain seed, it would be harder to survive than running out of animals. It is a fact that for some poorer folks, agricultural farming was a main necessity than animal husbandry for their life. 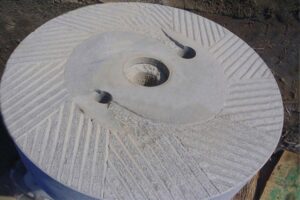 The farmer leads his oxen which draws a wooden plough; plough-silt is handled by the plough-jogger who says loudly hashuul (enclose), which is a spell meant to adjust labour arrangements. It also is a request to heaven and earth to provide humanity with rain and bumper crops.

Grow so as to reach the blue ox’s neck

Grow until everybody is amazed

Grow as high as the red ox’s back

Grow until everybody is puzzled

Grow until a rider dismounts and look at you in surprise

Grow in the way that bamboo grows

May they grow more than this year in the future

May they glorify their farmer’s name

This benediction symbolizes the wish for bumper crops and for great abundance. It employs an interesting simile when calling for it to grow to reach “the blue ox’s neck.” This reflects the herder’s way of measurement. The man leads the five yoked oxen to trample a layer of scattered grain in order to thresh them. These oxen are positioned in several rows. Each man can lead these oxen and boys drive them. At this moment to thresh grain we say:

Everybody is busy on the threshing-floor

Even though the morning star is in its zenith

This is called a song of trampling

At the end of the harvest, there is a ceremony which is arranged with the flour of barley, a plate of dairy products, and tankards of tea, milk-vodka and fermented mare’s milk. This is a labour feast celebrating the end of the harvest. The offerings are made to surrounding mountains and rivers. The children are gratified with sweets. Then somebody recites the benediction:

And graced by all

And anointed with the best of dairy products

This benediction speaks about bumper crops which are celebrated by all and the threshing-floor is anointed with grace. The agricultural implements are also appreciated:

The spade, which worked hard,

Is anointed with confections the size of a wheel;

The plough, which worked hard,

Is anointed with confection of the size of a cup

Another benediction symbolizes a future bumper-harvest:

Every year makes us happy

Every year give us bumper-harvest

Everybody wishes to harvest