The airag emits a delicious smell and its taste can make your mouth water.

Every Mongolian loves to drink airag. Both males and females, including children, can drink airag by the bowls, from morning to evening. A bowl for airag holds 1 to 1.5 liters of liquid. In order to make airag, we use the airag skin of the previous year. We hang the soaked airag skin from the base of the ger roof and pour milked milk of mare into the hung skin and ferment the milk with the dried yeast of the previous airag. Then we churn the milk in the skin many times. The churning accelerates the fermentation of milk. The liquid can be churned 2,000-4,000 times. If you churn many times, you can make a good blend of fermentation. Airag plays roles of quenching one’s thirst, satisfying one’s hunger, and treating one’s illnesses because of its calories and nourishment. It has essential bio active constituents of and improves their metabolism. The airag treatment was and is famous for curing chronic illnesses, heart and lung troubles, stomach illnesses, rheumatism, back trouble, scurvy and dropsy.

The milk libation ceremony is celebrated to greet the warmth of spring and to receive the newborn animals. But at the beginning of summer, the mare’s milking ceremony is performed as a sign of mare’s milk fermentation. Mongolians have the custom to tether their foals and colts on the Tiger Day, at the inception of summer, and release them from their tethers on the Dog Day of autumn. There is a custom to celebrate the occasion of fermenting mare’s milk with a feast, which is held within three days of the tethering. We rejoice with a feast when we release our foals and colts from their tethers in the autumn. Nearby catchers of horses gather together when the day of tethering arrives. The most venerated catcher of horses binds an honorable scarf to his lasso pole, catches the first-born foal, and then hitches it to the first leg of the tethering-line. 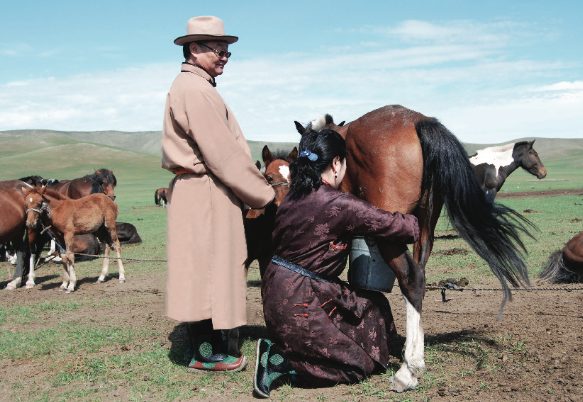 As soon as the tethering of foals and colts is over, the household invites those participants and hosts for a day of feasting mare’s milk fermentation.

After tethering, the household ferments their mare’s milk and preserves it. They also prepare dairy products for the feast of mare’s milk fermentation. Nearby acquaintances, friends, and relatives gather for the feast. Particularly, those 212 213 who first participated in tethering foals and colts will come to the feast. They bring milk-vodka, shredded cheese curds, rendered cream, cottage cheese, and other dairy products as a contribution.

Before the feast celebration, a long white felt rug is spread out at the head of tethering-line. On the felt there is a table on which cooked cakes of flour are tiered. There is also a plate full of boiled mutton and vessels with mare’s fermented milk for offering, milk, milk vodka, among other foods and drinks. At the head of the table, a big wooden pail full of milk is brought. The wooden ladle with its long handle bound with five-colored scarves is placed over the top of the pail. The head of this ladle has nine square holes. This pail of milk and the ladle, which will be used in this offering, are placed to the west of the other products. All of these items need to be placed before the gathering horses. 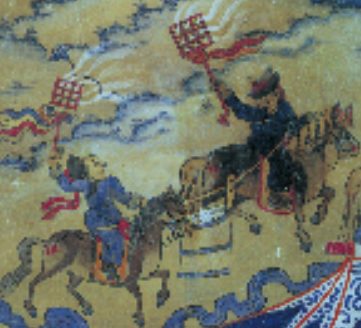 The horses are gathered and brought to the tethering line at sunrise. At first, the firstborn foal is caught and hitched to the tethering-line. When catchers finish tethering the foals they place their lasso poles in a row at the back of the ger. All gathered people can then enter the ger and have tea. Then they go out of the ger, whereupon the milking of mare begins. The first mare is milked by a man. This is a vestige of ancient tradition. In Mongolia men used to milk mares in ancient times. The Secret History of the Mongols says, “Temujin went on in pursuit of a palomino gelding with its companions and when he came to the Bogurchu’s household, Bogurchu was milking a mare.”

After milking the mares, a milk libation ceremony is performed. In order to do so, nine men who ride grey horses are picked from those participants. The head of the ger (or household) can lead them. If nine horses of whitish color are insufficient, seven or five horses can be used. The nine horsemen mount their horses and come to the door of the ger. The lady of the family then goes out of her ger and meets them holding a silver cup filled with milk. They should each taste the milk. 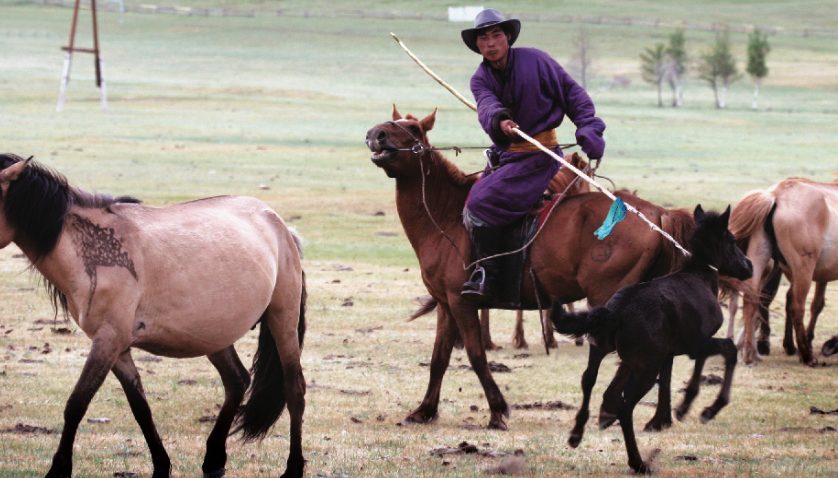 Those nine horsemen then go around the ger in a clockwise direction and come again to the felt spread out at the head of tethering-line. The head of the family slides the lasso pole through the two handles of the pail with milk and then two riders riding gentle horses carry the pail or pails. The head of the family can lead the horsemen. One rider from this group of horsemen takes milk from the pail with a ladle and makes a milk libation in all directions. In ordinary times, women make milk-libation using cow’s or ewe’s milk, but in special occasions like these, a man should make the milk libation. This is the basic difference.

The reason to chant the milk-libation is the

Fortunate birth of the Dappled mare;

Your milk has not yet been Tasted by all,

Only your dappled foal Has tasted it;

Even if you hold out your fingers

It can fill your palm with stretched fingers;

If we put a vessel under a mare’s udder

It can fill the vessel up to its brim;

As an offering, We make this milk libation.

When the mare’s milk libation poem is recited, one of the riders makes an offering of mare’s milk and shouts, “May we satisfy the mare’s milk thirst!” Others join him. The riders go around the tethering-line in a clockwise direction three times and come to the door of the ger. They dismount and lean their lasso poles over the roof of the ger. They then bring the pail of milk into the ger and place it in the khoimor or most sacred place in the ger. After completing the milk libation, they bind one sacred scarf to the mane of a stallion and another to the neck of the firstborn foal. They carry a plate of tiered cakes and other food from the tethering-line. They say, “How heavy, let’s rest” and “Let’s move”. They pretend that they are unable to carry them to the ger. In such manner they come to the door of the ger and shout, “We have brought dairy products of the milk-libation ceremony.” The head of the family comes out of the ger and says “Did you have a good trip?” One of the people answers, “We had lunch at the rich spring and spent a night at a place with rich treasure.” They offer the products to the head of the family. The head of the family asks, “What have you brought here?” One of them replies: This is the wether Which goes at the head Of the thousand sheep, Which is the best Of the ten thousand sheep.

This is the weather,

Which is slain and blessed

With the libation of milk from a

Bore a colt with a gold chest

Then the plate of mutton and other products are offered to the head of the family. He assigns two people to place the tub of mutton and other products before the fermented mare’s milk container. These people slice the mutton and apportion a slice of mutton to each attendant, except for the portion of wether and the stomach. The weather is picked by hand and the stomach is cut and mixed with noodle soup. All those attendants share the resulting noodle soup. The stomach is a symbol of abundance; the weather is a symbol of firmness and strength. 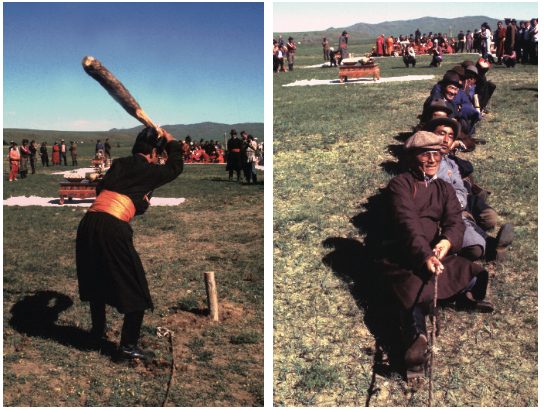 Then the feast of mare’s milk-libation starts. The general proceeding is the same as other feast proceedings. But their contents are different. It reflects the manner and movement of tethering foals or colts and mare’s ferment milk-libation, for example.

It starts by describing the rain and the bounty of nature in the summertime, such as when nature is verdant due to the nutritional rain, which falls from dark blue clouds moving through the silver blue sky. It is on this verdant pasture that generous mares graze and their milk-yield increases:

Is stretched out in the north

Who have strayed over the valley

We also recite poems concerning mare’s milk libation, which uses a particular poetic rhythm: May your tethered foals and colts Multiply like antelopes; May your haltered foals and colts Multiply like sand grouse; May your dairy products cover the roof of your ger And your domestic animals cover the valley; I raise this beneficent benediction In such a manner we wish to increase the horse population and to make dairy products abundant.