How Mongolian Great Queen(Alungua) Taught Us About Teamwork

The legends are a popular genre of prose oral literature. The real-life legends are always complimentary expressions of historical events within folk literature. Even though the historical facts are usually adorned with fanciful magic and metaphoric devices, these often later became historical legends. In other words, old sayings are enriched. The old legends can be reminiscences of past feats, legendary deeds, or the origins of the names of mountains, rivers, cities, and towns. The Mongolian Great Queen Alangua

The most ancient legends are the ethnographic legends. These are often about the lineages of clans or tribes or explorations of their progenitors.

The sons of Torgoljin were Duva-sokhor and Dobu mergen. Duva-sokhor has a single eye in the middle of his forehead and he could judge the distance three day’s journey. One day, Duva-sokhor with his younger brother, Dobu mergen, ascended Mount Burkhan-khaldun. When they were on the top of the mountain, Duva-sokhor looked round and saw a band of nomadic people who were approaching the Tunggelig stream. Duva-sokhor said, “There is a beautiful maiden sitting in the seat of the covered carriage drawn by an ox. If she is not betrothed to any man, let us beg for her hand for you, my brother Dobu mergen.” He sent his brother Dobu mergen for a closer look. Dobu mergen reached those people and found a really charming maiden who had won renown and was not yet betrothed to any man. Her name is Alangua. She was born from Bargujin gua, wife of Khorilar 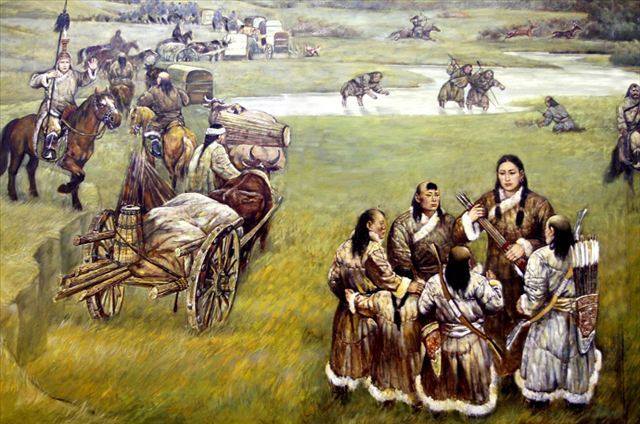 dai mergen in the Arig-usun of the Hori-tümed country (the country of Hori-Buriad). Bargujin gua was the daughter of Bargudai- mergen, of the Bargujin family, and from a far-away land. This band of people had had a row with their own tribal fellows and separated themselves from them. They then moved to Burkhan-khaldun after hearing that the place teemed with game, including sables and squirrels. They wanted to meet Shanch Bayan-Uriankhai, who alone established an altar on the top of a mountain. Alangua born of Arig-usun, daughters of Khorilardai mergen of the Khori-tümed, was beseeched. This was the initial rite of Dobu mergen’s marriage. Alangua was married to Dobu mergen and bore him two sons, Bügünüdei and Belgünüdei. Duva-sokhor, the elder brother, had four sons. Before long Duva-sokhor died. After his death Duva-sokhor’s four sons did not claim kinship with their uncle. They instead held him in contempt and moved away. They became the Dürved clan. After this, one day, Dobu mergen climbed up Togotsog Heights to hunt. In a forest he chanced to meet a hunter of the Uriankhai tribe who had killed a sorrel and was roasting its short ribs. Dobu mergen said “Dear fellow, let us share a slice of good luck.” The hunter agreed and cut into its head with the pluck and skin of the quarry. Then he took the head with the pluck and skin, and gave Dobu mergen the whole venison. Dobu mergen took the whole venison on the cart and plodded along. He chanced to meet a poor man and his son, who were walking hand-in-hand. He asked, “Who are you?” The old man replied, “I belong to Malig bayagudai. Now I am wretchedly poor. He begged for a piece of venison from the quarry and offered to give his son in reward. Dobu mergen accepted the offer and cut one piece from the hind leg of the quarry and gave it to the poor man and took his son, Dobu mergen, and made him a servant. Before long, Dobu mergen died. After his death Alangua was a widow, but she bore three sons. They were named Buha khatagi, Buhatu-salji and Bodonchar-munhag. Belgünüdėi and Bügünüdei, the two sons begotten of Dobu mergen, talked with each other secretly about their mother, Alungua, saying that even though she had no husband she bore three sons. In this house there was only man, Malig-bayagudai. They must be his sons, they decided. The mother Alangua learned of her sons’ surreptitious talk about her.
One spring day, mother Alangua boiled some meat that she had long kept in store. She then made her sons Belgünüdei, Bügünüdei, Bukha khatagi, Buhatu-salji and Bodonchar-munhag sit down in a semi-circle, gave each an arrow, and told them to break it. They broke their single arrows easily. She then bound five arrows together in a bundle and gave it to them to break. The five sons took the five bound arrows and despite the best efforts of each of them, no one could break them.

Then mother Alangua said, “My Belgünüdei and Bügünüdei, you two talked to each other about your mother who has borne these three sons. You questioned the truth about whose sons they are. This doubt is reasonable. Every night a man who looked ghostly in the darkness, sneaked through the tiny crack in the crown of the ger. He caressed my abdomen and his light sank into my womb. Then he slipped out before day light came. He scampered away the same way that guilty dogs do, wagging their tails as they go. Why do you speak with such insolence? It must be evident to all of you that my new sons are the sons of heaven. Why do you compare them to persons of low pedigree? When they become lords of all, then the ordinary people will recognize them.” Alangua addressed these words of admonition to her five sons. “You, five sons were born of one womb. If each of you keeps to himself, like those single arrows, anybody shall easily defeat you. If you remain together and unified, then, like the bound arrows, none can vanquish you”.

Legendary Names of  Places or Rivers

The legendary names of places are linked to historical events. For example, there are many names or places in central. Mongolia which are mentioned in the Secret History of Mongols. The name of Mt. Burkhan Khaldun started including Tsenkheriin gol, khar Zürhenii Khökh nuur, Bürig erig, Khorhanag Jubur ancient Kharkhorum city, Khödöö aral, Avarga balgas, Tuuliin khar shugui, Mt. Lakh (battle place where the battle between Tayan Khan from Naiman and Chinggis Khan was fought). These names written in the chronicles are still in active usage. These legendary names of places and rivers are connected with local scenery, resources, and places of worship. Some of them are described as having picturesque shape. The Legend of Noyon Bogd and Khatan Sevrei of Umnugobi aimag (province) and the Legend of Eej Khairkhan of Bayan Tooroi sum (country) of Gobi-Altai aimag have examples of fanciful and picturesque imagination.

There are legends and stories concerning the way of life of the Mongols, depicting nomadic pastoralism, culture, daily life with the livelihood, struggle, wish, and aspiration of ordinary people, which usually found with the reflection of individual thoughts. The protagonist of such types of legends can be anyone, such as a wise judge, famous wrestler, beautiful woman, swift horse, dexterous artisan, and ordinary herder.

Legends of Culture and Custom

The Legend of Horse Head Fiddle

Namjil, a horse breeder of the eastern periphery, was conscripted into the army and served at the western periphery. When he sang a song in the tuneful voice, local mounted men dismounted and listened to his singing. People stopped walking and listened to his singing. They extolled and called him Cuckoo Namjil after the singing ability of the cuckoo bird. Cuckoo Namjil served there for a long time and fell in love with a daughter of the local nobleman. But when his term of military service ended, he had to go back to his birthplace. The daughter of the nobleman gave him a horse with concealed wings and asked him to fly with this horse to meet her. Namjil did this, coming back to his birthplace during the day, where he tended horses and looked after his parents, but then flying back to see the daughter of the nobleman each night. A slave girl noticed that he was away at night and suspected him. She checked Namjil’s horse. That night, Namjil had forgotten to conceal his horse’s wings. The slave girl examined the horse standing at its hitching-pole, and saw the two wings of the horse fluttering. She cut off those wings. As soon as the legend of HORSE HEADED FIDDLE wings of the horse were cut off, the horse died. Namjil grieved greatly at the loss of the horse and clipped his horse’s mane and tail and twisted the hairs. And then he flayed the thin skin of his dead horse and stretched it. He cut off wood from a tree and sawed and lumbered it. Then he put all of the pieces together in a good arrangement and found a way to make a melodious sound from the instrument. He fixed the horse’s shaped head on the top of his fiddle and two pegs on the neck of his fiddle. He attached two lines of hair-strings on the front of his fiddle to the bottom of a box of his fiddle. He made a bow by tying two ends of his narrow willow. The bow was covered with the tar of pine. By this, he produced melodious and various sounds. In recognition of his good horse, he invented the horse-headed fiddle, which can produce the sounds of neighing and whinnying; it can produce the sounds of trotting and clopping. From that time on, Cuckoo Namjil was happy to play this fiddle and was in ecstasy hearing these tuneful sounds. This is how the horse-headed fiddle originated.