Military conflict between Xiongnu and Hun dynasty. Held in the territory of today’s Shanxi province, in 200 BCE. The main combat was held in the Baideng Mountain, near Datong. In this combat, the Xiongnu was commanded by Modu Chanyu and the Han by the Gaozu emperor. Xiongnu had 400.000 cavalries and the Han had 320.000 soldiers. The main reason for the war is the policies intended by Han, those are to invade the Xiongnu with the power of soldiers and to make them a subject of Han. Basically, Han Xin or Han wang of the Han made a fight against Emperor, Gaudi and he wanted the support of the Xiongnu.

At the time of the establishment of Han in 202 BCE, Han Xin, an aristocrat, was granted an estate in Henan province. Nevertheless, it was changed for where is now in Shanxi province under the pretext of protecting the boundary. Actually, he wanted to make Mayi city the capital of his planned empire, as being much closer to the boundary. At the same time, the Xiongnu launched an attack and besieged Mayi city. So Han Xin had no way to conduct a negotiation with Xiongnu. On contrary, this situation caused Gaodi Emperor to suspect that Han Xin would betray Xiongnu. Falling in an ambiguous situation, Han Xin joined Xiongnu and decided to destroy Han. In 200 BCE, the Xiongnu army, commanded by Modu Chanyu invaded China and attacked Zhiyan through Mayi city, surrendered by Han Xin. Emperor Gaudi sent 600.000 soldiers against the Xiongnu, so that, the Xiongnu thinned the main force out and besieged the leading troops together with the emperor of Han near the Baideng Mountain, in the north of Shanxi, after the disruption of their force through the way of kilometers in distance. There was a non-stop flight that lasted a week in winter, with the Chinese soldier who finished all the food and was not able to pull the bear bow because of starvation and chilly coldness. So, the Xiongnu soldiers on four coat-colors of horses made an attack and shot in four turns. Emperor Gaudi in such a difficult situation was advised by a  dignitary named Chen Ping and decided to send a large scale of the present to Yanzhi, wife of Modu in order to persuade him to stop besieging and if so, they would be ready to compromise multilaterally. Modu received their proposal due to his wife’s words “There is no need to upset each other. Even though you captured Han, we cannot adapt to the new land” she added “The Emperor of Han is accounted for a wise man” and Han Sin’s promise to send his army, what was not fulfilled.

After the defeat at the Baideng. Han Dynasty was aware that they could not depress Xiongnu with a force of the army and decided to make “A Marriage Treaty/ A treaty of Perpetual Peace” and to give a tribute. Since the treaty was drawn in 198 BCE, the Han Dynasty agreed to give his princess to Chanyu and also a large-scale tribute Xiongnu as named a present every year. In addition, the demarcation of the boundary with the Great Wall is considered to have a historic significance.

Han Dynasty stopped boasting and officially recognized Xiongnu as the most powerful Empire that would be coincided with the Han Dynasty. The basic provisions of the “A Marriage Treaty/ A treaty of Perpetual Peace” helped to the peaceful relationship between them both and became a principal model for following treaties between Nomadic Empires and China for hundreds of years.

Although the treaty was made after the war at the Baideng, Xiongnu went on supporting Han Xin, so that, there was unrest in North China for three years. Also, Chen Si who was a commander of Zhao and Dai Wang Ling’s army betrayed and joined Han Xin and this event was action like pouring oil on flames. Han Xin was killed at the fight in 196 BCE but it was not rested along the north boundary yet, caused by an uprising in Yang Wang Ling’s territory against Han Dynasty and revolts mutinied by Li Guan in some provinces from north to east deepened on Xiongnu. All of them were historic events to attempt to solve the domestic problem of relying on Xiongnu who was thought to have the most powerful army at the same time. In fact, the flourishing of Xiongnu is directly related to the war at the Baideng and the subsequent events. 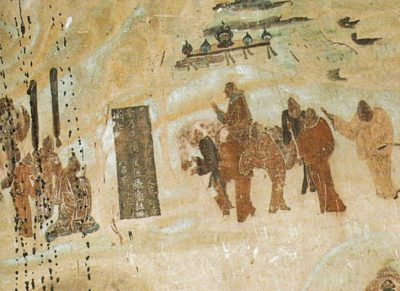 The battle between Xiongnu and Han near Turpan city in modern East Xinjiang in the winter of 67 BCE. Wugui Wang led the Xiongnu army and Zheng Ji led the Han forces. Xiongnu army size is not clear, but from Han, there were 1500 Chinese soldiers and 10.000 soldiers from allied local city-states. This battle was an aggressive attack from Han to control one of the important parts of the northern route of the Silk Road, the actual Turpan.

When Jushi capital city Jiaohe was surrounded by a stronger army from Han, Wugui Wang surrendered. A small number of support military forces came from Xiongnu, but they were defeated and pulled back. Chinese appointed a governor of the city with fewer military forces, but they were afraid of a counter-attack from Xiongnu and run to Wusun to the west. Soon a big army of Xiongnu came and appointed Doumo as a new governor of the city and evacuated Jushi inhabitants to the east.