Fighting between Xiongnu and Han army near the Talas River in autumn and winter of 36 BCE, present Taraz city of Kazakhstan. Zhizhi Chany is headed by Gang Yanshou and Cheng Tang. Xiongnu army consisted of 3000 Xiongnu, 10000 Kangju warriors, and the Chinese army consisted of 40.000 land forces, a few numbers of cavaliers, and support warriors from allies of Tarim basin. Talas river was the core point of Chinese warriors to pass through the northern border. Later, Tang warriors passed over again to the north and fought with Arabian warriors near the Talas river in 751 CE.

Zhizhi and Huhanye’s two brothers disputed the Xiongnu throne in 56 BCE and incited sedition. Zhizhi Chanyu was defeated in this fight and moved to the west. He reached to Semirechiye and continued his political and military activity. First of all, he controlled the Kangju people, and defeated the Talas river, he built the fortified city which is circled by an earthen wall, double wooden abates, and a watchtower for 2 years 500 people.

In 36 BCE, Chen Tang the deputy governor of the Western Regions claimed that Zhizhi was planning to build up a great empire and proposed a preemptive attack. He rises up an army and marched west on both sides of the Tarim Basin, reunited near Kashgar, and moved across Kangju territory reaching the western shore of Lake Balkhash. The Chinese army camped about 30 li from Zhizhi’s fortress and the two sides exchanged rather hypocritical messages. They then moved to within 3 li of Zhizhi and fortified themselves. The Xiongnu sent out several hundred cavalries and infantry, but they were driven back into the fort and managed to burn part of the wall. That night several hundred Xiongnu horsemen tried to escape but all were killed. Zhizhi himself thought of escape but decided to remain because he knew that he had too many enemies in the surrounding country. Zhizhi’s queen and concubines shot arrows from the ramparts. Zhizhi was seriously wounded by an arrow. Shortly after midnight, the outer walls were breached and the Xiongnu retreated to the inner citadel. At this point several thousand Kangju horsemen appeared and attacked the Chinese in the darkness but were unable to accomplish anything. When dawn broke parts of the inner citadel were on fire. The Chinese piled dirt on the citadel walls and clambered into the citadel. Zhizhi and a hundred or so warriors retreated into the palace. The palace was set on fire and attacked from all directions and Zhizhi was mortally wounded. 1,518 Xiongnu died, including the crown prince and Zhizhi’s wives. 145 were captured and well over 1,000 surrendered. The soldiers were allowed to keep their booty and the surrendered Xiongnu were distributed to the fifteen Tarim city-kingdoms that participated in the battle. Zhizhi was the only Xiongnu Chanyu killed by the Chinese. 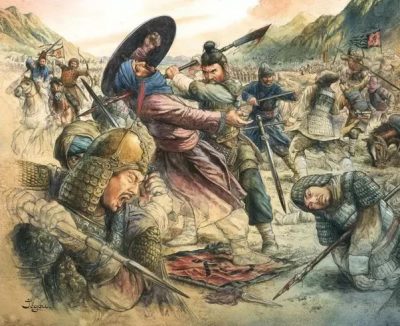 Xiongnu period walled settlement. Situated on the foot of a small hill of the southern slope of the Khorkhiin Nuruu mountain range, the north side of Borzon Gobi, in 30 km south of the Nomgon sum center, Umnugobi aimag. As the ruin was damaged by rainfall, wind, and animal foot, the north wall is comparatively complete, and most parts of the west and the entire east wall are blurred. The north part of the wall is 180 m in length, 10-16 m in width, whereas the west part is 110 m in length. The wall is built up directed to the straight north. This site was first explored and described by Kh. Perlee, in the 1950s. As a result of excavating in a small area of the site, Perlee found some fractions of pottery similar to Xiongnu, a bronze arrow with a metal filament, pottery, and slag. Later, in 1976, D.navaan, a Mongolian archeologist studied and found some items including wushu coins, some pieces of bronze articles, and pottery sherds, and concluded that is dated to the Xiongnu period and 13-14th c. CE. in 1990, Mongolian-Russian archeologists revisited the site, determined its dimension and structure, excavated, and found some interesting findings such as 24 kinds of the arrowhead, a bronze, mirror, some fraction of 50 different designs of potteries, a bronze seal, some roof-tiles and wushu coins. Afterward, D. Tseveendorj, Z. Batsaikhan, and Ts. Turbat drew a conclusion on the basis of some written sources, that this settlement could be the Zhao Xin cheng city, which is dated to the Xiongnu period and was dedicated to Zhao Xin who was a military commander and joined Han from Xiongnu in 123.