Somewhat ignorant of European geography, the Mongols chose not to proceed westward. After the death of his eldest son Jochi, who had been in command of the western campaign, Genghis bequeathed to Jochi’s sons Orda and Batu Khan all the lands that Mongol horses could reach beyond Siberia.

Orda settled down in Western Siberia and established his White Horde, whereas Bat founded the Golden Horde west of the Ural Mountains. The expansion of the Bat’s domain in this direction was a matter of honor of the Mongols. Having the army under the command of Subeedei, the hero of the previous western campaign was also crucial.

The first victims of Subeedei’s soldiers were the Bulgars, the semi-civilized inhabitants of the Volga region. At the same time, an army led by Möngke was devastating the Kipchak Khanate in the lower parts of the Volga. In this way, disunity and conflicts at the time among the Mongols crossed the Volga and came face to face with Christian Caucasians. Throughout history, the Germans, Fortune Smiles Upon Europe Swedes and French had been trying to deal Bat then with Russia on its western flank, and every time they had been defeated. The Russians were powerful indeed, but for the Mongols who closed in on them from the east it took little effort to overcome them with strategy was to deprive Hungary of a single blow.

In terms of scope, the campaigns that the Mongols conducted in eastern and central Europe are insignificant among all the wars that they waged in the course of the thirteenth century. The defeat on the Khalkha River fourteen years earlier had not intimidated the Russians they remained there. When the Mongols came to Ryazan, one of the largest principalities of Russia, and offered peace in return for one-tenth or its riches, the Russians response was, “Come and take it over our dead bodies!” Mongols promptly turned Ryazan into a heap of ashes and headed westward in the direction of Russia’s important trading city of Novgorod. 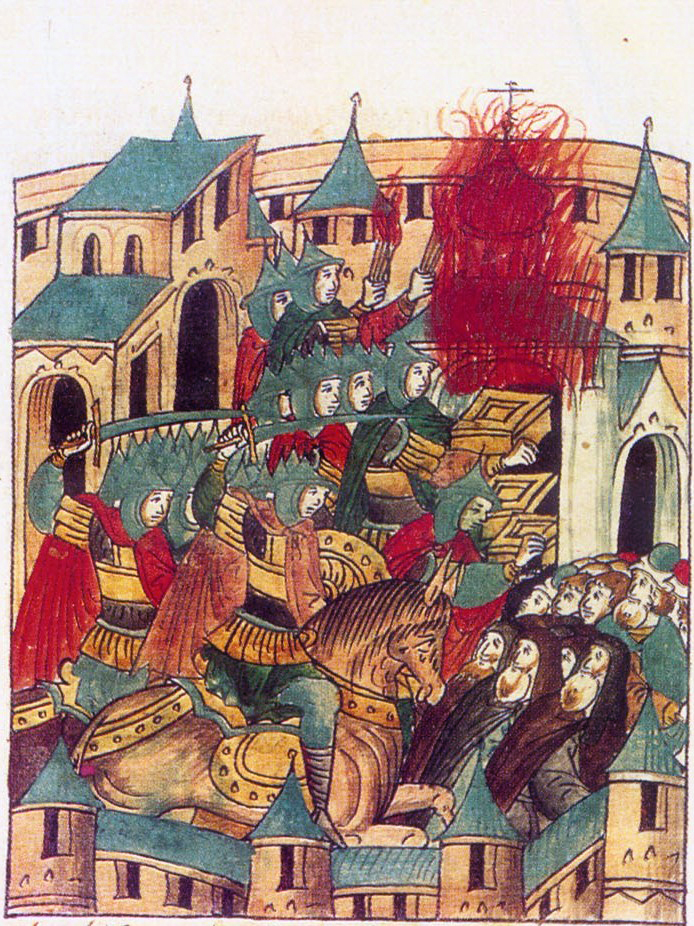 Their march was disrupted somewhat by nature since spring had set in and the snow had melted to mud, showing their progress. Still, many Russian cities and fortifications fell one after another and soon the Mongols found themselves at the walls of Kiev. The citizens of Kiev fought fiercely until they were forced to give up their city on December 6, 1240. Kiev had developed into a significant center of the Byzantine, civilization, but now it was reduced to ashes. The famous Russian historian Karamzin wrote that in military terms, the. Russians were not inferior to the Mongols, as they had repeatedly beaten the armies of the civilized West and Greece; rather, Bat succeeded in taking advantage of the disunity and conflicts at the time among Russian princess of the time.

Bat then turned his reins toward Europe’s greatest attraction for nomads, the Hungarian steppes. As Poland and, Hungary were allies at the time, his strategy was to deprive Hungary of getting any help from its ally. He first attacked Poland, burning down its capital, Krakow. Subeedei once again proved his, the campaigns that the But while Europe is insignificant among all the Europeans, terrorized by the ferocious onslaught of the Eastern invaders, were negotiating the creation of a unified front, Heaven suddenly had mercy on them.

If Ogodei and his elder brother Tsagaadai had not both died in 1241, and if Genghis’ grandson had not quarreled over the vacant royal throne, there is no telling how far into Europe the Mongol army led by Subeedei might have moved.

The Territory of Batu Khan’s Descendents

Jochi and his descendants ruled a territory stretching from the Altai-Sayan-Tenger mountains to Khwarazm, including the Syr Darya River valley. The territory stretched further, through the Caspian Sea, covering most of Caucasia, passing through the Crimean Peninsula and reaching the lower parts of the Danube River. From the north-west, the Empire covered Russian principalities and stretched from the Bulgarian Empire of the Volga River throughout south and west Siberia and back to the Sayan Mountains. It was much bigger than Kublai’s Yuan dynasty.

Plano Carpini was a Catholic priest who set foot in the Mongol Imperial palace on the orders of Pope Innocent IV, during the time when Ogodei’s troops were sacking Eastern Europe and striking fear into the hearts of the Catholics. The Pope planned to stop the massacre of Christians, forge diplomatic relations and further join forces to fight against the Muslims. Plano Carpini and his companions traveled beyond the Volga River and met soldiers patrolling the border. They traveled with the soldiers to Batu Khan’s palace. From there they were brought to the Imperial Palace. By the time the messengers of the Pope, after a long hard journey, reached their destination, Ogodei had already passed away. It is said that the Ih Huraldai to officially proclaim Guyuk Khan as Grand Khan was taking place in the Shar Ordon. Plano Carpini wrote everything he saw in the one chapter of his book History Mongalorum, entitled Liber Tartorum (“Book of the Tatars”). His notes consisted of nine chapters of which the first eight chapters described the Mongol Empire, weather, customs, religion, behavior, history, politics and social etiquette. In the last chapter, he chronicles the lands he had seen along with his journey.