Great Chanyu of Xiongnu. Grandgrandson of Maodun Chanyu. Son of Ichise Chanyu. the 8th great Chanyu after Modun Chanyu. His brother, Guilihu, the 7th Chanyu during his only one year reign, was killed in a battle to seize back the land with Shoufan fortress in Ordor from a state. During Qiedihou Chanyu, aggressive attacks from the Han state activated and Xiongnu was facing political difficulties.

After the throwing Qiedihou Chanyu wanting peace, declared that “I am a child. How I can consider war when Han Emperor is older in age?” and he released and sent back imprisoned Han envoys. Han Wudi thought the above-mentioned declaration could be used to destroy the independence of Xiongnu and make Xiongnu independent of the Han. At that time Han dynasty himself was also impoverished due to long war years. Envoy lead Su Wu was sent with presents from Han in 101 BCE. The situation was ar different than thought Wudi when Qiedihou did not give chance to raise discussion about their submission. Su Wu with his deputy Zhang Sheng thought of a plan to collaborate with Chinese natives in the Chanyu court, take the queen mother of Chanyu as a hostage, and kill Wei Liu, a Chanyu advisor with Xiongnu-Chinese mixed blood. They also tried to bribe Gou wang and Yu Chan, close nobles to Chanyu. However, this conspiracy was discovered and naturally angered Chanyu. He executed those who betrayed and offered prisoners to submit to him accepting their guilt. Su Wu denied to submit to Chanyu and was sent on exile to Baikal Lake. After 19 years in exile, he returned to his homeland.

Because of Chinese conspirators, the relationship between the two powers worsened and in 99 BCE great army of Han entered Xiongnu on three fronts. Han general Li Guangli attacked the Western Tuqi Wang domain and killed and captured more than ten thousand Xiongnu on the way back he was caught in the blockade, lost most of his warriors, and barely survived. The second Han army did not encounter the Xiongnu army and later returned back. General Li Lin of the Eastern army of Han was surrounded by Xiongnu and fought with Qiedihou Chanyu, who was defeated and captured. Only 400 men from his army got back. According to Han state law, if Chinese ministers, noblemen, and generals were captured and surrendered due to a stronger opponent’s force, they would be executed for betrayal, and/or one of his family members was to bear this punishment. Captured Li Lin had no way to return back, so he submitted to Xiongnu and agreed to serve them. Qiedihou gave his daughter to marry, made him a governor, and sent him to govern remote Qiangun tribe land in the north-western periphery of Xiongnu. Li Lin loyally served Xiongnu. Archeologists discovered the ruin of his palace in the lowland of Minusinsk and carried out an excavation. 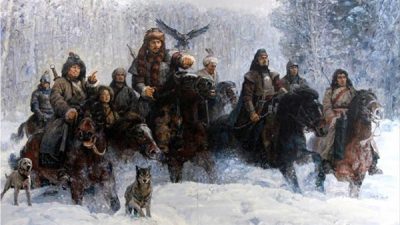 The submission of General Li Lin to the Xiongnu left a deep impression on China. It was unimaginable for the great General of Han to surrender to the enemy and was considered to be a great sin. His mother was executed. Ancient historian and well-known scholar Sima Qian tried to save his mother’s life saying that general Li Lin must have been in the intricate situation but was claimed to be guilty of wrongdoing himself. He was centered and thrown into prison. Two months later he was released and promoted to ahead of Royal chancellery by Wudi.

This was a big victory over aggressive attacks from Han in the history of Xiongnu (Qiedihou). Two years later, in 97 BCE Han decided to take revenge and sent an army led by General Li Guangli but was defeated again. Qiedihou Chanyu was a skillful military leader and a talented organizer who saved his homeland in difficult periods.

Xiongnu period cemetery in Buriatia. Covers totally 65575 square meters, were identified 84 tombs. The cemetery was discovered in 1950 by Russian scholar A/P/Okladnikov, A.D.Zaporojskii, and R.P.Tugutov. In 1955 A.Vdavydova make a plan of the cemetery. In 1957 R.P.Tugutov and N.N.Mamonov carried out the first excavation, and in 1961 R.P.Tugutov and E.A.Khamzina excavated 1 burial, after that in 1965-1966 P/B.konovalov excavated 18 burials, They were able to discover a large number of artifacts, including different kind of pottery, iron arrowheads, knives, belt decoration and hooks, horse equipment, bone and horn artifacts: chopsticks, bow plates. This collection is now in Kyachta regional museum.

Xiongnu noble tribe or clan name. The chapter about Southern Xiongnu of the “Hou Han Shu”, talking about the events held in 40-50 CE, described that there was a permanent marriage treaty system between the ruling Kuanti clan with other 4 noble clans as Huyuni, Xiubi, Qiulin, and Lan. Most researchers support the idea of G.Sukhbaatar that the main clan of Xiongnu such as Huyan, and Lan, attested also between Xianbei, which were the remains of the tribal dual organization.

In the framework of the Theory of Formation, the land is considered an important industrial tool. As for the nomads, the land becomes a production tool together with livestock. The principle for using pasture causes it, as the theory explains. until the 2nd half of the 1950s, Soviet researchers raised a debate about the fact that the economic basis of feudalism in Mongolia was only land, or it was only livestock, or it was both of them together. Sh. Natsagdorj put forward his idea of the fact that a correct way of explaining the basis of feudalism in Mongolia is not emphasizing only land or livestock but taking both of them in their dialectic relationship. This principle of the Marxist methodology of land-owning relations description existed for a long time in our historical documentary and Xiongnu and Xianbei society was compared with the primitive kingdoms of western Europe of the 3-5th centuries CE.

The land was under state property in the Xiongnu Empire. Modern Chanyu was not possessive about his best horse and loved the queen when Donghu people asked for them. However, when they asked for a piece of land between the two countries’ border which was not inhabited, he executed the officials who pretend that they agreed to give the land by saying that the “land is the basis of a country”. Moreover, he invaded the Donghu pretending the demand for them was aggression. This historical event is evidence of the fact that land was in the possession of the state. 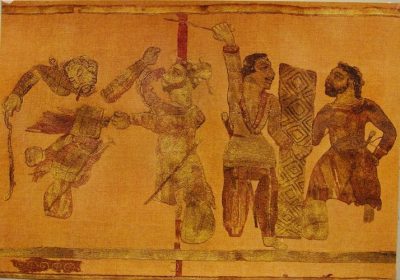 Our researchers believe that under the Treaty established in 198 BCE, the Great Wall became the border between Xiongnu and Han. The Donghu coveted the piece of land between Xiongnu and Donghu. In addition, there was the official named “Outo wang” who was responsible for the border guard. All of these are sufficient evidence that land was state property in Xiongnu.

The Xiongnu people developed the production method of nomadic husbandry in which land-owning efficiency was earned indirectly. For example, Tumet aristocracies from South Mongolia in the late Middle Ages, let their subjects put their livestock out to pasture on their possessed land and regulated their movement. Nomadic economy, in which the strength and fatness of livestock depended on the pasture and water, created a traditional culture to love the land, treat the nature and environment appropriately and became a vital basis for state policy. For instance, clear evidence of this is that there is information about the fact that Xiongnu had its own special map of its territory. However, representatives of the Non-Marxist theory considered that the basis of the nomadic economy was not connected with land relationships and so on. Thus, although they did not deny the interrelation between land and livestock, they considered that land did not have any decisive influence on the nomadic economy. It is viewed that, as for nomads, land’s value increase when they communicate and have dealings with settlers.