The Mongols could not tolerate the suffering of the communist experiment anymore. Some of them fled the country and the ones who stayed were burning with so much rage that they were ready to explode at the slightest provocation. But documents of the time indicate that there were no preliminary preparations, plans or agreements for a revolt.

On April 12, 1932, ten monks from Hyalgant monastery in Rashaat sum of Hovsgol aimag first lit the spark of a revolt. They joined the monks who had been punished and one hundred of them started on their way to the center of Rashaat. They were led by the former feudal lord. Choijilsuren, the director of a Cooperative named Jamsrandorj, and a leader of a collective farm, Sanjid. The day after they came to Rashaat, they founded a committee named “Ochirbat’s Ministry” after a former hoshuu noble. They issued their stamp and named themselves the yellow soldiers.

The Central Committee and the government sent the Internal Affairs Committee and the People’s Army Council to suppress the armed revolt in Hovsgol aimag. In addition, the government’s Plenipotentiary Commission, headed by one of the three Central Committee secretaries, j. Lhumbe, left Ulaanbaatar for Hobsgol on April 14, on an urgent mission to organize all forces against the rebels. Two days later, the Nineteenth Resolution of the Presidium of the Central Committee was issued. It was claimed that the revolt had been traced to Japan. Another Plenipotentiary Committee was founded, consisting of five people, among whom were Lhumbe (of the Mongolian People’s Revolutionary Party), Givaapil (from Internal Affairs), Sanjmyatav (People’s Army), and Tseden-Ish (Mongolian Union of Revolutionary Youth). This Committee had the authority to judge criminal cases on the spot, punishing the rebels with the death penalty. Lhumbe’s soldiers “freed” Rashaat from the rebels on the tenth day of its occupation.

The rebels have occupied Rashaat Ih-Uul, Namnan, Arbulag, Tsetserleg, Bayantsagaan and other sums in Hovsgol aimag. The rebels killed six people in Rashaat. Lamas and some party and union members joined the rebels, the number of which reached five hundred as of April 14. Apart from propagandizing that “religion will flourish, the people’s state will be abolished, and Panchen Bogd will occupy Ulaanbaatar,” they are robbing cooperatives and collective farms.

Circumstances Take a Turn for the Worse

The revolt spread across Mongolia just like a fire in dry grass. By May the revolt covered Uvs, Hovd, Zavhan, Gov’Altai, Bayanhongor, Bulgan, Ovorhangai, Omnogov’, and Selenge aimags and, of course, Arhangai and Hovsgol. Additionally, considering that a huge number of people were emigrating from Hentii, Dornod, Sukhbaatar, Dornogov’ and Bayan-Olgii, it is possible to say that the revolt had spread throughout all Mongolia. The hottest spot of the revolt was Tariat and Tosontsengel sums. From this area, the rebels were attempting to occupy Uliastai and the center of Arhangai. Therefore the Minister of Industry, G.Sodnom, who had just returned to Ulaanbaatar after suppressing a revolt in Omnogov’, was immediately sent to Arhangai. The Minister, along with twenty other people, was caught and killed by the rebels on May 13th. The decision to use the Regular Army against the rebels had been made on May 12th. An emergency war situation was announced in the centers of the revolt, Hovsgol, and Arhangai. A Temporary Defense Council’, led by the Chairman of the Political Department of the Army, D.Olziibat, was formed, and all forces fighting the rebels were assigned to this committee. Mongolians the national transportation company was commandeered for transporting soldiers and weapons.

Because the revolt had happened so suddenly, the used by the rebels were laughably insufficient. They had at their disposal only a few flint guns and one or two military field-weapons left from the days of Baron von Urgent. But they had obtained some users and even machine-guns from captured soldiers.

Information about the punishment of the rebels and the names of the main leaders of the revolt shows that at least half of all participants in the revolt were not lamas and nobles but ordinary people. Generally, people from all spheres of society participated in the revolt. Several Parliament members and plenty of party and union members took part.

The Mongolian Revolutionary Red Army now came to the aid of the state. On May 19th Olziibat started, “More than one hundred rebels were discovered and attacked by air-forces and machine-guns at the Gichgene River. I do not know how many of them were killed”. Later near Tariat, the following report was issued: “More than 600 rebels were defeated by the air-force, artillery, and tanks.”  The punishment of the rebels turned into some sort of competition.

Hovsgol communicated that “there are 2,117 rebels captured from Rashaat… and altogether from twelve different places, 260 of those were killed. “On July 23, the Internal Affairs Committee of Zavhan reported that “six hundred and eighty-two rebels were captured. Forty percent of them are feudal lords; 60 percent are ordinary people. According to the field rules, 134 of them were shot, 410 were imprisoned, and 132 were released.” On August 5, a memo from Hovsgol recorded, “as a result of fifteen fights, 614 people were killed and 1,500 were captured. The Military Field Justice has sentenced to death the 285 most active rebels. The decision was substantiated by the fact that 70 percent of the sentenced are Party and Union members who joined the revolt.”

Although the revolt lasted until October, the main forces of the rebels were defeated in June and July. According to the official history of the MPR, the rebels destroyed forty-five cooperative, thirty-three sum administrations, robbed many schools and cultural places, and disrupted the communication system. The rebels were just as brutal as the revolutionaries. Barbarous rituals of shamanism and Tibetan Buddhism, such as cutting the heart out of a live man, took place frequently. Especially when their defeat was inevitable, the rebels turned into beasts. The revolutionaries used these facts cleverly in their propaganda.

Information about the involvement of the Soviet Army in the civil war in Mongolia is sketchy. Professor Nicholas Poppe, who emigrated to America during World War II, wrote in 1954 that “Soviet armored cars and planes were sent in”. Much later, the Air-Force Military Marshal Sudets said sincerely that the Soviet used weapons only against cruel monks and their nests, the monasteries. According to some sources, at the beginning of the revolt in Hovsgol, weapons were requested from the Tiinhen Frontier Detachment of the USSR. Also in a note from Uvs it is said that a detachment from Tuva takes to Mongolia to suppress the revolt. But it is clear that the Mongolian state acted towards therebls in accordance with Soviet instructions. Because the revolt occupied the whole country and created an unpleasant situation, the Soviets’ plans of building socialism in Mongolia were temporarily hampered.

Rumors About the Panchen Lama

Long before the revolt, there was gossip that the Tibetan Panchen Lama would come soon and protect religion throughout Mongolia. Many who emigrated from Inner Mongolia pinned their hopes on him. But the Panchen Lama couldn’t even help the Inner Mongolians. Clearly, this old lama who was unable to help others could not lead a plot to liberate Outer Mongolia. Still, thousands of Mongols looking for vengeance against the revolutionaries held onto this hope. In addition, the deeply and blindly superstitious Mongols did not have any intellectual leader after the death of the Eighth Bogd Javzandamba. They were grasping at straws. Many people were caught after letters they asked him for help and salvation by coming and defeating the Reds, were confiscated. Many of these probably did reach the addressee over the frontier, but the letters could not prove that the Panchen Lama planned to penetrate Mongolia with Japanese support; they merely revealed “conspirators”. 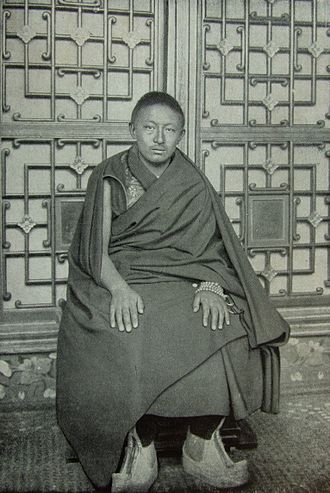 Just as any person or nation during great suffering believes in supernatural forces more than before and often blindly rely on anyone whom they think able to help them overcome their suffering, people believed the naive gossip that the Panchen Lama, not long after coming to Inner Mongolia, would make an armed intervention to save Outer Mongolia’s people, who had remained truly faithful to Buddhism, from the Red Danger. This gossip had been spread intentionally as much as by chance.