Under the Bogd Khan and autonomous governments, the Mongols, on their own initiative, attempted many reform policies, notwithstanding that they lacked organization and commitment. The Mongols had learned from the experiences of the past ten years that until the basic foundations of their society-the old, obsolete and traditional state structures were overhauled, reform could not be successful. This is precisely why the People’s Party, the nobles and the princes and the Bogd himself wanted to see reform proceed extensively and successfully.

So it was that during this time, fundamental changes were made in the state and social structures. The “Treaty of the Oath” (Tangargiin Geree), which outlined the basic principles of the limited monarchy, was of primary significance. Article one of the treaty declared: “Since Bogd Javzandamba Hutagt of Mongolia is the ruler of the Lamaist religion, he has no jurisdiction in political matters and will oversee all religious matters only, without any restriction”. Article one also said that though the government would acquaint him with the legislation, the Bogd Khan would have only one-time veto authority. This meant that Mongolia had a constitutional monarchy similar to Japan.

A government resolution passed on January 25, 1922, announced, “The serfs, as well as the nobles [will], be included among the sum’s menfolk”, putting an end, once and for all, to serfdom in the country. For the first time, modern civilian society was being established. Although the rights and privileges of the ruling class had diminished, and the social and legal status of the commoners in the society had improved with the elimination of the feudal system, it was still nothing other than a Bolshevik or a Marxist-type measure.

Several documents, such as the “Rules of the Local Administration”, “Rules of the Provisional City Administration” “Resolution on Completing the Foundation of Local Administrations”, brought about basic changes in the management of the state and the society and abolished the feudal system which had existed for hundreds of years. These documents also included, “Resolution to Confiscate Letters of Rights Given to the Princes and Nobles”, and “Resolution to Confiscate the Seals of the Monks of the Monks of the Ih Shav’. Laws were amended and many brutal means of torture were banned, allowing only a few more acceptable tortures like whipping and booting. Although many Soviet-type “red” laws were passed, these charges, in general, were designed to carry out reforms to bring about social progress in the backward nomadic society.

In keeping with the 1921 Friendship Talks with Soviet Russia, the Russo-Mongolian bank Project and the Russo-Mongolian Telegraphic News were set in motion. In June 1924 the Mongolian Industrial and Commercial Bank were founded in Huree and branches were later opened in Uliastai, Hovd, and Altanbulag. The bank had a monopoly, ownership was divided equally between the Mongolian government on the one hand and the Soviet State Bank and the People’s Commissariat of Finance on the other. The directorate, however, as well as nearly all the staff, was Russian. One Mongolian official was on the directorate. “The original capital was 175,000 Chinese silver dollars, which was later increased to three million”. Mongolia’s new monastery unit, the togrog was introduced at an exchange rate of 90 togrog 100 Chinese dollars. The name togrog, meaning “mushroom” or “round”, was in keeping with the Chinese cultural tradition of conceiving of monastery units as being round.

Danzan and His Dollars

Mongolia made several efforts to issue currency. During the time of Baron Urgern there was the paper currency called the Reserve, and it was valued through sheep, cattle, horses, and camels. Minister of Finance, S.Danzan issued a Mongolian Dollar. However, the dollar was Burt because the minister was killed before it was put out into the market.

S.Danzan believed that, since Mongolia was a feudal society, it would reach socialism through capitalism. He once wrote “The people of the word go through many stages, from wanderers and nomads to sedentary and civilized, and the process can be compared to steps either going up one by one or descending into the deep waters. If the orders are not followed, it would be unwise…” From his writings, it is clear that to Danzan, development without capitalism seemed impossible.

Danzan experimented with capitalism himself. He became a share-holder in an auto-transformation company and by working with American companies such as “Birdman”, “Smith” and “William”, he gained enough wealth to build three houses and purchase several cars. Also by demanding the payment of a Chinese company’s debts which had been compounded by the People’s Government, he was making an effort to receive more loans from China. 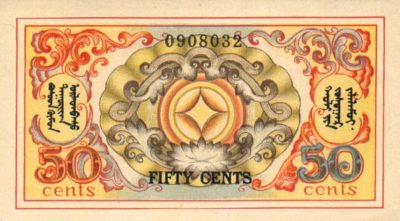