Custom of Helping Mother Animals to Accept Their Young

There is a specific ritual that is done in a tuneful utterance when a new mother rejects its newborn or when a newborn becomes orphaned. This ritual is believed to encourage the mother to allow the newborn to nurse. Our ancestors have long paid attention to animal behavior, character, and the sounds they produce. In this ritual, we Mongolians make a sound that imitates a sheep’s or goat’s bleating. We call ewes by uttering toig and call goats by uttering zuu zuu. When we round up flocks of sheep we utter guurgyi guurgyi, which is a call that separates lambs and kids from their mothers as they enter into their holding pens. We utter khoolboi before tying up ewes and nanny goats. We utter toor, toor which imitates the sounds of camels. When a female camel rejects its young, we utter khoos, which is a call to the camel to accept its young and which is sung in a slow tuneful melody. When a mare rejects its young, we utter guurui, guurui. When a cow rejects its young, we utter ööv in a tuneful melody. In the case of a yak, we utter khoor or sugai.

Some mother-animals reject their young by refusing to allow them to suckle, a situation that threatens young animals with death. It is, therefore, critical for animal breeders to deal with those mother-animals. They do this by trying to change the animal’s attitude, and a common way of doing this is by reciting a poem in a soothing voice to a tune that is terse, rhythmic, and melodious.

In the case of a mother camel or mare, this is a very painstaking job. Someone specialized in this field is invited to sing a song or play music to them. In addition, a herder can daub salt on the foals’ coat and let its mother lick it. They also daub salt on the tail or smear mother’s milk on the lamb. These tricks can have positive effects. Soaking the lamb’s coat in these ways can revive the smells of birth. 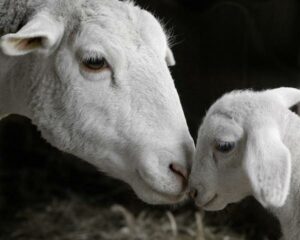 The lyrics of the songs the herders sing are devoted to persuading the mother animals to allow the young animals to suckle.

For instance, there is a poetic recitation which is sung as:

Why do you reject your lamb?

The scent of your milk is

On the tail of your lamb

The mild season has come

The mountains shall be verdant

Your udder shall be caked

What did you think of it?

There are many variations to these tricks, which aim to cause a mother-animal to accept their young. The origins of these words are likely very ancient. For instance, in order to cause a cow or camel to accept its calf, the newborn is hitched near to its mothers. Singers with a tenor voice are invited to sing Mongolian long songs, to sing poetic recitations in a tuneful voice, and to play a lyrical melody on the horse-headed fiddle or on a flute.

There is tune that is played on an Oirad fiddle which is very popular among the Dörvöd and Bayad ethnicities. This tune is used for causing a mare-camel to accept its newborn if she at first rejects it. When a mare-camel rejects its baby, the mother and newborn are both hitched together. The epic singer or minstrel is invited to recite the epic “Orphaned white baby of the white mare-camel”.