Customs related to the household and human life include social events that occur in the life of a family or community. Oral poetry and traditional customs express a family’s or community’s feelings of respect, well-wishing, or sorrow for a person or persons. Benedictions and songs are performed to a great extent in the celebrations of those events related to an individual’s household. They thus also express aspects of traditional ethics and morality, points of view, and senses of beauty of the Mongolian nomadic people.

If you look at the customs of the household superficially, it seems rather personal; indeed one member of society shares one’s exceptional experience with others in one’s own community. However, the oral poetry used in customary events of a Mongol’s household reflects characteristics of nomadic herder’s labour.

Mongolians have the custom of preparing children’s toys. Toys are not merely meant to amuse babies or infants, they can also symbolize auspicious omens. For instance, traditional toys can consist of felt cut into animal shapes with scissors, small bows and arrows, a herring-bone tag, or a bell. They are often dangled from the ceiling spokes of a ger. According to a fairy-tale, parents should hang a felt-shaped fox near the infant. If there is no felt-fox, a real fox will come to a sleeping infant and tell it that its mother had died. The infant will believe this and start to cry. The sly fox says, “Your mother is not dead, your mother is alive.” The infant will then become glad to hear this and will smile. If the felt-fox is present, the real fox comes and sees that it is not possible to cheat the infant, thus the infant with the felt-fox never cries while sleeping. It is a superstitious belief that infants converse with a fox in its sleep.

Custom of Wearing a New Deel 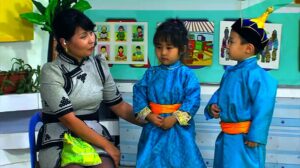 The general clothing of the Mongols is a traditional costume called a deel (gown). Mongols sew deels for their children mostly with sharp coloured fabrics, beautiful edging, and adornments. The following verse is told during the first wearing a child’s new deel:

Your front skirt is maybe accompanied by foals and colts

Your back skirt is maybe accompanied by sheep and lambs

Your inner skirt is anointed by fat and oil

Your outer skirt is decorated with thongs;

This year your clothing is cotton

Next year your clothing shall be silk;

May your clothing never be dirty

May your clothing never become frayed

But may you yourself be eternal!

Afterwards, the quilting of the deel is removed. The child is kissed and the new deel is blessed. A child wearing the new deel gets excited. It makes the parents happy. The child can show off the deel to the children of his or her neighbours, and their parents reward the child with sweets. The adult neighbours traditionally encourage children with sweets on the occasion of his or her new deel. 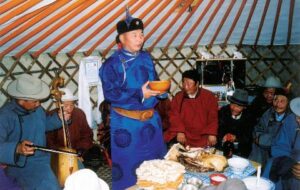 Mongolians celebrate important events with festivals and feasts, and these usually follow a well-established system. A good steward is selected to conduct the feast. It is unwise to interfere with the plans of the steward, even to change one’s seats without his or her permission. The steward, who knows the proceedings of the feast well, can decide when benedictions can be chanted, what songs can be sung, and what solemn ceremony can be performed in compliance with the established proceedings.

Such feasts have strict rules, which do not restrict the guest’s freedom to revel; they instead create favorable conditions for the guests to be comfortable. An address at the feast or celebration should be expressed in a concise and artistic language.

Just like the above mentioned rules, the treatment of guests, such as when tea is to be offered or how vodka is to be given, has a strict order. The first offering to a guest is tea, followed by a meal with meat, and then soup. At intervals, often marked by songs and benedictions, airag (fermented mare’s milk) and milk-vodka are offered to the guests according to established rules. When tea is offered, the following benediction is recited in the poetical sense.

This beverage is called tea

Which is a type of drink

Which is offered to a guest

Which is the best of all beverages, and

Which is offered as a gift to our guests

Please, everyone, have tea.

In case of a meal with meat, the follow benediction is recited:

Of the white-faced sheep,

This is the food for all Mongols;

They are arranged on a big tray;

Have all of you a taste!

These eulogized words are polite requests to invite guests to drink tea or eat their meal.

There is a custom to offer cups of milk-vodka to the adults three times. Generally, these cups of milk-vodka can be offered to only a person who has reached manhood. It was commonly unacceptable for those under 25 years to drink vodka.

There are also special benedictions. The benediction of the airag, which is uttered at the start and end of a feast, can include the following:

The pail of airag is placed in the middle of white ger;

It is the best part of a perfect beverage,

Which is the generous gift of flowers grown in the summer, and

It is proffered to all of you

As the kindness of mares.

In such a manner, the benediction begins as the lid of the churn is cleaned and opened with an honorable scarf. All the guests take their seats in the ger. The tea is offered to everyone. The head of the host family slices pieces of mutton, places them on a tray, and distributes them to every guest. The soup is offered to everybody. After this, the head of the host family explains the purpose of the feast and suggests the name of a steward who is skillful in managing festivities. All the guests may second the suggestion. Once a person is elected as a steward of the festivity, he can arrange everything. The steward may say, “All of you together with the head of the host family, made me a steward.”

The feast is conducted according to strict rules. Every guest should take his or her proper seat. Each person’s dress should be proper and their hat should be placed on their head. No smoking is allowed and no obscene words may be said. No brawling is allowed in any case. If anyone infringes upon a rule, he or she can be punished by being forced to drink a large bowl of fermented mare’s milk. The steward should sit on the upper end of the eastern side of the ger. Singers and fiddlers sit by the steward on the eastern side, where the women and children also sit. But men sit on the western side according to their age and rank. Most elders sit cross-legged on the northern part of the ger. The guests on the eastern side sit with their left-knee bent. The guests on the western side sit in the opposite manner. These raised knees on the both sides are meant to prevent possible evils.

The steward nominates one airag ladler (a person who ladles airag from the churn) and two cup-deliverers. Everybody who has reached manhood has to drink three bowls of airag before the feast starts. After taking three bowls of airag, the feast starts with singing the traditional long song “Tümen Ekh” accompanied on the morin khuur (horse-head fiddle). Singers sing three verses of the song, and all participants are invited to sing. Airag is offered to everybody at every break between songs. At some point, the steward announces a big break. After the break, the guests come back to their seats. The steward allows singers to start the next round of singing. A singer usually leads others in a song with refrains. Every guest can drink airag. The feast continues in this way. After three rounds of singing, the people at the feast gather in ger again. At this time there is no strict demand for drinking. But people listen to the singing while some of the guests take bowls of airag at their will. When the feasting is nearing an end, the head of the family announces, “Let’s see off the feasting”. The steward suggests that the singers sing a long song to end the feast. The singing starts:

Well, we enjoyed ourselves

At the joyfully wondrous feast;

Under this remarkable benevolence

After the song is sung, the head of the family asks the minstrel to utter a benediction. The minstrel takes a ladle from the airag churn, places it on the sacred scarf and says the benediction:

We stick to the established custom,

Even though it was very nice;

It was enjoyable for all the kin

To feast for a long time;

It is possible to stay the whole day

But we think about your day jobs;

It is possible to stay the whole night

But we think about your night jobs;

We wish your horses may increase to tens of thousands

Then the minstrel ladles up and pours out the airag in the churn three times before giving back the ladle to the airag-churn ladler.

This is common for an ordinary feast. If the feast is for a specific event, there can be other, particular rules for that feast. For instance, in the case of a ger-warming feast, the minstrel first says a benediction about the airag-churn and then utters a benediction of the ger. Then all the guests drink the airag and end the feasting. These feast-ending benedictions and songs are never to be taken lightly. People consider them necessary to restrain the over-enjoyment and prevent people from missing their work responsibilities.

There was the established rule when a feast must start and when it should end. Even the amount of drinking airag is taken into consideration. According to tradition, no feast should drag on longer than the appointed time. Feasts in honour of children and weddings, in particular, are traditionally ended before the setting of the sun.