As deer is one the most revered and sacred animals for Mongolians and an important source of their livelihood, Mongolians created a variety of games and toys named ‘buga’ (deer), such as, Deer Jirgens,

Bald Deer, Mountain Deer, Steppe Deer, Mountain and Steppe Deer, Mongol Deer, Four Deer, Tibetan Deer, and so on. Different shaped boards (usually round or rectangle) with various numbers and figures
are used for these types of games. Basically, stones and anklebones are thrown on the board and directed to move accordingly, aiming to block all of the possible ways of the counterpart. Although there are different variations with board shapes, cell numbers, numbers of the deer and fawns, the deer games share the same basic rules that the player who blocks the deer wins. 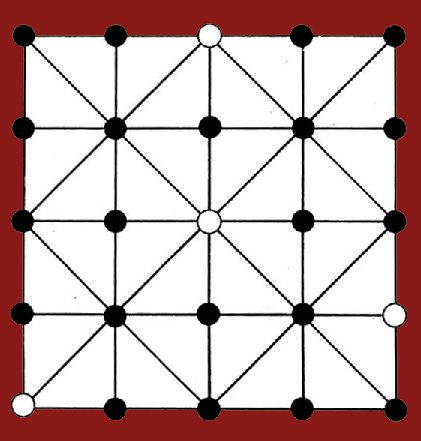 in turn in this way until the deer player finishes the deer. He/she then starts moving the deer and applies the same to the player moving the fawn pieces. The deer tries to eat the pawns and fans try to block the deer. When the deer is blocked and rests without any possible alternatives of movement, that player loses the game. Researchers vividly show that these kinds of board games are the ancestors of Mongolian chess.