One of the Mongolian traditional games is the disentangling game. Without a doubt, this must have been originated from a nomadic livestock breeder’s livelihood as a demand to untie and disentangle difficult knots, ties, and entangled things. Consequently, parents took much care to train their kids to learn how to disentangle things and created a variety of disentangling games. First-hand materials were a rope, thread, and whip-cord which were used for making diverse knots and used for children to untie the knots. For instance, “Khonin kholboo” (Chain stitch), “Bogtsnii uya” (Saddlebag tie), “Argamjaanaas biye salgakh” (Untie oneself from a tether), “Yesön nükh” (Nine holes), “Bögj niilüülekh” (Link the rings) and “Chödriin zangilaa” (Hobble knot) can be mentioned. There are stories that Mongolians would challenge the groom’s smartness by a game “Uurgiin huivnaas bögj salgakh” (Separating a ring from a string) and challenge the bride’s intelligence by games like “Link the rings” and “Run colts”. Over time, this kind of game becomes more and more challenging and sophisticated both in terms of used materials and designs. There are various metal cord games with many rings and loops to be separated from each other. For example, Mongolians would challenge their smartness by playing a game called “Nar sümbe”, which has a closed metal loop with nine circles to be inserted and released by eighty-one different ways. One of the types of disentangling games is the puzzle game. 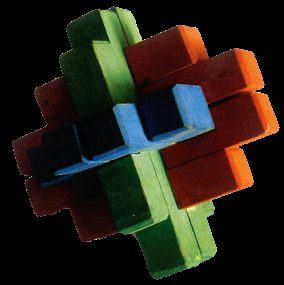 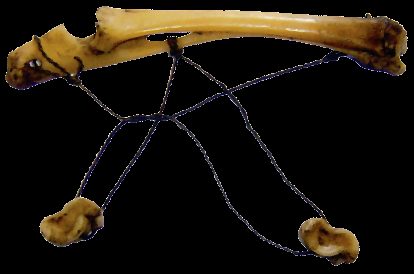 Mongolian puzzle games require patience and creative thinking from the player. This puzzle is highly important in developing both mathematical and technical brainwork. Puzzle games
derived from the daily life of nomadic Mongolians and the primitive forms of puzzles include joint parts that are used for constructing fences and various clutches and locks for diverse uses. It was gradually
developed and has led to the methods of constructing things that use no nails, such as “Shambaliin baishin” (Heaven’s house).

Puzzle games are based on the eleven primary ways of interlocking
wooden pieces. The earliest forms of these puzzles consisted of just two wooden pieces, but later the number of wooden pieces expanded. Some puzzles now have up to 673 pieces.

Over fifty years ago Z. Tümen-Ölzii found four pieces of wood in his mother’s chest and tried, but failed, to assemble them. He added two additional pieces of wood and, finally, was able to put the puzzle together. Since then Tümen-Ölzii has studied all variations of the Mongolian traditional puzzle games and has contributed to their development. During this time, he developed five new innovations and created around 3,000 variations of games drawn from more than 390 basic designs. He publicized his creations in over fifty countries around the world and opened a permanent exhibition for traditional games and toys. Consequently, he established the International Intelligence Museum in 1993 and expanded it to include a training and promotion center, aiming to develop the traditional game industry.

The puzzle turtle game, called “Shüteen” (Idol), is created in three different versions. One of them is cast with five kilograms of pure silver. A special award is offered to those who can assemble this puzzle in ten minutes. Such puzzles demonstrate a unique Mongolian intelligence.

Mongolian puzzle games include some that are very elaborate. There are Mongolian chess sets made of gold, silver, gemstones, and wood. Other puzzles include an ancient nine-stored pagoda consisting of 303 wood pieces, a modern ‘Megjidjanraisig’ temple with 375 wood pieces, and puzzles called ‘Eiffel Tower’, ‘Statue of Liberty’, ‘Egyptian Pyramid’, and ‘Taj Mahal’. These creations are more than just puzzle games, they are classic works made with interlocking parts.