The number of skins

Are the same as the sum of numbers multiplied;

The number of skins

Show the number of missed arrows.

How many arrows have scored a hit?

How many skins were hit?

How many arrows missed their target?

Who can tell it?

In oral arithmetic there is a system of calculating integers and fractions, pluses and minuses, as well as determining arithmetic terms. Let us take another example:

Who are hidden behind a spur,

To the eight skins of the sheep,

Behind the pairs of eyes,

The number of shots

Are multiplied by two numbers;

calculate the degree of the penetration of the shots. This kind of mathematical knowledge is the root of traditional Mongolian mathematics. Mongolians received this knowledge from the Hünnü. They used it to build buildings, dig channels, calculate the calendar as well as to calculate the positions of the stars, durations of day and night, the timing of the four seasons, the date of the next eclipse of the sun and the moon, and the beginning of the spring (or vernal) and autumnal equinox.Another traditional method of mathematics is counting. There is a popular concept of counting:

The number is a good word,

But it expresses something endless;

The armour is good clothing,

But it is not for a wedding.

Our oral literature says so.

The Mongolians identify over 60-digit-numbers, and consider them as both practical and abstract numbers. These  numbers have their roots in the ancient sutras from the eighteenth century. 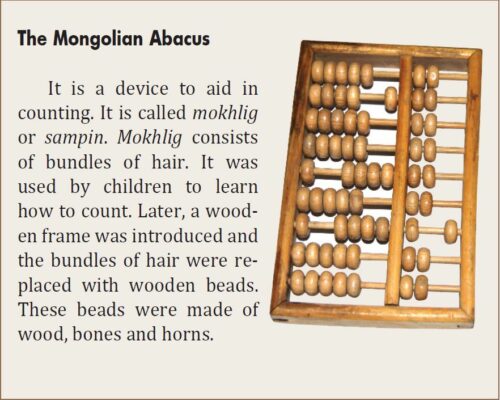