The Pendant of the Jade axe 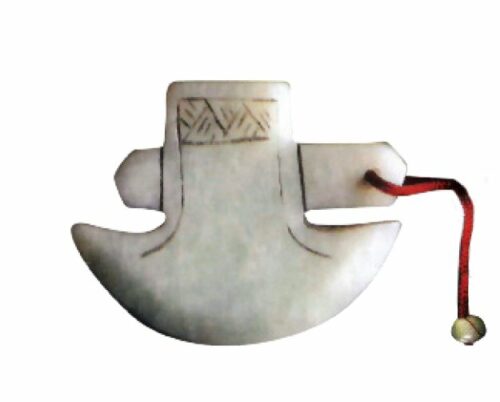 It was and is still a common tradition among Mongolians to embellish a baby’s rug, swaddling clothes and coats with various pendent which are deemed to be propitious for babies. These omens are precious stone, silver, copper-axe, bows and arrows, bells, models of felt-fox, shells, ankle-bones of stags, fangs of boars, and spine of fish, a tamarisk, a red caragana, or a model of a tiger. There is, also, very commonly even today, a piece of silver or a jade axe to embellish baby’s coat. The purpose of this embellishment is to manipulate the angel of death. We also give our children a small axe. This is the symbol of invincibility. It is believed that the axe-shaped pendent can mislead the angel of death and protect the children from the angel of death.

The Pendant of the Wolf’s dib 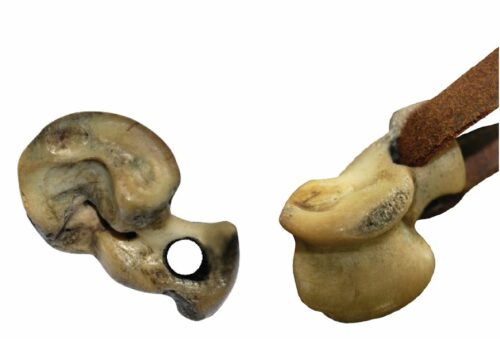 The wolf is our totem. This kind of concept is still alive among the Mongolians. If you encounter a wolf on the way to travel far, to do business or to search animals, we Mongolians believe that our aims can be achieved well. Even if a wolf attacks our domestic animals, we do not think it as a bad omen. It is regarded that the mouth of wolf can bring a good luck. The theft can bring bad luck. That is why individual Mongolians carry a wolf’s dib or fang with him/her. Because there is a folk belief that it might bring a good luck or keep a baby safe. We also adorn the child with a wolf’s dib.

The Pendant of brachiopod’s head

This is a fossil of brachiopod of the ancient epoch. There are many fossils in Mongolia, particularly in Gobi. The fossils look like outstretched winged animals lying down. These lime stones are called by local people as outstretched winged stones. Herders collect lime stone and case it by felt and hang it on a ram’s neck, which is a very ancient custom. As birds never miscarry, it is believed that, by doing so, they can prevent from any miscarry of domestic animals.

So our ancestors’ wish was that their domestic animals never miscarry or slink.

hen an infant wails frequently, it is believed that the infant is frightened from something and if he/she sees the figure of that, the fear will be gone. Then the melted lead is poured into the cold water in a bucket. As a result, the lead hardens in the water and is transformed into a kind of figure. Then this figure is attached to the swaddling-cloth or sleeve of coat.

Pair of the pellets of horse

A person who is collecting cow chips can sometimes find a pair of horse pellets. This person sees this as a sign of good luck on his/her domestic animals and a wish that they might multiply. They may even place it on the upper end of the trellised wall of ger, reciting the spell for multiplication of animals.

It was once popular in Mongolia to make male and female phalli and deem them as a symbol of generative principle. Let’s take an example. There is a valley which is called the Valley of the Womb. There is a phallus sculpture made of granite. The local people call it the penis stone. There is another phallus which is vulva-shaped, shaped, located in the gully opposite to the valley. There was also a phallus carved from the elm trunk in the Shiliin Gol Aimag of Inner Mongolia.