From Duguilan to Political Party

Mongulai
Aug 12, 2019 History of the Mongols, Movement Towards Independence 0 Comment

A duguilan is one of the traditional forms of protest and struggle of the Mongols and was especially widespread during the reign of the Qing Dynasty. The form of struggle was used against the ruling circles of the court; those taking part in would secretly or semi-secretly from a group and discuss problems from all angles, and upon reaching some conclusion, would submit a petition to the highest authority. They would sometimes secretly apply force, attract others and also enter into open confrontation with the administration.

Thirty-five-year-old Dogsomiin Bodoo, a Mongolian language teacher at a Russia school in Consular Hill, an area predominantly settled by Russians, founded a duguilan on almost the same day as the ceremony of the abolition of the autonomy. A subject of the Ih Shav’, Bodoo was an educated man literate in Mongolian, Tibetan, Manchu, and Chinese. After working for some time at the Erdene Shnzav Ministry, Bodoo taught Mongolian in the Russian Consulate’s school of translators. He assisted Tseveen Jamsrano in publishing his journal Shine Toli (New Mirror) and he was also an author, having written a couple of short stories. Bodoo worked in the Russian consulate, where he became acquainted with many Russians. Among them was Kucherenko, a mechanic and typesetter in the Russian-Mongolian printing office and who had previously served in the Tsar’s army. He was a member of the underground revolutionary committee of Russians in Huree headed by a small group of Bolsheviks in the consulate. It was he who introduced Bodoo to Russian Bolshevism.

In November 1919, when the Lower House of the Parliament was dissolved, Soliin Danzan, a low-ranking customs official, founded yet another duguilan in the eastern part of Huree. Danzan, the illegitimate son of a poor central Halh woman, was the same age as Bodoo. Although small in build, Danzan was swift, clever and adroit; at one time he lived like a Robin Hood, stealing cattle from the rich and giving them to the poor.

Dansranbilegiin Dogsom, only one year older than Danzan and an official in the Ministry of the Army, also joined the group. Dogsom was regarded as the best educated of the east Huree group. This group also included future famous singer and composer Dugarjav, the son of the famous Magsarjav Hurts, Galsan, Togtoh, Dash, and a Buriad named Balsanov.

These men, members of the Lower House of Parliament, and low-ranking officials in the state ministries, sent a letter to the Russian Consul-General Orlov on the day autonomy was relinquished. In it, they proposed a united struggle against China. They also elected a representative to meet with the Bogd Khan to hear what he had to say on the matter. The Bogd supported their desire to save the religion and the state but asked them to wait for the right time. Apparently, other groups had formed their own duguilans and had asked the Bogd for guidance in their struggle against China.

The Nature of the Groups

Although these two groups had the same objective, they differed in their ideology, education, and tactics, differences which later caused serious conflict. Bodoo’s group was more educated, ideologized, and more radical. A majority of its members had Russian friends, including Bolshevik supporters and sympathizers, and, given their higher level of education, they were able to assimilate new ideology more quickly. Apart from the Buriads like Danchinov, Jamsrano and Rinchino, Bolsheviks like Kucherenko and Gemberzhevskii converted their inherent patriotism into a concrete ideology.

Naturally, Danzan’s east Huree group was thoroughly patriotic and nationalistic, for many of its members were military officers. They were much more faithful to the Bogd and they were prepared to do anything for the sake of independence. Almost all its members were commoners serving as low-ranking government  officials, and as Choibalsan asserted later when its members were torn apart in disagreement, Danzan and his supporters were a “party of officials.” The East Huree group was always prepared for a decisive move. In January 1920 they were planning to attack Chinese ammunition deport to arm themselves, and in order to expose this treachery, the group members Danzan had even made an attempt to cross the northern border, taking Sukhbaatar along with him, presumably to gather intelligence and seek assistance. 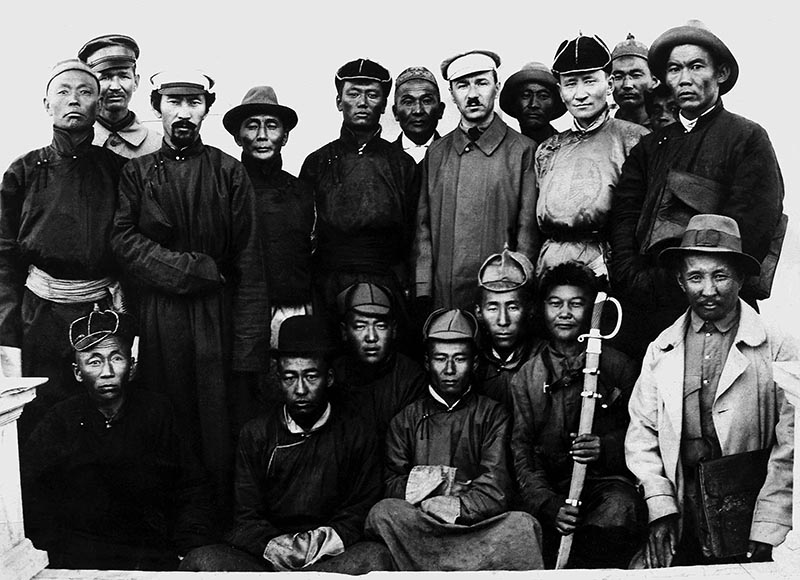 The formation of the Party also marked the end of the era of the nobles and Hutagts, who had rallied around the Bogd. Key leaders like Handdorj, Namnansuren, and Tserenchimid had been assassinated one after another, leaving as a political vacuum; and men like Badamdoij and Tserendoij, who were totally disillusioned, we’re unable to lead successfully. The Bogd Javzandamba Hutagt, who had been the champion of religion and ideology in Mongolia, was so weakened that he would concede to any suggestion made by his subjects. He was prepared even to ally with the devil if only the Chinese were driven out of the country. His nobles were the same. The two revolutionary groups filled the gap left behind by the leaders of the pro-independence movement. In other words, as the nobility lost their initiative and became more and more helpless, they were succeeded by the intellectual members of these two underground groups.

The goals of the Outer Mongolian People’s Party are to liquidate the foreign enemy which is hostile to our religion and race; to restore lost rights and truly revive the state and religion; to improve sincerely the the internal government; to give total attention to the interests of the poor and lowly masses; and to live neither oppressing nor oppressed.

Misrepresentation of the New Generation

With the support of Sorokovikov and the Irkutsk revolutionaries, the Consular Hill group and the East Huree group held a historic meeting at Danzan’s ger on June 25, 1920, o found the Mongolian People’s Party (MPP). The merging of these two duguilans united the middle-class intellectuals of Mongolia with the objective of regaining independence and reviving their religion and statehood; this marked the end of the first stage of the movement to revive Mongolia’s independence and the beginning of its second phase. The constituent meeting adopted the “Party oath”, containing an introduction and nine articles, outlining the objectives of the Party. It is quite evident that the Party’s sole objective was to revive national independence. However, the influence of Bolshevism cannot be denied in such provisions as guarding secrecy and vigilance against unreliable elements. The first document of the Party makes numerous mentions of “reviving autonomy”. This is not a misconception but rather a misrepresentation. This Greek word, which was employed by Korostovets at one time to deceive the Mongols, was still subject to interpretation. Several years before people like Handdorj understood autonomy to mean total independence; likewise,the People’s Party did not comprehend this term as meaning an autonomous province under Chinese suzerainty but as a sovereign independence country.

From this period onwards, a new term, nam, meaning “party”, came into existence. Initially, his term did not mean political party as it is understood now. From this period on a new term, nam, meaning party, came into existence. At that time it meant an underground organization, origination from the phrase “Nam niilj sem huvildana” literally meaning carrying out a conspiracy by uniting secretly.” In order to differentiate the underground organization, they were called the name of the officials, the nobles, and the common people (ard), according to the social background of the members. All the nams, without exception, supported the Bogd, each having the objective of overthrowing Chinese rule and reviving religion and statehood.

In 1920, the members of the people’s Party stated in their letter seeking help from the Soviets:

“We cordially request that all Mongols from Halh and Dorvod provinces which were under the rule of Uliastai, Huree and Hovd during the Qing Dynasty, be once again a self-governing state… to erase the letters which declare Mongolia to be a part of China and to take action to gain independence from China.”

The idea to dismiss Chinese suzerainty and create Mongol autonomy expressed in the letter may seem ridiculous by European standards, but if the term “self-governing state” is replaced by “suzerainty”, their desire to become an independent country can easily be recognized.

In 1920, immediately after the Bolsheviks seized Irkutsk, the Oriental Department of the Siberian Bureau of the Communist (Bolshevik) Party of Russia had been established. The bureau had been operating for several months and had been sufficiently successful at organizing a volution, even in Mongolia, that it was expanded to create the Comintern in the Orient, The Secretiat members included G.Viotinskii, Lepeshinskaya, S.Dalin, and V.Bukatyi. It had four sectors-Japan, Korea, China, and Mongolia-Tibet. The Mongolia-Tibet sector’s staff included G.Danchinov, M.Sakhyanova, F.Konyaev, Natsov, Ishidorjin, S.Borisov, V.Yudin and Starkov. These are the real “fathers” of the People’s Revolution in Mongolia.

The relationship between Gamberzhevskii, Kucherenko and Maslakov and the Consular Hill group members, with whom they always met. was more of a personal nature. In the early part of 1920, the Bolshevik Naum Burtman, while passing through Huree on his way from Beijing to Irkutsk reportedly met with the Consular Hill group members, giving them advice as suggested by Gemberzhevskii, Kucherenko, and Maskalov.

Danzan and several other members invited by Bodoo met with Sorokovikov at Kucherenko’s home in March 1920. It appears that these Russians told the Mongols that if they were planning to stage a major revolution they must, first of all, organize an underground Party with its own rules and develop a plan outlining the future course of development.

Sorokovikov returned to Huree and met with about ten men from the two groups on June 20, 1920, relaying to them the fact that the Soviet government welcomed their struggle for the national liberation of the Mongolian people.