How to Greet in Mongolian Language

The customs Mongols have for greeting and showing respect toward others is traditionally quite rich. When guests arrive at someone’s ger they say nokhoi khori (hold the dog) before getting off the horse. Thereafter, when someone comes out and holds the dog, the guest takes his khet khutga (knife) from his belt and gets off the horse. After tying his horse to the hitching post, the guest enters the ger. If there are two or more people in the ger, the guest greets them saying sain baitsgaana uu? meaning “Are you all well?”; or if there is only one person in the ger, he greets this person by saying Sain baina uu ta?, meaning “Are you well?” The act of taking the knife from the belt expresses that the guest has no thoughts of harming the family.

The head of the family invites the guest to take a seat. According to the seasonal characteristics, the guest greets them by asking the family if they are getting through (or passing) the summer (winter, spring, autumn) well. Then the family replies that they are getting through the season very well and asks the guest the same question. The family asks the guest, “From where are you coming,” “Where are you heading to,” and “What is the purpose of your journey,” all while offering tea and food as a sign of respect. 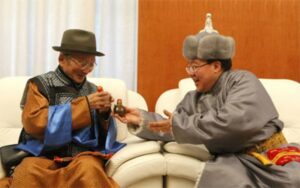 If the guest comes when the new tea or meal is being prepared, it is believed that his journey will continue very well. Consequently, the guest speaks about the place where he is coming from and going to and the purpose of his or her journey. Following the exchanging of their names, they exchange snuff bottles and tobacco pipes with each other, while the conversation about current conditions in the pasture, such as the health of the livestock, its fertility, how well or bad this year’s grass has grown, and how the weather has been. If the visitor is coming from far away, the family lets him stay and rest overnight.

If the guest is someone with whom the family is previously familiar, the conversation takes place about news related to their job or events taking place with their family. It is a custom that the younger person greets the oldest person first. If two people come across to each other in a pasture or on a road, the two greet and pass on their right sides. If not in a hurry, they get off of the horse and greet each other while sitting and exchanging their snuff bottles or tobacco pipes. Consequently, they go on their ways to having a friendly conversation. During the rituals of felt making, fleece beating, foal branding and other customary events, people mutually share with each other well-wishing poems and benedictions as respect.