Xiongnu Chanyu. After the death of Wuyanjiudi Chanyu in 60 BCE, an internal disorder rose up in Xiongnu, and five Chanyus reigned at the same time. In history, this period was named “The troubles of five Chanyu”. Then it ended with a quarrel between brothers Huhanye and Zhizhi for the throne. In 54 BCE, Zhizhi captured the steppe under his control, and Huhanye was forced to shift the Han Dynasty.

In a hostile way towards each other, Xiongnu was separated into two parts and the brothers did not agree with each other. So the Xiongnu Empire was getting weaker. There was a group who thought that one of the brothers would rule the Empire and dominate others again. On the contrary, most of the lords and officials thought that Xiongnu could not be re-established in this situation that the Han Dynasty had already gotten more powerful. So Xiongnu should join the Han Dynasty for a while for reinforcement. Drawing on these proposals, Huhanye Chanyu decided to receive the second proposal to submit to the Han Dynasty and reinforce his nation.

In 53 BCE, Huhanye Chanyu sent his son to the Han Dynasty as a hostage. In the following year, Huhanye Chanyu left for Chang’an, the capital city of Han, and personally called upon Xuandi Emperor of Western Han. Xuandi Emperor met him friendly and formally. He told him to accept his proposal to become a vassal of the Han Dynasty and granted him a new golden seal with the writing “Xiongnu Chanyu Seal” tied with a yellow silk string. Due to the meaning of the writing on the seal, the Chanyu received the seal. Because Xiongnu rule and the power of Chanyu were still in the seal as content and the word “Seal” in the writing was not turned into “Sign” which was always used by the local governors of the Han Dynasty. even though Xiongnu was weakened caused of the State disintegration and joined Han Dynasty, its power state rule and aspiration were still as before in people’s minds. So the Han Dynasty was aware not to make or declare them a vassal of the Han directly. The Emperor of Han sent some officials to make a greeting to Xiongnu Chanyu respectfully at a distance from his palace when he came to the Han Dynasty at first. And when he visited the palace, he was offered a higher seat than ministers, dignitaries, lords, and military commanders, and the state seal, hat, belt, outer or underclothes, a sword with a precious set, knife, bow and arrow, cart, 15 horses, 20 jing (a jing is 596.8 gram) of gold, 200.000 copper coins, 8.000 pieces of silk goods, and 6.000 jing of cotton as gifts. Huhanye Chanyu went back from the palace of the Han Emperor after his visit lasted a month, he was guarded by 20.000 Chinese cavalries. 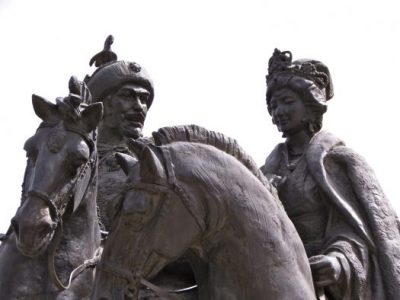 According to the Emperor’s decree and Huhanye Chanyu’s request, he was settled down in a place named Shouxioncheng in the north of Ordos, that is to say, near the fortification line built by Han, in the south of Xiongnu land. Han Emperor sent a large amount of millet and rice to the people who accompanied Huhanye Chanyu and decided to supply them every year.

At that time most of the Xiongnu were under Zhizhi’s rule, but he moved from the Khangai Mountain and Orkhon Valley into the Semirechiye region, to avoid the sudden attack from Huhanye Chanyu who was supported by the Han. Some Chinese envoys who visited the Zhizhi Chanyu palace died for an unknown reason in 48 BCE, and the Chinese side thought that Zhizhi killed the messengers, bore a grudge, and dealt with Zhizhi Chanyu with an antagonistic view. After this event, Zhizhi Chanyu was not able to move back to their homeland. On the other hand, Huhanye Chanyu was no longer worried about any attack on Zhizhi Chanyu. As a result, some Xiongnu officials and ministers submitted the Chanyu to move back to the homeland. Then they came back to Eastern Mongolia again in 47 BCE. Huhanye Chanyu was settled down in the Bogd Khan Mountain or the Bayan-Ulaan Mountain or between them because they were all not close to the domain of ZHizhi Chanyu and the Eastern Tuqi Wang domain was Huhanye Chanyu’s birthplace. Although formally Xiongnu was protected by China, the homeland in Mongolia was ruled by Huhanye. But Zhizhi Chanyu controlled the western countries such as Semirechiye, Dingling, Wusun, Kangjiu, and so on. Some tribes like Wuhuan which was dominated before still gave duties and taxes to Huhanye Chanyu with fur and cloth.

In 37 BCE, Zhizhi Chanyu was beaten and killed by the Han Dynasty in his newly built city, in the Talas River, the Semirechiye. It gave Huhanye Chanyu a chance to be the only influential leader in the homeland. In 33 BCE, he invited one again to Chang’an city, called upon the Emperor of the Han Dynasty, and received a duty to protect the northern border of the Han from other nomads. During this time, he proposed to ask a princess of the Han Dynasty to improve the relationship. The Emperor received his proposal and gave him one of his concubines named Wang Zhaojun as a Yanji (queen in Xiongnu). She gave birth to a son named Yitujiyashi to Huhanye who would become later the West Zhijo wang of Xiongnu.

In 31 BCE, Huhanye Chanyu died and his son was raised a Chanyu with the title Fujulei-Jodi. He married Wang Zhaojin according to the levirate tradition and had two daughters. Apparently, Wang Zhaojun died before Fujulei-Jodi and now there is a big earth tomb that is known as one for Wang Zhaojun, near Huhhot, Inner Mongolia was built. Actually, the Palace of Huhanye Chanyu was in the east of Mongolia especially in the zone of the Noyon Uul, near the Kharaa river. During the time of Huhanye Chanyu, Xiongnu Empire was recognized as a vassal of the Han Dynasty, but Xiongnu still kept its indecency indeed. To some researchers’ view, at that time, the Xiongnu Empire was re-established and dominated all the land as before.