Mongolians hunt for stronger and bigger herding animals in hunting teams, but for smaller animals such as sable, marmot and squirrel hunt alone. Mongolia is a country that consists of the wide-open steppe lands, forests, rivers, mountains and deserts, and each has its own types of animal species. Therefore, from ancient times Mongolians have traditionally created many ways and forms of hunting. According to the wild animal types it is divided into bird hunting, hunting and fishing. Hunting is Mongolia is very common. 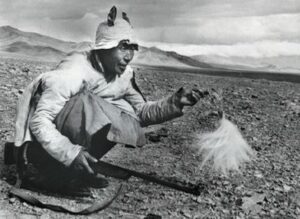 Hunting for smaller animals has its own distinctive names, as does fishing, bird hunting and marmot-hunting.There are special customs and manners used during hunting. For instance, the appointed date for hunting is kept secret. It is only shared among partners through the giving or exchanging of horse manure as an agreement and arrangement of the hunting date. The partners should be friendly having no arguments with each other and should not say anything bad about the animals they mean to hunting in Mongolia. If there are no animals around, this should not be said out loud. Instead it is said, “There are few animals around,” “Maybe some around,” or “Animals haven’t come around a while.” If the hunt is taking place in the Khalkh or central Mongolian region, some animals are given substitute names, such as önöökh jiikhgar (that squinted) for the wolf, tüdger (stumpy) for the wild boar, “flat horned” for an elk, “hat” for a fox, and turag (matured) for a deer. 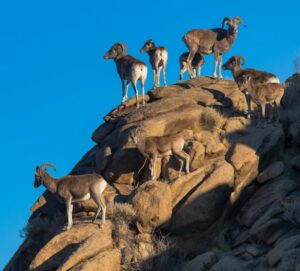 During the team hunting, the hunters gather to worship spirits and to give offerings to them for the hunt. Those hunting alone, in contrast, offer pieces of food or dairy products to the mountains and rivers of the area asking for their blessings. When Buddha’s teachings flourished in Mongolia, the words related to the practice of hunting changed to religious meanings. On the eve of the hunt, the hunters of the Uriankhai ethnic groups in western Mongolia invite an epic minstrel to perform Altain magtaal or “Ode to the Altai.” Some experienced hunters take the epic minstrel with them to the hunting grounds. If having no quarry, the minstrel performs in the midst of the hunt or when the hunters return from the hunt. This is due to the belief that if Altain magtaal is performed and the animals and plants of the Altai are praised, the spirits of that mountains and rivers are pleased and offer the quarries for the hunt. It is for this reason that the quarries of the hunt are called Khangain khishig or “the bounty of the Earth” among Mongolians. 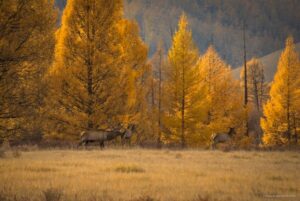 There is a tradition that during the night camp of the hunt among the Buriats, interesting tales are told for the spirits of the taiga. In some cases the special storyteller goes with the hunters. Usually only experienced hunters and elders tell the tales. After telling the stories, older hunter 224 Mongolia is a country that consists of the wide-open steppe lands, forests, rivers, mountains and deserts, and each has its own types of animal species. Afterwards, everybody says ‘khurai, khurai, khurai’ for the bounty from the hunt. The Darkhad hunters believe that going out for the hunt at dawn will bring plenty of quarries. In the morning the hunter worships the hearth and house spirit and sanctifies the gun with burning incense. After having eaten enough, the hunter saddles his horse and loads the second horse. The hunter starts from the north side of the ger, then goes around the ger three times in a clockwise direction, and then goes in the direction of the hunting. At the first stop, the hunter gives a benediction:

Let the quarries be plenty as we go in

Let the saddle-bags be full as we come back

Let me be not be dismembered as I fall

Let me be with no overflow as I drink

Let me have plenty of quarries

As he says this, the hunter sprinkles tea three times in four directions. After having tea and extinguishing the fire, the hunters circumambulate the fire-bed three times and ride on.If they come across a beast other than the one they intended to hunt, it is avoided. In some cases, beasts encountered are considered to be bad luck for the hunt. For instance, if a hunter encounters a wolf, it is considered to be a good omen. If a hunter encounters a fox, it is considered a bad omen. So it is necessary to kill the fox. If a hunter cannot kill the encountered fox, some hunters return from hunting. If a hunter finds a trail of the wolverine, he spits on it. If a hunter encounters the wolverine directly, he must to kill it. So he says, “The aimed gun never misses, devilish wolverine is not able to piss,” and shoots it. This is a custom. 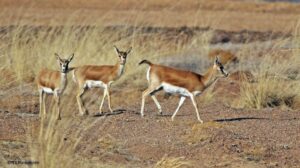 It is an honour for the Mongolian hunter to hunt for red stag, bear, or elk. In that case there is a ceremony among Mongolian hunters. There is a kind of link between the red stag, bear, and elk with shamanist totems. There are two words Börte-chino (miniver wolf) and Qua-maral (fair-doe) in the Secret History of the Mongols. The scholars have come to the conclusion that they are totems. Therefore, Mongolians avoid killing deer without purpose. Some tales call the person who kills a deer as a sinful killer. Two tales, Ulir tsagaan övgön (Hackneyed white old man) and Khorin dörvön salaa evertei ukhaa dönön buga (Twenty-four antlered stags) describe hunters who killed a deer as feeling sorrow for killing such a beautiful animal and making her fawns into orphans. These tales attest to the fact that Mongolians worshipped deer from ancient times and aspired to preserve them.

If it is unavoidable to kill a deer, we perform a special ceremony. The deer usually dies placing its chin to the ground and raising its antler upright. If the hunted deer dies placing its antler to the ground, it is a bad omen for the hunter. The head of the quarry is cut off before flaying its hide and placed on a white sheet without its antler touching the earth. The antler is carried by one person when the hunter returns home and places it on the roof of his ger. All the hunters are treated with tea.

There are special words to say when we kill a bear. The meaning of these words is neither to look down at this beast nor shoot it as enjoyment. These words mean to convey that “It was because of necessity that we shot you.” For instance, as soon as the bear is shot, the hunter should run up to the quarry and say, “Oh my, I shot you without intention. The swerved bullet shot you. Please excuse me!” When we flay its skin, we say, “The coldness comes, my body is chilled. Warm me up.” There are certain substitutions for real intention in some spells.

It is taboo to hit a rock with the stomach of the quarry. When we cook game, if its water decreases, we do not add any water to it. At first we drop a bit of soup into the water that will be added. Hunters do not cut off a piece of meat from the quarry in the saddle-bag. It is taboo to cut off saddle-bags and to take game. There is no tradition to distribute raw meat of a hunter’s quarry. There is a view that if you break a tradition, the hunter’s next hunting trip can fail. It seems like superstition, but this is intended to save the bounty of nature and to live economically.

At the end of the hunt as a team, a special practice for dividing the meat is carried out among the hunters. Individual hunters can give a share of the meat to their neighbours. If during the hunt an animal is killed, the head and its skin are given to the shooter, as a way of acknowledging the shooter’s skill.