Mongulai
May 1, 2019 History of the Mongols, The Manchu Tide 9 Comments

In the 17th century, as the Mongol Empire disgusted, the person of the all-Mongol throne was Ligden Khan who, so far, had gained nothing except that seat. The unruly princedoms dissented as ever, with some of them recognizing his khanate as a mere formality, others ignoring him and still, others were hostile. Being the head of the Tsahar branch, he was also known as Ligden of the Tsahar and actually was no more than a tribal chief yet he assumed from himself the name of “Genghis, the chief of the forty tumen of Mongolia”. True to the long-standing Mongolian tradition, Ligden periodically raided and looted China.

Ligden Instead of the Chinese

The Chinese, who had noticed the growing Manchu power in the north, offered Ligden Khan goods “for free,” and proposed that he guard their northern frontiers. Thus the Manchu, who were planning to expand southward, found in their way Ligden Khan, who was now being paid thirteen thousand lan (a unit of weight measuring 37.2 grams, somewhat over an ounce) of silver from the Chinese coffers per year.

Once, when the Ming Emperor failed to hand out his”salary,” Ligden Khan became very offended and threatened Datong. Wishing to keep peace with the Mongol Khans, the Chinese quickly raised his pay to 81,000 lan.

It became clear to the Manchu that without defeating Ligden Khan and subjugating eastern Mongolia, they would not reach China. Abahai Khan of the Manchu launched a massive attack had dealt a crushing blow to the Tsahar. Ligden Khan, together with his hundred thousand people fled in the direction of Hoh Nuur. Losing about four-fifths of his subjects during the journey, managed to reach Hoh Nuur only to die there of smallpox. Thus the great khans of the Genghisid Mongols came to an end with Ligden. 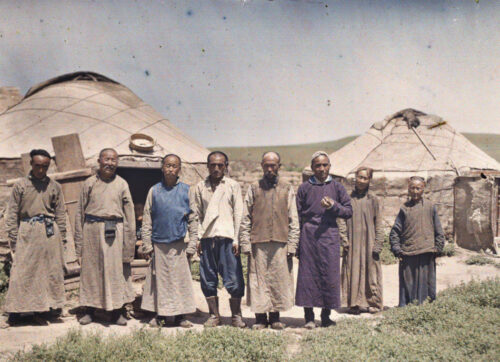 Eastern Mongolia which directly bordered the Manchu started joining the latter long before Ligden Khan’s reign. After Ligden Khan’s death, one group of east Mongolia after another recognized the supreme power of the Manchu. What happened next was the enthronement of the Manchu Abahai Khan, son of Nurhaci, by the princes of the sixteen clans of eastern Mongolia at their convention in 1636. Abahai now possessed Kublai Khan’s Yuan Dynasty Erdene Tamga (imperial jade seal), which confirmed his status as a ruler in East Asia. The same year Abahai recalled to life Jin, or the Golden Empire of the Jurchid, by proclaiming his own Qing Dynasty.

New terms were coined to define the south Mongolian territory inside the borders of the Qing Empire. It was known as Ovor Mongol ( Inner Mongolia).

At this time the terms Gadaad (meaning outside, foreign) Mongol and Ar (northern) Mongol also came into being. Translated into different languages, these terms, together with their Chinese equivalents Neimenggu (Inner Mongolia) and Waimenggu (Outer Mongolia), became during the twentieth century the established language of historiography, particularly Mongolia, China, Russia, and Japan.

Now that the Manchu were in control of China, they adopted a Chinese way of dealing with Mongols: giving them presents, bribes, and payments.

Bribes and other gifts appeased them for a while, but also sowed discord among them. Along with commodities and princesses, Chinese presents for nomadic chieftains also included titles and ranks. The Manchu Khan was very generous towards his Mongol vassal princes. On this occasion, the khan traveled a distance of some ten settlements to meet his guests in person. After incorporating the groups of Inner Mongolia, the Manchu left to the Mongol princes their lands, pastures, and subjects, and demanded that they strictly abide by Manchu laws, send all their troops to fight in Manchu wars, and provide funds and livestock. In return for their zeal, Mongol princes, who needed new titles, were awarded titles of van, beil, beis and gun, as well as regular payments of silver and silk. This arrangement lasted for more than two hundred years.