Mongol khoomei is an outstanding heritage representing the nomadic Mongolians’ contribution to the cultural heritage of humanity. Created, maintained and inherited by the Mongolian people from generation to generation, khoomei is a type of ancient vocal art that emphasizes the essential the cultural identity of the Mongols. Khoomei is a unique and exceptional art form in which singers create several sounds at once using their vocal apparatus. The singer articulates harmonics that sound above a fundamental tone, which is in the depth of khöömei. Khoomei literally means “pharynx”, referring to the main body part used to produce this vocal technique. The harmonics originate from the fundamental tone by contracting the pharynx and diaphragm. When performing khoomėi, the performer sends air through the chest cavity, pharynx, larynx, his mouth, the nasal cavity to create a sound and melody. Khöömei is a khün khögjim or “human-music,” which uses the human vocal organ as a musical instrument.

The Mongolians developed the khöömei art as a unique vocal art. Among the nomadic people in Central Asia, Mongolians have been living in close interaction and harmony with nature. Mongolians created khöömei in reciprocal correlation with nature and their land. Ethnomusicologists studying khöömei mark it as an integral part of ancient nomadic pastoralism, which is still practiced today. The basis of khöömei is an imitation of the sounds of nature, mountains, water, wind and animals Researchers suppose that khöömei could have been developed also in connection with argil (a throat timbre), which is an epic-telling vocal technique; it is also used in the sound of the wooden tsuur (vertical flute). The sound of the tsuur is based on the sounding of a fundamental tone which sounds very close to khöömei. According to ethnomusicologist Johanni Curtet, we can classify khöömei’s vocalization into two styles:

Kharkhiraa khöömei: The singer inhales deeply and applies breath pressure to his pharynx and abdomen, producing a deep a harmonic sound that vibrates one octave lower than the fundamental note produced. What you hear is a very low-pitched sound. The singer actually vibrates not only his vocal cords but also his ventricular folds. It is this deep harmonic sound that is heard in the foreground and that characterizes the kharkhiraa style, although in some variants a melody of high-pitched harmonics can be heard above the fundamental sound. 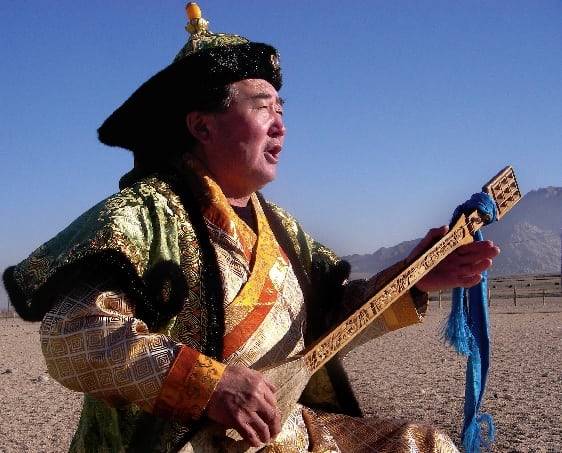 Isgeree khoomei: (also called as nariin khoomei, uyangiin khöömei, or altain shingen khöömei): The singer inhales deeply and applies breath pressure to his pharynx and abdomen, producing a harmonic sound that vibrates several octaves above the fundamental tone. A melody using the pitches of the harmonics, sounding like a high-pitched whistle, can then be heard.

In both cases, the harmonic melody is sung in the same fashion. The singer changes the pitches by altering the size and shape of his mouth cavity by opening and closing his lips or by moving his tongue backward, sticking its tip on his palate, or else by moving the central part of his tongue from
front to back, and its tip against his bottom teeth. To this are added techniques aiming to enrich the tone color and to add melodic ornaments. Moreover, all these techniques can also be combined. The more than 20 techniques of khöömei include the Bagalzuuriin khöömei (throat khöömei), Tsuuraa khöömei (echo khöömei), Hamryn khöömei (nasal khöömei), and Dangildakh khöömei (syllabi khöömei). The singėrs use the Shakhaa vocal emission to sing the magtaal (praise song), in which the basic tone is close to khöömei.