Xiongnu second Great Chanyu. This is the title granted to Xiongnu Chanyu whose real name was Jizhu. His official title was “Xiongnu Chanyu, the supreme leader, blessed by the Sun and Moon, and conferred by the Sky and Earth”. He was the son of Modun Chanyu and his successor. During his reign, Xiongnu became a dominant power in East Asia and expanded Xiongnu territory to the west and southwest. Yuezhi was driven out of the Altai Mountain. He took control of the Northern part of Xinjiang and Gansu. Xiongnu took control of the Northern branch of the Silk Road.

Tribal confederation of Xianbei. It means Xianbei of the West part of the Liao River. After the collapse of the Xianbei Confederation, it was split into West Xianbei and east Xianbei. East Xianbei consisted of Murun and Duan tribes, West Xianbei consisted of Yuwen, Chifa, tufa, Touba-Tabgach, and Kumosi tribes. Khitan people also were included in Kumosi tribe. history of Khitan after this period was divided into 3 stages. 1st, Khitans of Eight tribes (386-618), a second, period of Dahe tribe (618-730), 3rd, a period of the Confederacy of Yaonian tribe (730-907).

Li Guang (died in 119 BCE). military general of the West Han dynasty. His nickname was “Flying General”. His light cavalry had made a sudden rapid attack on the center of Xiongnu. thus, he was named “Flying General”. First, he emerged through his efforts into putting down the internal riots. However, he also got a bad reputation for a series of failures he had in the following events and was named “unfortunate”. Several failures and unlucky events such as getting lost and being surrounded by enemies during the fight were written in his biography of a military general. That his soldiers were badly disciplined, he was bad at planning and adopting strategically military policy were the reasons for it.

During the Yanmen battle, his army was defeated in 129 BCE, he fled barely, lost his title, and became an ordinary citizen. In 120 BCE, he was also surrounded and defeated by Xiongnu. He committed suicide due to the fact that he was going to be charged with the fact that he was blamed for that he was late for an appointment during the fight with Xiongnu in the west of Gobi and let Ichixie Chanyu flee.

Li Lin (died in 74 BCE). Famous general and statesman of West Han and Xiongnu Empire. He is the grandson of Li Guan, “Flying General”. Han Wudi emperor promoted him to high ranking military position considering his good origin and his talent for hunting and shooting even though he was young. Li Lin served for the border defense and was sent to the inland (towards the interior) as a secret agent. Although he did not succeed much he was promoted to the position of cavalry general. after several years, he began to participate in the campaigns accompanying great generals such as Li Guanli. In 99 BCE, general Li Guanli led 30.000 armies to attack Xiongnu from the west. Li Lin was responsible for the backside and supply. However, he was not content with his responsibility. He asked for 5.000 cavalries to fulfill his plan to make a sudden attack on the palace of Chanyu and destroy him. When he introduced his plan to the Han Wudi emperor, he granted permission. The army led by Li Lin advanced to the North for one month, and near Altai mountains have been surrounded and crushed by the Xiongnu army. Only 400 cavalries could go home from his army. Li Lin surrendered to Xiongnu.

After he arrived in Xiongnu, he was granted the title, Yuxiao Wang. It was a high rank equal to the chief counselor of Chanyu. however, the mother queen of Chanyu did not like Li lin. Thus, he was sent to the North and was not called back until she died.

In 90 BCE Han army attacked Xiongnu by 3 routes. When the general Shang Quichen arrived in the Altai mountain with his 30.000 cavalries, Li Lin opposed him with 30.000 cavalries of Xiongnu. He was defeated and withdrew back. He also failed to turn out Han envoys Su Wu to Xiongnu. He lived in Xiongnu for more than 20 years and died of illness in 74 BCE. There is a hypothesis that the remains of the Chinese-style building found around the capital city Abakan of the Khakas Republic, the Russian Federation might be Li Lin’s palace. however, this issue has still been controversial. 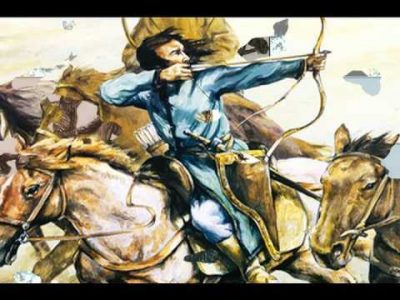 Chinese historian, Xiongnu scholar. Was born in Guandong province in 1916. Professor of the Department of Mongolian history of the Inner Mongolian University, Chairman of Mongolian studies society of the People’s Republic of China, Counselor of historical studies of the Nation, Honored doctor of the Institute of Social Science of Inner Mongolia. He wrote 12 monographs, and 50 academic articles. his monographs based on the ancient records and archaeological studies such as ‘General history of Xiongnu” (Beijing 1986), “History of Turkic people” (Huhhot, 1988), “History of Donghu” (Huhhot, 1989) have been considered important works on nomadic studies published in China. In addition to them, he also published works such as “Narrative of Xiongnu history” (Beijing, 1982), “Collection of historical sources of Xiongnu” Volume 1, 2 (Beijing, 1988), and “Collection of scientific articles of Xiongnu history. 1919-1979”, (Beijing, 1983).

Influent chef of South Xiongnu. Son of Yufuluo Chanyu and father of Liu Yuan, the founder of Xiongnu Han-Zhao State. When Huchuxian Chanyu came to the throne, he appointed him as the Left Tuqi Wang. He exercised direct authority over 5 tribes of South Xiongnu.

In the 21st year of Huchuxian, Cao Cao captured him, took him hostage, and promoted him to the position of Chanyu. There is some evidence that he participated very actively in the political life of Northern China. It is unknown when died. Though he was conferred as the real Chanyu of South Xiongnu. When he changed his clan name to a Chinese-style one-syllable clan name, he considered the fact that ancient Chanyu had relations with Emperors with the clan name Liu of the Han Dynasty by marriage and adopted the clan name Liu.