The Qing Dynasty had its envoys stationed in four places in Mongolia. The (Manchu governor) in Huree was responsible for Tsetsen Khan and Tusheet Khan aimags, while the amban in Uliastai oversaw matters in Sain Noyon Khan and Zasagt Khan aimags. These four aimags were called the Halh Four. The amban in Hovd was responsible for the Hovd and Urianhai borderlands. A border representative was also posted in Kyakhta. Administratively, Dariganga was a part of Kalgan. These territories together formed Outer Mongolia. After Huree’s amban Sanduo was driven out, the representatives in Hiagt and Uliastai also left for home.

The Hovd amban, who had strong fortification and well-armed troops, not only refused to be subdued, but executed the state envoy. This gave rise to the need to liberate Hovd.

Jalhanz Hutagt Damdinbazar, one of the influential Halh Hutagts, was appointed by the Bogd Khan as the Minister of the Western Region and was instructed to pacify the territory. Prince Haisan was appointed his vice-minister. Before long, the hutagt-minister had gathered seven hundred soldiers. The Bogd also instructed Prince Magsarjav and Damdinsuren, who had just returned from Barga, to liberate Hovd. They left huree with only twenty-five soldiers as they planned to mobilize more soldiers as they planned to mobilize on the route and in Hovd. On their way, they mobilized three thousand soldiers and, upon arriving in Hovd, joined forces with Ja Lama Dambijantsan and his two thousand additional troops. This was an enormous army for the Mongol’s, who had not gathered an army in almost 200 years and had almost forgotten how to fight in battles.

Magsarjav and Damdinsuren from Huree, with the help of the Ja Lama who mobilized western Mongolia and Urianhai, were able to liberate Hovd from the Qing Dynasty. The combined forces attacked the Hovd fortification-the last stronghold of the Manchu Qing Dynasty in Mongolia.

First, the Mongol soldiers besieged the fort and demanded its surrender. The fifteen hundred soldiers inside refused. The Fort remained under siege for ten days, after which a two-day battle ensued culminating in its fall on August 7, 1912. In Hovd, the Mongols captured more than one thousand camels, over one thousand sheep, two hundred horses, five thousand sheep, two hundred guns, twenty thousand rounds of ammunition, and twenty thousand taels of silver.

Both sides suffered hundreds of casualties. Consul-General Kuzminskii tried to mediate between the two parties to prevent bloodshed, an act for which he was later rewarded by the Bogd.

Mongolia had been under Qing rule for 220 years, but with the liberation of Hovd, was now fully free from the alien yoke. The liberation of Hovd was a much more significant even than the declaration of independence in Huree had been. Between Sun Yat-Sen’s revolution of October 1911 and the official fall of the Qing Dynasty in February 1912, the Mongols seized the initiative. Under the leadership of the Javzandamba Hutagt and the Halh princes, they enlisted Russian support and proclaimed their independence. 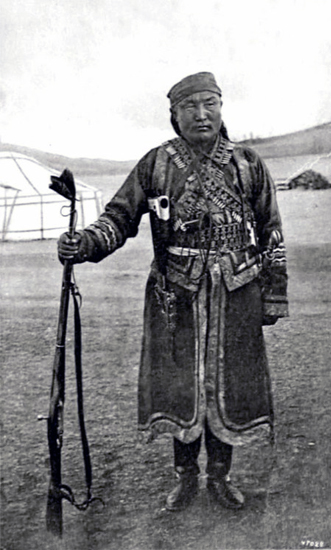 During this time, the main in charge of western Mongolia was Dambiijantsan, known throughout the country as Ja Lama. Ja Lama was a Russian Kalmyk born in Aidarkhan in 1860. After arriving in western Mongolia with his two camels, he soon became the most influential man in the region.

Ja Lama lived along the border with Xinjiang, borders, near the Shar temple. The area had no Chinese but was inhabited by Oird, Uyghur, Dungaan, Urianhai, and Kazaks. Ja Lama represented the communication between western Mongolians and Urianhais. The increasing number of Russians settling in Urianhai bred resentment amongst the nationalistic Urianhais and they joined Ja Lama’s army.

During his brief rule in western Mongolia, from the time of the victory in Hovd in August 1912 until his arrest by the Russians in February 1914, Ja Lama Dambiijantsan strove to change the social structure in Mongolia.

He was a revolutionary who honored tradition. He successfully merged Mongolian and Russian cultures and integrated ancient superstition and barbarism with the changes in the culture. He announced that he would follow the examples of the Russian Tsar Peter; he founded his own capital and introduced a stringent legal code. He was strict, pitiless and ruthless, and at times, extremely cruel. He put strange demand on the lamas and monasteries. He attached great importance to cleanliness and accuracy, and he urged his nobles to wear Russian clothes and boots. At times he even demanded that they wear colorful Russian uniforms. He hated when lamas smoked or drank, and went as far as to punish them harshly in public. he beat to death anybody who dared disobey his orders and instructions. At times, he extremely savage and brutal, gouging out the eyes of men when they were still alive. He appeared to be insane yet at the same time a genius: it is no wonder that the Mongols believed the Ja Lama to be the reincarnation of Amarsanaa (the last Dzungar Khanate leader). The Mongols believed him to be a holy, bullet-proof person with supernatural powers and therefore feared him greatly.

he favored the Kalmyk when the idea of Pan-Mongolia began to spread at the beginning of the 20th century. Kalmyk relations with Mongolia started with him. However, he opposed the Halh intention to unite western Mongolia and demanded autonomous rights be granted to Hovd aimag. It is clear that Ja Lama did not see the importance nor the future effect of establishing a united Mongolia.