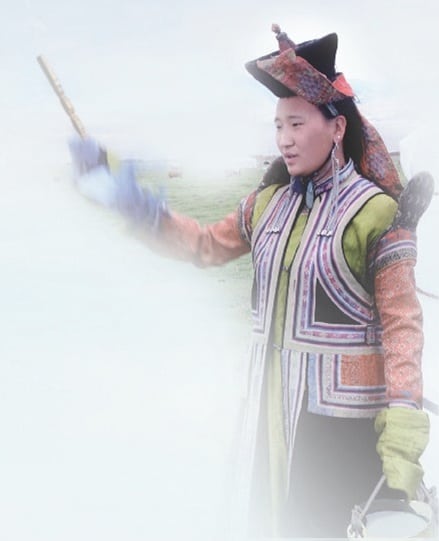 Mongolians undertake milk libation ceremonies to honor the heaven, earth, and mountains when spring arrives, the weather turns warm, and the snow and ice melt. This is also the period when young animals are born and milk products become available. Milk libation symbolizes the arrival of these young animals and the dairy products. It venerates heaven and nature and asks for the endowment of nature. It is a custom unique to the nomadic peoples.

This symbolization concerns each of the five kinds of animals. Ceremonial actions and poems vary according to the beginning of birthing and milking period of each of these animals.

In order to perform this ceremony, powdered juniper needles are burned at home as an offering. The juniper needles are mixed with Artemia and a rendered cream that includes the best ingredients. They are then burned on the northern side, or on all four sides, of the night corral of the flock of sheep.Generally, Mongolians burn juniper needles or incense when they perform special ceremonies. Doing so suggests that this burning has a magic power to sanctify. This act is linked to the worshiping of fire, which has been practiced by Mongolians since ancient times.Using a cypress-wood pail, we milk the mother animal that brought forth the first young of the season. 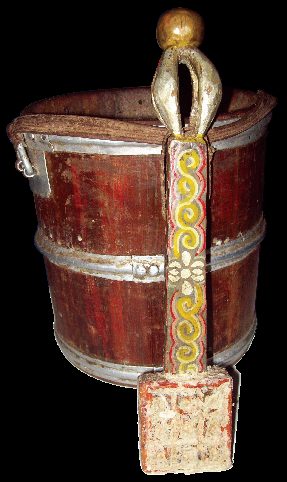 Generally, two females with compatible year signs perform this libation ritual. One of them holds the pail with milk in her left hand while the other one dips the libation ladle into the pail with her right hand and then makes milk-libation movements to the ninety-nine heavens, the seventy-seven masters of dairy products, and the surrounding mountains. They go round the gers and night corrals of the flocks in a clockwise direction.

Special verses are recited during the event that asks the heaven, mountains, and rivers for their love and blessings. For instance, two verses of this ceremony state, “May there be no a sudden incident, death, natural disaster or livestock robbery; May there be plenty of pasture and water…” After performing the milk libation ceremony, everybody enters the ger to celebrate by consuming the ceremonial food and drink. It is a common custom among Mongolians to do a milk-libation ceremony every morning and evening.

The custom of milk libation has prospered and been maintained in Mongolia first under the dominance of shamanism and then later under Buddhism. Some words related to shamanism and also Buddhism in the libation poems can still be heard.

There are also blessing rituals for the tethering of newly weaned baby lambs or kids. These and the milk libation ceremonies are performed by reciting the endowment verses and ritual praises for the increase of the animal population.