From a very young age, Mongolian children in nomadic societies grow up involved in the everyday herding activities of their families, such as stopping lambs and calves from going to pasture, keeping lambs away from their mothers during milking, and learning the practice of herding animals based on actual practice. Before riding horses, Mongolian children ride sticks, making them simulate the bucking, shying, and galloping of actual horses. Such play is psychological preparation to ride a horse. They make horse-lassoing stings from bulrushes and simulate catching horses. This is their play. When they turn five years old, they start riding a horse. Then they ride a swift horse in the Naadam races. They then learn to catch horses with stings and lassoes, after which they begin breaking untamed horses. Thus, from an early age, they become good at working with horses. As they grow older, they let their horses buck and learn to seize objects from the ground while their horses are galloping at full speed. These activities can turn into rodeos which test the astuteness, prowess, horsemanship, and vigor of our youth. 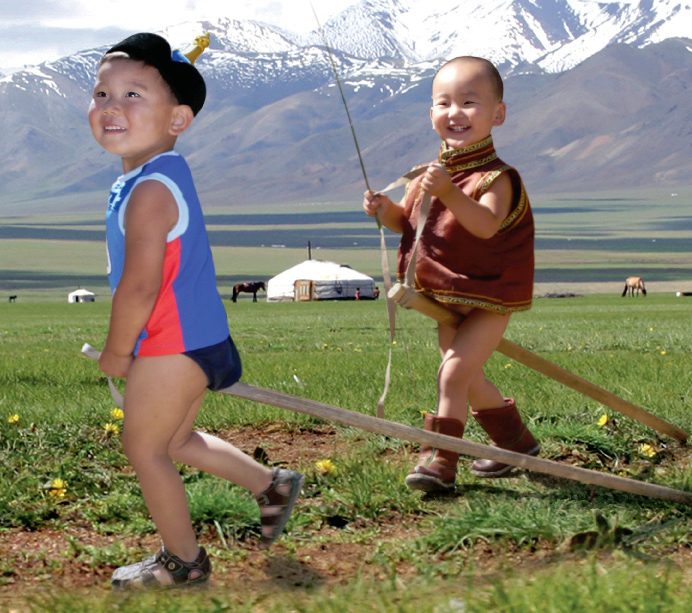 Throwing a Piece of Whitewood

Adults mostly play this game. The game “Throwing a piece of white wood” is played in the twilight and in the moonlight after finishing the day’s work and setting the animals to their lairage. This game is played after the shearing of the sheep and after the beating, the fleece and the making of the felt by groups of people who live in the vicinity of each other. The piece of white wood is called the “tsüü”. One person holds this piece of wood, stands apart from the others, and loudly calls out, “Shall I throw a piece of white wood?” This person then throws the wood as far as possible. Others run to get it in the grass. The
person who finds it hides it and returns to the group without imparting information to others about the tsüü. The players can be divided into several teams. If a player has a certain guess and suspicion about the one who is carrying the tsüü, that player can attempt to grab it from the player. The competition of the players to catch the tsüü makes this game very interesting and joyful. 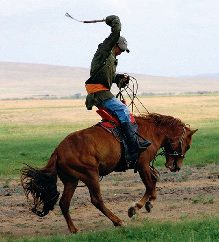 Wolves and Marmots “Mr.Wolf Could You Give Us Your Lighter?”