Board games include shatar (Mongolian chess), draughts (checkers) and the deer game. These are very ancient games.

Shatar or Mongolian chess is considered to be the king of the board games. It needs keen intelligence, creative thinking, and patience; chess is a type of intellectual sport. There is even a folk saying that chess players live longer. Although there is no official affirmation of this, it is said that chess originated in Mongolia in the period of the Huns. There is a hypothesis, though, that chess could have been brought into Mongolia through India and Persia in the thirteenth to fourteenth centuries. This also could be linked to the fact that the Huns persistently attacked India and stationed their troops in distant territories for generations. Mongolian chess is one of the various board games that are part of the intellectual fund of humanity that has been shaped by nomadic Mongolians. In terms of figures, terms, and movements, Mongolian chess is distinctive from European chess and its theme is more closely linked to the herding livelihood. Rather than themes of armies and war, Mongolian chess manifests
the peace-loving mentality of animal farming people. Features of Mongolian chess Mongolian chess has totally different figures than European chess: 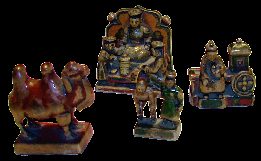 Bishop)
• Mori (Galloping or bucking horse; instead of a Knight)
• Tereg (A pair of horses harnessed to a cart; instead of
a Rook)
• Khüü (Wrestling kids; instead of Pawns)

A variety of Mongolian chess games are made using interlocking methods, as exposed in the International Intelligence Museum established by Z.Tümen-Ölzii, the state laureate cultural figure and top innovator. Created by him, those games of chess include examples from both ancient and modern periods. Each chess figure has its own unique movement and deep meaning. For instance, the King (Khaan) moves in short distances showing dignity and its command over the other figures. The King works to strategically prevent the counterpart King to move. Whereas the Dog serves the King with loyalty and moves in both short and long distances, it doesn’t make the movement of the horse. The Dog protects the pawns and other figures and sacrifices itself when needed. It is the strongest figure in the game. The rook makes long and short straight movements in all four directions. Livestock breeders note the pasturing practice of camels and reflect them in Mongolian chess. The rook, for instance, makes no straight movements, but instead moves to the right and left sides, making corners in short and long distances. As for the Knight (Horse), it moves resembling a hobbled-horse movement.

With regard to how the game is played, the differences between the rules for Mongolian chess and those for current international chess are:
– It is forbidden to check and win with the Horse during an ordinary game, as Mongolians regard the death caused by the Horse to be an evil death;
– In Mongolian chess, the first movement is compulsorily made by the Pawn. When playing with a person living in the locality, the starting player moves the pawn in front of the Noyon (Prince) two times and then moves with a single push in following moves;
– In the case of the Queen, it moves with a single step; but when moving straight, it can take several steps at the same time;
– When one side forces the counterpart to stay with a single King, it is considered a draw, which is called ‘nütsgerlee’ (“to become naked”);
– When the King and other figures have no moves of the counterpart without forcing a check-mate from the counterpart, it is considered a draw and called ‘Jid’;
– Only the Pawn that appears on the eighth line can become the Queen (Dog). There are a variety of interesting starts and wins. For instance, most common starts are the cantering of two camels, the trotting of two horses, and an attack of cart and horse. There are also artistic wins, such as ‘Tavan khaluun khurteekh’ (Bestowing five hot) with lyrical phrases like:

“Hot checkmate of an empty cart”

“Threatening checkmate of a lion and tiger”

“Kicking checkmate with a trammeled horse”

“Courageous checkmate of an orphan boy” and

“Winning of the dexterous bride,” and so forth.

Mongolian chess is improving and also integrating with the current international rules. Expanding its range, it has become a great sports attraction for all people, regardless of their age and gender. 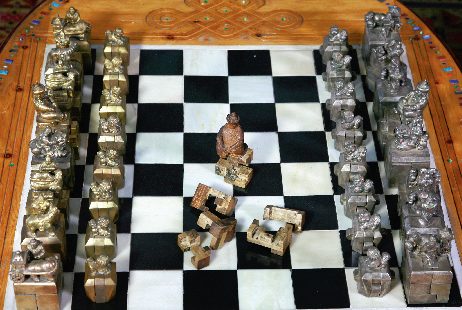