One of the richest legacies developed by Mongolians for many centuries is the lengthy heroic epics. An epic is the largest genre of poetry and it was formed in the process of folklore development. Everybody is interested in how and when the epics originated. These magnificent expressions of the cultural legacy of Mongols likely originated as tales that spoke about the gallant deeds of our ancestor-chieftains and brave warriors.

Scholars believe that epics were developed into their sophisticated form in the sixth century CE. They are performed by a minstrel who is gifted at relating stories or in speech-art and can accompany themselves with a tuneful melody on a horse-head fiddle, tovshuur (two-stringed lute), ekil (western Mongolian fiddle with two strings), or huuchir (four-stringed bowed instrument) according to established rules and customs.

The ambitions of ancient nomadic people who seek to live in harmony and quest for peace are reflected in the actions and views of the epics. Famous Mongolist J. Vladimirtsov noted that Mongolian epics are strongly linked to life on the steppe. The epics are national poems gracefully expressing nomadic views and ambitions by describing their conditions. The subjects of Mongol epics include gallant knights, beautiful damsels, romances, trusty steeds, marriages, and struggles. They are typically divided into one of several types of forms: 1.) folk-tale types of epics; 2.) narrative-types of epics; 3.) anthology-types of epics. Still, all Mongolians call them heroic epics.

The art of reciting the Mongolian epic thrived until the beginning of the twentieth century. These epics can be enormous – the Jangar epic consists of several thousands of lines of text – and several of the most famous Mongolian epics, such as the Jangar, Geseriin Tuuj, Khan Kharangui, and Bum-Erdene epics, have become the subject of studies at the worldwidelevel nowadays. Over 280 epics are registered at present. Today there are about ten minstrels of different ethnic groups, including the Uriankhai, Bayad and Khalkha nationalities in the western part of Mongolia. These artists have inherited the rare cultural legacy of several thousand years of history and they are making contributions to revive the epic reciting traditions and bequeath them to the young generations. The epic reciting art is called “tuul’ khailakh”. A person who is skilled at reciting epics is called a “tuulchi”. 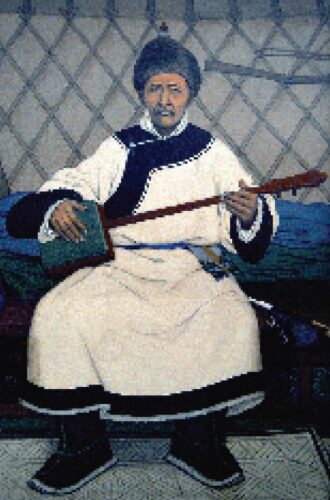 Mongolian epics consist of from hundreds to thousands of lines of text. To become minstrel (tuulchi) it is necessary for a person to have a good memory, good imagination, and great interest in reciting epics. This is the skill which can be taught by minstrels and obtained with one’s own efforts. There is a very strict rule not to change a hero’s name or to re-order the actions of the epics. Nor is it acceptable to recite an epic at every place. The recitation of an epic is acceptable only at solemn state ceremonies, weddings, Naadam festivals, children’s hair-cutting ceremonies, child-naming ceremonies, new gerwarming ceremonies, ceremonies held before hunting, mountain-worship and cairn-worship ceremonies. They symbolize the good future for coming generations.

Some epics can be recited in summer. For instance, it is forbidden to recite the epic Khan Kharangui in summer. The reason is that the hero of the epic rebelled against heaven and earth and rescued the populace from lighting. Thus, Mongolians

believe that if one recites the epic Khan Kharangui in the summer, lighting may strike. It is unacceptable to recite epics on ordinary days in one’s household. The recitation of an epic should begin at the moment when the stars appear at night. The head of the household brings the tovshuur to one’s home and places it in the honourable part of the home and spent several nights there. Then the minstrel is invited to the household. A ghee lamp is kindled. The offerings are prepared. The epic is selected by discussing with people who are present. If one wishes to have a child, the epic ‘Erkh nachin khartsaga’ (‘Spoiled tierce-hawk’) is performed; if one wishes to be without misfortune, the epic ‘Khan Kharangui’ will be performed; if one wishes to be fortunate, the epic ‘Bayan tsagaan övgön’ (‘Rich white old man’) will be performed. If one wishes to exorcize evil spirits, the epic ‘Taliin khar bodon’ (‘Black boar of the steppe’), and ‘Khürel arslan magnai’ (‘Forehead of bronze lion’) is recited.

The Mongolian epics are very lengthy. The recitation of epic breaks several times during the night.  Some epics are recited for several nights. There is a forbiddance to make a noise while minstrel starts reciting an epic. If you knew one or two epics, you were not recognized as tuulchi or minstrel. There was a custom to eulogize the rich resources of the local mountains, rivers and game before a minstrel starts reciting an epic. Mongol Tuuli: Mongolian Epic was inscribed on the UNESCO List of Intangible Cultural Heritage in Need of Urgent Safeguarding in 2009.