The internment of the body in Mongolia customarily belongs to kings and nobleman, saints, and shamans. The dead body of ordinary (common) people is traditionally left exposed at an open countryside places. But the honouring of remains is common and mongolian funeral proceedings are almost the same. According to tradition, the dead bodies of kings and nobleman were entombed in special places. The dignitaries of monks were embalmed or cremated and placed in stupas. Shamans (male or female) were buried with their drums in mausoleum-like spaces built on the highest places.

As mentioned above, the dead bodies of common people were left exposed at an open place of the countryside. Such a way of burial was normal in the vast countryside. But it is not suitable for urban people. So the interment of the dead body is today more prevalent. 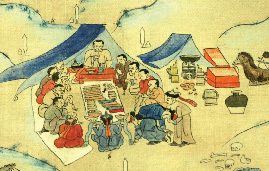 Anything that glitters, such as mirrors or glasses, are removed from the ger. If they are unable to be removed they are covered with black cloth. When a monk, aged man, or devotee takes their last breath, chanting monks are invited. One of the chanting monks tolls the knell and blesses the dead body with a sacred sutra. According to tradition, a monk is invited in any case. He performs an exorcism, which drives out any evil spirits. He also scatters the body with juniper needles and perfume. Then the top felt covering is closed and its rope is turned in the counter-clockwise direction and attached to the western wall lattice. If the door of the ger is a felt flap, it is stretched onto the roof of the ger. On ordinary days, these kinds of actions are forbidden. The clothing of the dead person are sterilized and aired.

The Mongolian funeral procession is performed according to Buddhist ritual. A monk specializing in the almanac can be consulted about what to do with the corpse. Customarily, a man or woman close to the deceased offers a khadag to this monk. The monk explains what to do, such as how to touch the remains, how to choose where to bury it, what to prepare for the funeral, and in which direction to move. He also indicates what coloured cloth is to be used to cover or wrap the corpse and what happens to the dead person’s soul. These steps are all a part of the preparations for Mongolian funeral. The remains can stay in the ger from three to seven daysbefore burial. The ordinary man’s remains can stay for three days without burial. The remains of parents and elder paternal or maternal uncles and aunts can stay for seven days without burial.

During this period, there are actions that are traditionally forbidden, such as speaking loudly, making noises, and quarrelling. Traditionally, we request from the mountain spirits a patch of land to use to bury the dead body with the assistance of the monk. This plot of land is marked with a horn of an antelope and a drop of milk on it. This is the sign of honouring the dead person. After this, the grave can be dug with mattock and crowbars. According to the almanac a coffin can be chosen andits exterior and interior is padded. When the inside of the coffin is of a suitable size for the dead body, the exterior is decorated. The inside lid of the coffin is covered with whitish blue crepe and the bottom and inside walls of the coffin are covered with green crepe. These two colours symbolize the blue sky and green earth. The exterior of the coffin is coveredwith the blue or red and black cloths.

The dead body can be carried away on a Monday, Wednesday, or Friday, which are considered to be auspicious days. The burial must be finished in the morning or before lunchtime. According to the almanac, the dead body can be touched by a person (whose birthday is compatible with the dead person). Then the husband or wife, children, and close relatives can also touch the body, after which all those present can express their honour to the deceased. There were customs to honour the dead person by the people who disposes of the corpse, such as tucking their cap in or turning its front in, or roll their sleeves in, turning their collars in, or turning the skirt of their gown out. Those who dispose of the corpse do these things. This is a way of communicating with the world of the dead. These customs are forbidden for everyday behaviour, except during the time of the funeral. Traditionally, the dead body was carried away by loading camels in the Gobi or an ox-drawn cart in hilly areas. In recent times, the dead body is carried away in a coffin loaded onto a lorry or van and taken to a cemetery.

When the dead body in the coffin is taken out from ger, a piece of wood is placed at the door. The coffin is taken out of the ger head-first to symbolize this as a reverse-event. The Mongolian funeral procession starts from the dead person’s home and ends at the cemetery. Nowadays, a photo of the dead person is carried in front of the procession and people who are grieving the passing of the deceased hold up bunches of flowers. The coffin will be carried to a lorry directly by a certain number of the sons, cousins, or others close to the dead person. These people carry the coffin on their shoulders to the van or lorry.

The ger is pitched up and marked with a stone, which indicates that it is forbidden to cross this patch of land for a certain number of days. When the funeral procession starts from the ger to the cemetery, a certain number of people remain and wave a number of items in the direction of the funeral procession, including dairy products on a plate, a tankard of tea, and a sutra of ten thousand poems called Jadamba, which speaks of the virtues of the dead person. Those who are in the funeral procession are forbidden to talk to each other or to look back. The leading cord of the camel loaded with a dead body can be slung over the shoulder of the driver who is steering the camel. This specific act is a sign of the honour of the dead person.

Sons, daughters, close relatives, friends, and monks participate in the funeral ceremony. When the funeral procession arrives at its destination, the remains are taken off the carrier and placed on a long piece of white felt (nowadays, a rug). A hard white rock is placed under the head of the coffin. Four poles with the letters of a mantra are erected in four directions. At this moment the monks chant and scatter grain to please the mountain spirits.

At present, the dead body is placed to the west of grave. The grave is cleaned while people in the funeral procession stand in silence. It, briefly, is a ceremony to part with the dead body. Next, the deceased person’s wife, husband, or children may say a few words. Then the oldest friend of the person pays tribute to his or her life and work. If the deceased was young, the elderly people touch dead person’s forehead with their hands as an expression of love. If the deceased was older, young people bow to the knee of the dead person, which is an expression of respect and honour. After these proceedings those who part with the dead person, stand up in silence to pay a last tribute to it.

Then a small amount of milk is poured and a handful of grains is scattered. The coffin is bound with rope and then lowered slowly into the grave. The ropes are then gently pulled up. The earth is scattered over it and piled onto the grave, which is marked with a tombstone. There is an epitaph with a surname and name, dates of birth and death. The upper part of epitaph is often circular or in a sharp triangle. The six letters of the mantra are sometimes engraved. This is a symbol of benevolence. Some graves are piled with earth only. These graves are decorated with stones and covered with grains. There is a wish that the deeds of the dead person be prosperous just like the sun and moon forever, and thus, figures of the sun, moon and fire are often inscribed. After the burial, the place around the grave is cleaned.

The people in the funeral procession go around the grave three times in a clockwise direction and demonstrate their honour and grief. Then they take transport and go back by a different way than they came. To look back at the grave is forbidden. The people who have stayed at home, re-pitch the ger and clean the quilted felt rug, rearrange the furniture of the ger, and prepare food and tea.

A ceremonial ritual is then held in which those who participated in the funeral ceremony pass between two fires and wash their hands with black and white holy waters as a way of cleansing themselves of the spirits. They are fumigated with burning juniper needles and incense, and then treated to tea and food.

At the last moment, the most senior person or most important man or woman at the ceremony expresses their thanks for sympathizing with them in their bereavement. There is no tradition of drinking vodka or wine at funerals in Mongolia. At the end of the ceremony, there is the distribution of incense, matches, candles, and upturned vessels, including cups. The driver of the lorry or van, the person who disposed of the corpse, and those who helped greatly are rewarded with khadag, tea, and some money. An idol for the dead person is created and Buddhist sutras are chanted for forty-nine days after the burial ceremony. If the soul of the dead person doesn’t leave its body, there is a special spell to make this happen.

The close relatives of the dead person are forbidden to enter and enjoy the feast, to gather for the Lunar Month festival, to go hunting, to kill any animal life, or to have their hair cut before the end of the forty-nine days of official bereavement. In our funeral ceremony there are certain types of shamanistic customs, but they have been enriched by Buddhism, particularly by the yellow sect of Tibetan Buddhism.

There is a custom to do something special in memory of the deceased, including requesting benedictions and eating only millet for the forty-nine days in bereavement. At the end of this period, we feed stray dogs and do ourselves a funeral repast. Nowadays, due to urbanization and globalization, a more worldly funeral system has been introduced in Mongolia. The cremation of dead bodies is a new and increasingly common practice.