Ornaments are a very important part of the Mongolian decorative arts. They represent traditional artistic expressions that depict the origin, essence, and meaning of various things and phenomena of our life and the universe. The first ornamental figures and patterns included realistic descriptions of things and happenings; later, they have come to include dots, lines, and geometric shapes. Mongolians describe ornamental figures in three different ways: animal-ornamental patterns with geometric motifs are called khee (pattern), ornamental patterns with round curved grooves are called ugalz (scrolls), and ornamental patterns with dualistic features are called arga bilig (spiral patterns). Ornamental patterns reflect the common sense approach to life that is passed on from generation to generation in Mongolia. Ornamental patterns are classified in terms of their purpose and placement: central ornaments, corner ornaments, angle ornaments, and fringe ornaments. In general, khee (pattern) plays a main role in the design, whereas ugalz (scrolls) functions to enrich the primary design. An ornament capable of re-creating the various patterns is called a prototype ornament, and a new ornament that originates from the prototype ornament is called a derivative ornament. Over time, the names, meanings, and purposes of ornaments have changed, and the ornament features have become more abstract. 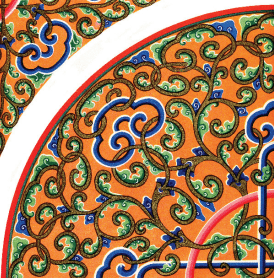 that can be expressed in secret or satirical -ways. For instance, there are ornaments that symbolize strength, solidity, love, protection, solidarity, unity, multiplication, prosperity, good faith, longevity, good health, security, fame, and honour. The ornament ongin khee symbolizes complexity; ornaments of the sun, moon and star symbolize eternity; cloud ornaments symbolize the wish for regular precipitation; mountain ornaments, the wish for progress; fish ornaments, the belief in the inherent dualism of nature; and tümennasan and ölzii ornaments, the wish for unending abundance and eternal goodness respectively.

Animal ornaments are one of the great expressions of the Mongolian nomadic animism.For instance, cloud ornaments have been reworked into ornaments representing wild sheep, camels, and dragons. There are various kinds of fish ornaments that depict two, three, and four fish, each symbolizing Oriental dualism. 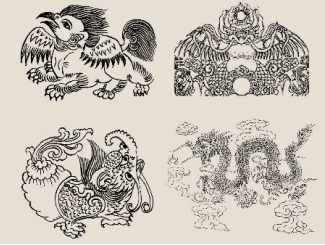 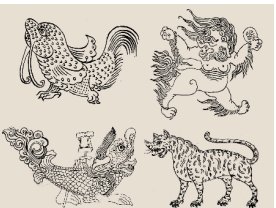 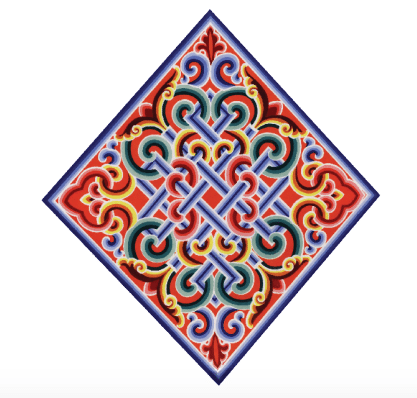 The Mongolians have an ancient tradition of describing and depicting various phenomena of nature and the universe, including clouds, mountains, water, the sun, fire, the moon and the stars. Ornaments of this type express the beauty, solemnity, magnificence, power, and mystery of mother earth.The dolgion khee or waved ornament originated in the time of the Hünnü and is a beautiful ornament that symbolizes the rhythm of natural phenomena. The fire ornament is a symbolic expression of goodness, luck, power, and progress. The three part of the fire flame ornament represent the past, present and future. As shamanism is the initial spiritual belief of the Mongolian people, ornaments of the sun, moon and stars are linked to shamanism. These ornaments appear in vivid and diverse styles. For example, the sun can be depicted as a single circle or as multiple circles. It is also depicted with rays of many different styles. Star and fire ornaments are placed on respected items, such as idols, totem items, and on the case that holds fire-making tools. 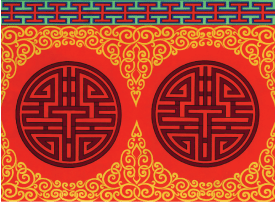 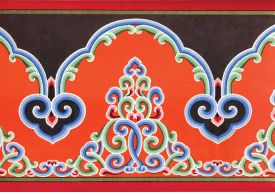 Geometric ornaments also have an ancient history in Mongolia. At first, they were relatively simple in design. But they have become more complex and precise. Exam 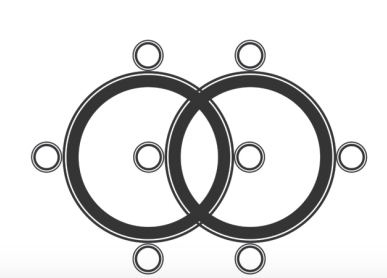 ples include the modern tümennasan khee, alkhan khee, and tümen ölzii khee, which evolved from the ancient ornament chagtan khee, which was used during the period of the Hünnü Empire. The swastika is another example of a geometric ornament. It originated from a depiction of four horse-heads during the Stone Age and Bronze Age. There are various versions of swastikas in existence, expressing different dynamic meanings.The triangle, circle, square and other geometric figures evolved with certain sequences and rhythms, and thus they have created a variety of other ornaments. For instance, zooson khee, khorol, khaan buguivch, nar, saran khee, and uulan khee each have the structure of the khumban khee repeated fourfold or eightfold. Mongolian pastoral nomads have used different versions of ölzii khee in the ties and knots they use 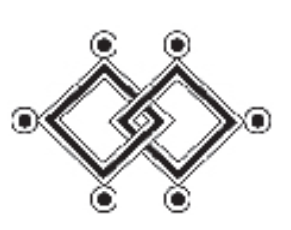 in their traditional ways of life. Among all of the geometric ornaments the Mongolians use, ölzii khee is the one that lies at the centre, and that embodies the deepest and most honourable meanings for them. The evolution of the ölzii khee has been shaped by where and how it has been used, namely to decorate the centre, edge, corner, or overall background. Mongolians have created various other versions of ölzii khee, including tümen ölzii, dan ölzii, davkhar ölzii, tuuhai ölzii, bashii ölzii, toonot ölzii and zaitar ölzii. Ölzii khee, khaan buguivch and khatan süikh are similar in terms of their basic structure and meaning. It is interesting that the main points that make up their shapes become ölzii units. 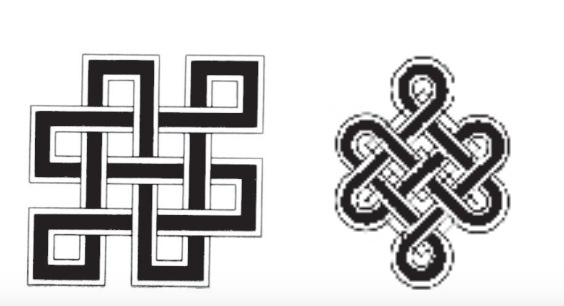 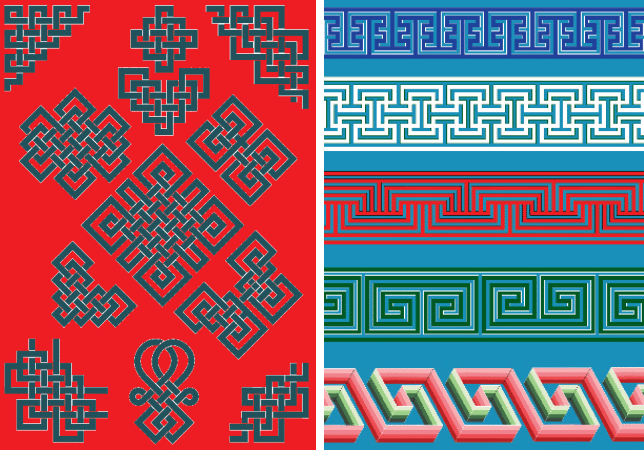 Emblem ornaments are complex figures created with a variety of abstract designs based on spiritual beliefs. These could be totem items, such as the sun, moon, sky, stars,animal figures, and other symbols with special meanings. 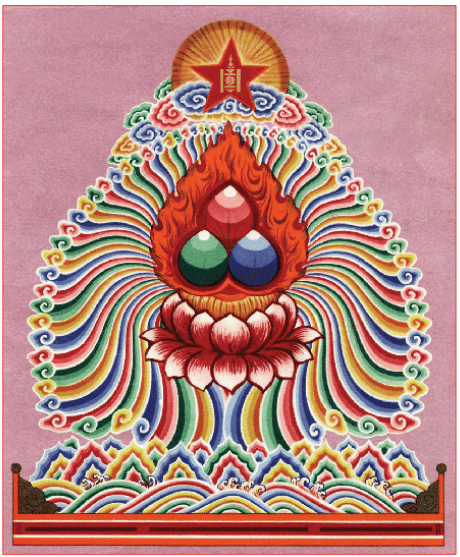