The Mongolian wedding ceremony is basically a confirmation of the marriage of a young couple and a chance to wish them a happy life together. This is also a chance to show the high trust in them from their parents, relatives, and communities. All those who attend the wedding ceremony wish them to be firm and to have a happy family. The traditional wedding ceremony of Mongolia is comprised of several parts: beseeching a bride and taking a betrothal gift to the bride-side; preparing for a wedding; undertaking the wedding ceremony, and holding ceremonies after the wedding. Those proceedings are to be conducted according to custom.

The proceeding starts by sending out two horsemen whose compatibilities are suited to this event. These matchmakers ride on white horses to beseech a bride who was chosen to be a wife for one’s bride-groom. This is the start of the wedding. The matchmakers reach the bride’s family and offer an honorable scarf to the father of the bride, saying to him:

We have a deer hunter,

You have a dove-tailor of sables;

A horse is treasured to bring far near,

A girl is treasured to make kin

These words are terse and witty in a poetic manner. The parents of the daughter do not give their consent immediately but say they will consult among relatives and shall have a definite answer later. Then the two matchmakers leave. After a few days, the paternal or maternal uncle, with a bride-groom and bearing presents, visits the bride’s family to try to get the consent of the bride’s parents. After getting the bride’s parent’s consent, they visit the bride’s side a few times and confirm their consent. This signifies that their parents want their children to have a firm marriage and a happy life.

On the last visit of the marriage confirmation, both sides agree on the specific betrothal gifts and wedding dates. Before the wedding day, the bridegroom can give presents to his bride’s close relatives. It is considered to be a betrothal gift, but the gift consists of materials such as utensils and cloth, which the couple could use to sew a dress for the bride. But the most important items among the betrothal gifts should be an odd number of animals. A white horse bearing a khadag (sacred scarf) on its neck is the most precious gift.

A dowry is given from the bride’s side. The parents of the bride, for instance, could prepare an ornamental hair fillet, brooch, gowns for winter or summer, pillowcases, chests, or a certain number of animals for the dowry. These gifts are considered to be property given to one’s own daughter when she married. 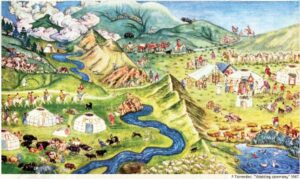 The bride’s parents attend the feast, but the bridegroom’s side does not. The bride’s would-be uncles on both sides come to her and take her to their homes and arrange a feast and treat her with gifts. After the above-mentioned feast prior to the wedding day, the bridegroom’s parents prepare a new ger and cover it with felt and, following custom, the bride’s side provides girdles for the ger, the crown-covering felt, and the ger furniture.

The wedding ceremony is usually composed of three parts: the ceremony at the bride’s home; the wedding ceremony itself, including a ceremony of welcoming the bride; and the feast held three days after the wedding. The team charged with bringing the bride to the wedding, which includes the bride-groom, comes to the bride’s home. They bring boiled mutton, airag, milk-vodka, cheese, silk, and an khadag. Then the bride’s parents mix the airag of the bridegroom’s side with their own. The mixing of airag from both sides in the churn is called “the ceremony to combine the airag in the churn,” and it symbolizes the establishment of a bond between the bride and bridegroom sides.

At this time, the eldest daughter-in-law, who is accompanying the bride, announces that it is time to go to the bridegroom’s side. The caravan loaded with the dowry and gifts starts toward the bridegroom’s home. The reason for this is that the furniture and other gifts should be arranged in a new ger before the bride’s arrival. The parents prepare the bed, pillowcase, mattress, chests full of goods, utensils, racks, kettles, ladles, and quilted felt rugs. In addition, they provide her daughter with a saddle, bridle, whip, and deels for four seasons (enough to wear for three full years), and various items of adornments.

A specially appointed man with a compatible year with her can take the bride from her home at the moment of dawn. At this moment, the bride converses with her friends of the same age. They refuse to let her go and stand holding each others’ sashes, but the bride is forced to let go. This is just pretense. The bridegroom and his attending people together with the bride go around the bride’s ger and reach the bridegroom’s parent’s home at sunrise. This is a very common custom.

The father of the bride invokes benevolence and stays at home, but her mother goes with her and stays with her for three days. Only an odd number of people can take a bride from the bride’s side, and only an even number of people can return her. When the bride and her attendants approach the bridegroom’s home, a horseman with a plate full of dairy products welcomes her and her attendants. There are two parallel fires lit at this time. The couple walks between the two fires. This is a symbolic consecration or cleansing by fire and is meant to bring happiness.

As soon as the bride arrives, white felt is laid in front of the new ger. The sun is symbolized by grains on the right side of this felt and the moon is symbolized by grains of rice on the left side. The bride-groom can stand on the symbol of the sun, the bride can stand on the symbol of the moon. The bride-groom holds the condyles of a tibia bone, while the bride holds the medial malleolus of a tibia bone. They turn toward the sunrise and pray to the rising sun. They then bow and hold up the tibia to the rising sun three times. This is a vestige of the sun-worship of our ancestors. The two ladies from the bride and bridegroom’s sides (they are usually elder daughters-in-law) conduct the bride to the ger. The hair of the bride is parted on the crown. She puts on the wife’s garb and hair ornaments. The mother-in-law offers her a cup of milk, and the bride can taste it. After it, there are proceedings of bowing to the fire, Buddha, the parents-in-law, the dog, and the fermented mare’s milk. Every bowing has some kind of sayings. The most important prayer of those is the prayer to the fire. It has an established precedent.

This ceremony provides evidence that Mongolians worshipped fire, as has other peoples of the world. From ancient times, we have deemed the fire to be sacred; it is the spirit of the hearth that inhabits a fire.

At the beginning of the ceremony, two elder daughters-in-law from each side of the young couple conduct the bride and seat her with a bended knee on the left side of the white felt of the bridegroom’s father’s hearth. At this moment the two hands of the bride are clad in the white lining. The bride offers odd pieces of silk, grease, and ghee to her father-in-law’s fire and bows three times to the trivet. The trivet is the most important item of the hearth. Its three legs are believed to symbolize the father-in-law, the mother-in-law, and the bride. It signifies that the father-in-law is on the right side and mother-in-law is on the left side and the bride is at the front. The bride’s prayer to the fire is similar to the odes connected to fire worship. This shows respect for the heart of the father-in-law and is a request of love.

Even though the current

Of the Ganges River is powerful,

It flows to the slope of the mountain;

Even though steel is strong enough,

It can be made supple in the hot fire

This stanza reminds the listeners of the need to follow the laws of life, in which everything is ruled by natural law. The fledgling of the nightingale, when its young grow up, takes wing to far mountains. At the ceremony after the bride’s arrival in the new ger, the following benediction is recited: I

t is said that there is an affinity without meeting

It is the fate of previous deeds

It is said that there is an amble without training

It is an endowment from Heaven

There is an easy approach

Even though the four white mountains are difficult to climb up

Forty-thousand people are many

They came from four parents

The white clouds flow across the air

They have a water connection

The living beings of the universe are many

They have affinity connections