What is Mongolian Wrestling?

Mongolian wrestling is the essential part of the national festival of Mongolia. The functions and rules of Mongolian wrestling are not only meant to test the pair of wrestlers’ strength and prowes, but to link it with national elements of other traditional arts and customs. There are certain physical movement that are performed before and after each wrestling bout as rule. 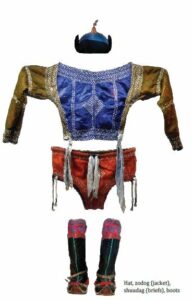 These functions have been elaborated and developed for many centuries. Everything has deep meaning. One of the peculiarities of Mongolian wrestling is the costume. The epic Eriin sain khan kharangui (the best man Khan Kharangui) speaks about a wrestler’s jacket made out of a stallion camel’s hide and briefs made of bull’s hide. The wrestler’s jacket and briefs are the signs of strength. Later on, the costume of wrestlers became more elegant.

At present wrestling costumes consists of a hat, zodog (jacket), shuudag (briefs), boots, stockings and boots’ bindings. The jacket and briefs afford a wrestler the ability to hold his opponent during the wrestling bout. The well-tailored jacket and briefs adapt themselves to the shape of wrestler’s brawny body. This tight costume affords a wrestler’s comfort to move. The wrestler wears an ancient hero’s helmet-shaped hat. It attests to the fact that the wrestling of Mongolia originated from among strong men who tested the brave deeds of ancient Mongolian warriors. Mongolian wrestlers wear high-boots which keep their footing firmly and prevent their legs from slipping when wrestlers trick each other with their legs. They wear felt stockings which play a role in protecting their legs from injury; the stockings are stitched with auspicious ornaments, which add grace to the wrestler. The bindings of the wrestler’s boots are also kind of a grace to the wrestler. 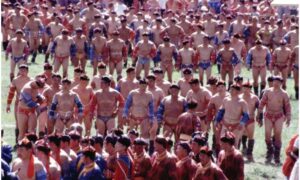 Mongolian wrestling has no differences of weight and age; if a wrestler’s limb (an elbow, knee, head or other body part) touches the ground, it is considered a defeat. At the national wrestling competition, 256, 512, or 1024 wrestlers compete. At the local level 32, 64, 128 or 256 wrestlers compete. There are two wrestling sets. One wrestling set consists of eight wrestlers. Another consists of eight wrestlers. There are two lines of wrestlers. One wing is arranged to the eastern side of a wrestler’s ring. Another one is arranged to the western side. 16 wrestlers compete in one bout at the ring of wrestlers. Every wrestler has its own second. The wrestlers are arranged on their line by the sequence of their titles. At the first and second bouts wrestlers can struggle with their opponents on the assignment. At the third and later bouts, a titled wrestler challenges his opponents to wrestle. But recently, the challenging has become less than it was in the past as the result of amendments made to the wrestling rules.

The wrestling coach takes off the hat othe f wrestler and chants his title and exploits together with his name in a loud voice. The wrestler flaps its hands in imitation of the wing flaps of an eagle, hawk, falcon, or garuda. Only then does he go into the competition ring to meet and begin to wrestle with his opponent.

An ancient chronicle’s description of the wrestler’s fluttering says, “the hands of the wrestlers flap in the shape of the garuda’s fluttering, and his chest bulges out in imitation of a lion’s breast”. The wrestling imitates the tussling of lions or elephants as each tests the other’s might and skill. They skillfully trick each other with hands and legs.

During the wrestling period, each wrestler’s coach hints at their own wrestler’s imprudence. These hints are cryptic remarks that resemble a concise poem. The coach of the wrestler should be adept in wrestling and various tricks and be able to chant the wrestler’s title and his exploits in a tuneful voice. There is also a group of referees. They sit on a bench under an erected tent in the south of the wrestling ring and referee the match. These referees are former wrestlers who have much experience at wrestling and are considered fair in umpiring. If there is a dispute concerning a match, these umpires can settle it. The winner can flap three times and come back to the loser. The winner stretches out his arms in a gesture called takhim avakh or toos buulgakh (to take a knock-knee or to clean the dust). The loser unknots the waist-band of his jacket and bows his head under the stretched arm of the winner as the sign of defeat. 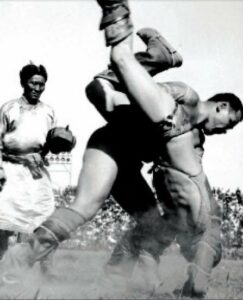 The flapping of wrestler’s arms is a dance meant to imitate the flapping of birds. The wrestler is said to imitate the flapping of the garuda as he flutters and slaps his thighs. He stands ready to tussle with and looks askance as elk do and seizes his opponent like a hawk that swoops down on its prey. This description of the wrestler’s movement is the description of mighty animals. That is why our wrestlers move in a manner of a mighty animal when they stand they look like a mighty bird flapping its wings. They slap their thighs and demonstrate their readiness to compete. The melody of the wrestler’s exploits, as recited by the wrestler’s coach, arouses enthusiasm similar to that of the hawk that swoops and hovers in the fresh air. The reciter improvises the character and feat of individual wrestler in a tuneful voice.

Mongolian wrestling title recitation is an art song which has the melody and verse. The wrestling ceremonial dance has the characteristics of a traditional dance. But the wrestling itself represents a martial art that challenges one’s readiness and power. This shows a connection between bodily movement, song, and music that reflects characteristics of compound arts when games, drama, and rituals were still deeply interconnected. The Mongolian wrestling title is recited by two zasuuls, (wrestler’s seconds) one standing on the right side of the match ground and the other on the left side, making for a spectacular feature of this ritual. There is no title, however, that is recited for the last two wrestlers remaining in the wrestling match. In Mongolian wrestling, the titles are recited at the beginning of all the odd-numbered rounds, starting from the third one, to the wrestlers standing in lines aligned on the left and right sides. The greatest and most famous wrestler shows up at first in the left line and has his title recited. To start reciting the title, the zasuul calls out, saying, “Attention to the zasuul on the right side,” with melodious and loud voice and the zasuul on the right-side responds, “Yes” or “I am listening.” In return, the first zasuul improvises an overview of the festive event and, if the top wrestler is a champion, he recites his title:

Vanguard of all wrestlers

Winner at the national wrestling championships 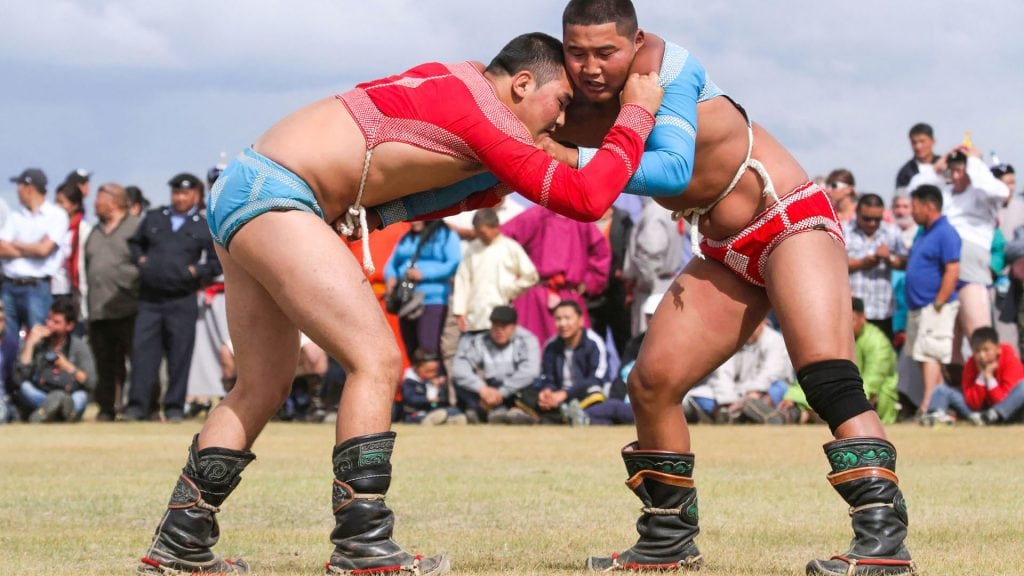 At the end of the title recitation, the wrestle then enters the arena. This recitation of the wrestler’s title has a double function. It defines the wrestler’s success, physical strength, and quickness, as well as his accomplishments through progressively higher rankings in a lyrical manner; but it also serves to encourage and inspire the wrestler for the match. Specific verses are recited to each wrestler, depending on each wrestler’s rank. Additional epithets are used to praise their strength, tactics, physical appearance, characteristics, and behaviors. For instance, ‘ulam nemekh’ (more advancing) refers to those who achieve constant progress in terms of his wrestling accomplishments, whereas ‘saruul shalamgai’ (robust and expedite) refers to those who are agile in wrestling and resourceful in any situation. In accordance with ancient beliefs in the magical powers of words, the wrestler’s title originated with an initial dedication of blessing and a wish for the power and cleverness to the wrestler.

This feature is visible particularly in the mode of Mongolian wrestler’s title recitation. The title recitation requires the professional skill from the zasuul. The person who recites the title has to foremost have a crystal-clear voice and a singer’s talent to pronounce the title verses with clarity and to melodiously describe various movements of wrestling, rank, and fame of the Mongolian wrestler.