How Did Mongols Impact The World War II

Mongulai
Aug 14, 2019 History of the Mongols, Mongolia During the War 0 Comment

On June 22, 1941, Hitler betrayed Stalin and, in violation of the Non-attacked the Soviet Union with enormous force. Hitler’s blitzkrieg plan, Barbarossa, was into motions and within a few months, Hitler’s army reached Moscow (World War II).

It had become apparent that the world was to be divided into new spheres of influence and who would be dividing it. It was necessary for the Italian Fascists, the German Nazis, the Japanese militarists, and the Soviet Bolsheviks to agree on the division of the spheres of influence. Hitler invited the USSR to join the military and political alliance that he intended to create.

On August 23, 1939, the Molotov-Ribbentrop Treaty was added to Moscow’s shameful collection of treaties. The USSR and Germany agreed to mutual non-aggression and also secretly divided the whole of Eastern Europe. The USSR claimed the right to forty percent of Poland. The Germans gave the three Baltic states, Romania, Bessarabia, and the Carpathian section of Czechoslovakia, to the Soviet family of nations. A week later, World War II began with the invasion by Hitler of Poland.

On September 17, the Red Army moved into Poland from the east and occupied the territory that had been assigned to the USSR according to the Soviet-German secret treaty. The border between Germany and the USSR now reached the Bug River. At the end of November, the USSR launched a sudden attack against Finland. This small European country, squeezed by the two big powers, mounted a formidable resistance but finally lost the Karelian peninsula to the USSR and signed a Peace Treaty in March 1940. In the meantime, Hitler continued his westward expansion, seizing Norway, Denmark, Belgium, and Holland in turn. At the end of this campaign, on June 1940, the Nazis marched into Paris. On September 24, 1940, in Berlin, in the presence of Hitler, Japan’s Ambassador Kurusu, Mussolini’s. Deputy Prince Ciano and Ribbentrop signed a treaty establishing the Axis’s a military, political, and economic alliance. When Germany attacked the Soviet Union in June 1941, the Soviets were forced to join the Allies against the Nazis. The groundwork for the relationship between the Soviet and the Western countries were laid during Churchill’s visit to Moscow that same winter. 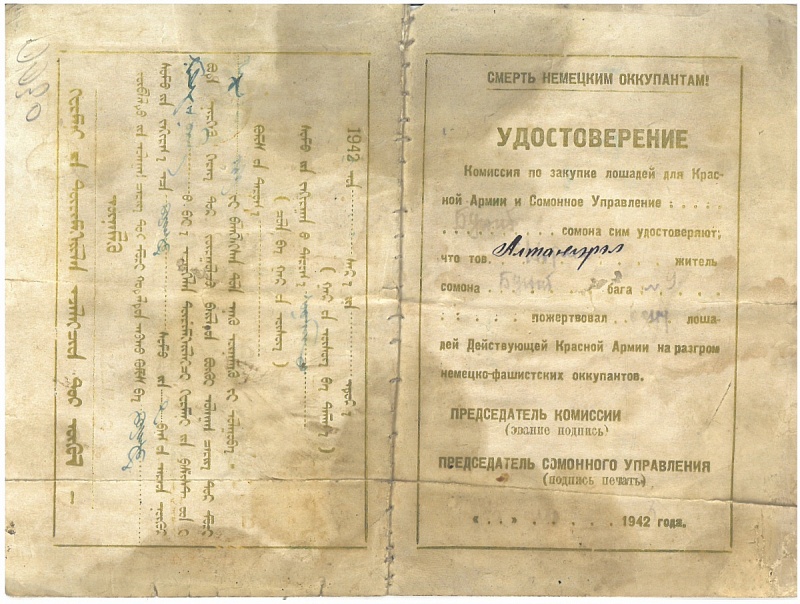 Mongolia Enters a State of War

When war broke out in the Soviet Union, the Mongolian People’s Republic adopted a wartime mentality. Mongolia’s sole source of goods was the Soviet Union and Imports stopped completely once the war began. In this sense, along with Soviet Siberia, the Far East, and Central Asia, Mongolia became the rearguard of the war. A movement to collect aid for the front spread through the country and everything available, such as cattle and meat, leather and raw materials, clothes, cash, gold, and valuables, was collected. Although the United States did not immediately become involved in the war, it rendered enormous material assistance to the Soviet Union, and as part of this help about a dozen packing plants were built. Three of the plants were built near the Mongolian border, because of Mongolia’s enormous reserve of meat. A network was created to slaughter and process animals from Mongolia at these plants and transport meat to the front. 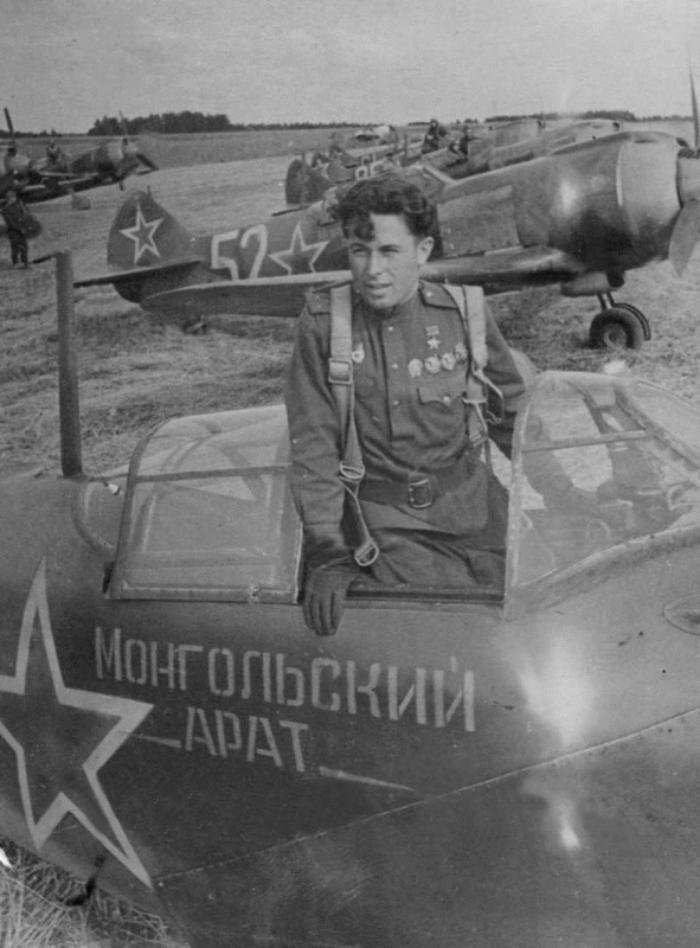 The Mongols not only uninterruptedly supplied cattle, meat, and raw materials but also collected gifts, which were transported to the front four times and distributed personally by Choibalsan and Tsedenbal.

Beginning in late 1942, 236 wagon-loads of gifts were sent to Moscow, totaling 30,000 pieces each of sheepskin dresses, felt boots, and furlined coats, and 600 tons of foodstuffs, including about 27,000 antelope carcasses. With two and a half million togrogin cash, 100,000 US Dollars and 300 kilograms of gold, a revolutionary Mongolian tank brigade with fifty-four tanks, including thirty-two T-34 tanks, was included among the Soviet Tanks First Army Guards and took part in the battle to reach Berlin. An air squadron called “Mongolian Arat” was also formed with this money. During the year of the war effort. The Mongols took an active part, as far as they were able, in the struggle against the common enemy. Thousands of Mongols made their own sincere contributions to this cause, such as Badam, who gave to the red Army, 5,000 togrog 1,600 sheep, six camels and ninety-four horses; Mangal; a woman who donated 14,000 togrog worth of items, and Dorlig, who in addition to three hundred togrog gave fifty-five thoroughbreds.

One tends to forget that along with the USA and Britain, Mongolia was also one of Stalin’s allies. If I say that Mongolia was as important as the United States; there is no need to laugh or tease. Sheepskin is a strategic raw material for making warm clothes. In certain cases, this strategic material is much more important than tanks and artillery guns. There were times when sheepskin determined the outcome of the war. With Mongolia as an ally, Stalin was supplied with this product.