There is a saying: “A hearth starts from the smoke of the trivet, a ger starts from a hut.” Erecting a new ger is part of the marriage ceremony. Some families renew their gers. This is very common among the people. During the ceremony dedicated to the raising of a new ger, it is customary to say a benediction and to give a blessing. The blessing of the new ger is giving when the felt is put on the ger for the first time. The benediction is recited when feast starts. As soon as the new ger is erected, the guests are invited in and seated. The head of the family ties a khadag (sacred scarf) to the toono (crown of the ger). The house-warming feast starts when words of blessing are uttered and when milk is sprinkled upon the crown, uni and khana (latticed wall of ger). When the blessing ceremony is over, the best pieces of meat are offered to the fire. Four pieces of cheese are placed in four directions under the vault of the ger. They will be kept there for three nights. This type of custom of blessing a new ger is probably linked to ancient fire-worship practices. 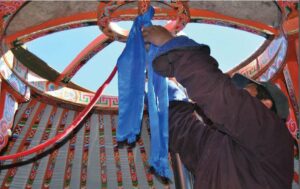 The texts of ger benedictions state specific items of each particular ger and eulogize them. This eulogy starts from the door or crown of the ger and then continues with eulogies to the walls, ceiling spokes, roof, felt coverings of the walls, crown cover, narrow ropes, decorated straps over the roofcovering, and so on. This eulogy follows the order of erecting a ger.

The roof-covering and wall-coverings are much eulogized. They are noticeable. In some ways, these are very

similar to a felt eulogy:

And roof coverings are

Made of the wool of ewes,

The water of a sandy river

And drawn by strong horses

Actually it is possible to learn much about the skills of Mongolian felt-making, felt rug quilting, and wood-working by listening to the words of the ger benedictions and ger blessing poems. After the utterance of the new ger benediction, a new ger warming feast starts according to established rules of the Mongolian feast.