Nomadic Life in Mongolia – Moving to a New Pasture

Mongolian livestock-breeders move from place to place throughout the four seasons in search of new pastures, which for centuries served as the source of their way of life. The pastureland is subdivided into seasonal camps. Certain regulations are followed depending on whether it is the beginning, middle, or end of the season. 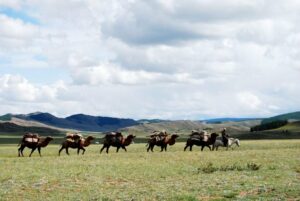 Livestock-breeders have a tradition to move from one pasture to another on a clear and cloudless day. The date to decamp is set by observing the sky and weather. When moving a short distance, breeders prefer to decamp early in the morning and arrive at the new place when the sun rises. Prior to moving to a new place, the head of the family decides where to encamp by consulting with the men and elders of neighboring families. All the necessary harnesses for conveyance, utilities, and accessories for the ger have been previously prepared for the decampment. On the eve of decampment all the furniture and ger items are dismantled and the food and products are packed together in accordance to how they will be conveyed. In the morning of the decampment, the wife of the family gets up early to prepare a morning tea and breakfast for the family, milks the cows, and offers a libation with milk or tea to the earth and sky by saying “Ölziigöö ögsön nutag” (A land that has blessed us). Afterwards everybody has their breakfast.

Mongolians are accustomed to dismantle and assemble the ger starting from right to left in a clockwise direction. For this reason the family begins to dismantle their ger starting with the girth on the right side of the door, followed by the felt cover and the rooftop, the felt-covered walls, the spokes, and lattice walls. The felt covering the crown of the ger is taken off in the direction of the new place for encampment, but the crown itself is not moved until all other furniture is loaded onto the conveyance. The crown is loaded last. During the loading it is forbidden to let any animal go over the site of the ger, due to the Mongols’ belief that “achaa khazaina,” that the load might come into sloping position.

The hearth of the ger or stone trivet (three stones propping up the kettle) are taken out in the direction of the new place as well. The stone at the front of the trivet is dislocated, but the other two stones can remain. This custom opens an avenue to the new camp site. After the loading of the camels or oxen is completed, the old sites of the ger and corral are cleaned. Ashes and rubbish are taken away. The nomads are dressed smartly. Before moving the camel- or ox-drawn caravan, the wife dresses smartly. The husband saddles her horse or camel to ride. She takes the lead camel and steers him along the eastern side of the ger site. When the caravan moves, the head of the family, who is also dressed smartly, stands on the site where the ger stood. Then he rides after the caravan. The herd of horses or cattle is driven before the caravan. The head of the family goes behind the caravan. His duty is to watch the balance of the load and to rebalance it if it comes into a sloping position. Flocks are driven behind the caravan.  The senior and junior people drive the flocks. 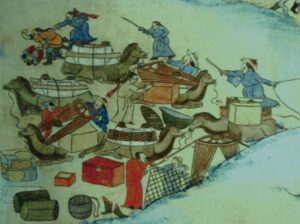 When the new place gets closer, the head of the family arrives at the place first to get prepared. When the loads come, the head of the family sets the saddle of his wife at the left side of the new site of the ger. He will later put it at the bottom of their berth after assembling the ger. Traditionally, this is regarded as respectful to women. Prior to assembling the ger at the new site, it is a custom to set the hearth by putting the three stones first as a trivet. It is forbidden to assemble a ger on an old site. Generally, the three stones of the trivet are highly respected among the Mongols as the hearth of that family. Therefore, if the family moves to another place far away, one of the three stones is taken with them. If the moving family encounters the cairn-stone, they offer it pebbles and say a benediction, such as, “More blessings for us, more stones for you.” 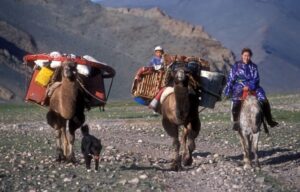 To erect a new ger, it is also a custom to start from right to left in a clockwise direction by circling the lattice walls and covering it with felt. The ger is erected on a flat surface with the centre of the door and crown set upright or slightly sloping to the right. The front of the door and crown should always be directed in a straight line to the top of a nearby mountain. It is forbidden to direct the front of the ger to the base of a mountain or the mouth of valley. According to the characteristics of some places, as in the Gobi desert or mountainous regions, people use ox-carts and camel-carts to move from one place to another. Moving by modern vehicles is seen nowadays, but the customary practices are still kept the same.