Revival and Suppression of Genghis Khan

Mongulai
Aug 15, 2019 History of the Mongols, The Khrushchev "Thaw" and The Tsedenbal "Chill" 0 Comment

The 800th Anniversary of Genghis Khan

Timur-Ochir, a Member of the Politburo, who was undergoing medical treatment in China, came back with the news that China was going to celebrate the anniversary of Genghis Khan. He knew that the Chinese wanted to promote through this event that Genghis was of Chinese origin. Accordingly, it would be offensive if the great anniversary of Genghis Khan not to be celebrated in his homeland.

The draft of the presentations, a sketch of the postage stamp, and a plan for the movie were discussed in great detail by the Politburo. Tsedenbal, Shirendev, and others were constantly checking and reminding those involved to point out the brutality of Genghis Khan. Meanwhile, Timur-Ochir showed the importance of these events and actively participated in them.

Events for the anniversary were planned to behold in the government building, and the ceremony to be opened by the Deputy Prime Minister on behalf of the government. However, Tsedenbal was cautioned about the name of Genghis Khan. Thus it was decided to organize the event on behalf of the Academy of Sciences, to hold the conference in the Ulaanbaatar Public Library and to have it opened by Shirendev, President of the Academy of Sciences.

A quiet conference, that neither was kept in secrecy nor was advertized much among the public was held in Public Library building. But the Mongolians had already heard about it and came in great numbers to the library with traditional offerings such as milk. There were many gathered in a small hall of the library, the corridors were filled, and many more gathered in the street and listened over the radio. In the hall, among others, sat the scholars Rinchen and Damdinsuren. The meeting was a modest one, and a Marxist assessment of Genghis Khan was put forward. Damdinsuren bravely defended Genghis Khan, calling him the pride of Mongolians, and revealing some nationalist feeling. 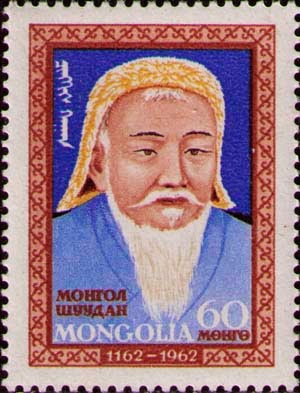 Destruction of What Had Already Been Created

At this time Tsedenbal paid a visit to Moscow to arrange the visit of Nikita Khruschev to Mongolia. However, Khrushchev suddenly snapped at him: “What’s going on in Ulaanbaatar? What are you doing printing a postage stamp with a portrait of Genghis Khan? Young people are wearing T-Shirts with images of Genghis Khan on them! What are you trying to do? Under such conditions, we can’t be talking about a visit. Go and do something about this matter”. Thus, this visit, not on a par with the anniversary of Genghis Khan, was crushed.

At the Plenary Session of the Central Committee on September 1962, Tsedenbal said: “At the same time as extolling Genghis Khan, D.Tumen-Ochir was actively ignoring the merits of Marshal Choibalsan”. Soon after, the postage stamps dedicated to the 800th anniversary of Genghis Khan had been distributed in some capitalist countries.

Several times Tsedenbal gave the order do destroy the monument built in the homeland of the Great Khan. But every time executive local officials set the order to one side and tried to keep the issue quiet. Since 1966, when Tsedenbal became the absolute ruler of the country, perhaps it was the only one of his orders that were not realized. Several projects to alter the monument were developed on the grounds that the removal of the monument was dangerous for technical reasons. However, they were forgotten intentionally every time. Any Mongolian knew that Tsedenbal would eventually leave, while Genghis Khan would forever remain is his Mongolian homeland. 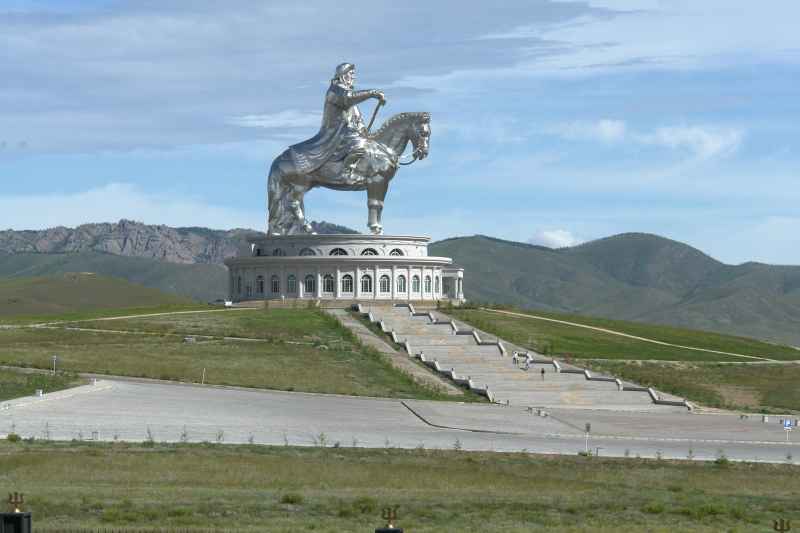 How The National Hero Became an Enemy

The 10th Great Khural of the Mongolian People’s Revolutionary Party determined to fight feudalism in Mongolia. In this way, the Party started its attack on the esteemed concepts of tradition, pride, history, and culture, revealing them to be incompatible with the ideas of Mongolia-Soviet friendship and with the principles of Marxism, and containing the essence of feudalism.

In 1955, the first Marxist history was published in Russian and Mongolian, entitled The History of the MPR, a joint publication of the Institute of History, and the Academy of Sciences of the USSR and MPR, in this book, which included many quotes from Karm Marx, Friedrich Engels, and Vladimir Lenin, the chapter “The Predatory Wars of Genghis Khan” contained the following statement: “Mongolians were free, and then in the middle of the thirteenth century many ordinary nomads lost their personal freedom and came under oppression of the Mongolian feudal ruling class…”