The ritual for summoning prosperity is a symbolic ritual to bring out the bounty of life
and nature. During this ceremony, the peculiarly patterned cloth sack or wooden box
containing grains, confections and sweets, samples of various minerals, and a piece of gold and silver are prepared. They are mostly made of pieces of silk or brocade and can be kept in the locked chests or trunks. These sacks can be brought out of the containers at the moment of the ritual day for summoning prosperity. This is an established custom.

The majority of Mongolians make the bags for this ritual with bright yellow silk and hem them with red silk or make the bag cover with bright red silk and hem them with yellow silk. But western Mongolians decorate these boxes with various jewels with various patterns on the top of their lid. The four sides of the box have the pictures of eight auspicious signs of luck. The upper parts of this box are wide and lower parts are narrow. The bottom is flat and even. There is a hole at the top of the box in which an arrow for the summoning prosperity is placed. 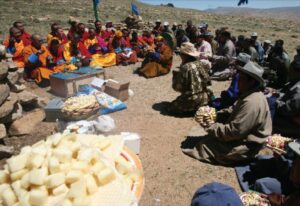 This ceremony is Mongolian traditional ceremony of bringing in an iron arrow for the summoning prosperity which symbolizes the meaning to bring and call for fulfilling wishes and longevity. There is a certain number of ceremonies including Suvarna Prabhasa, Virosana, Tara and other rituals. These ceremonies are performed in spring or in autumn. Monks perform these ceremonies at the request of a family. During the ceremony, holding the arrow for the summoning prosperity, the head of family rides his horse round the corral of sheep in a clock-wise direction and then enters the ger. The leading monk of the ritual for the summoning prosperity asks him, “Did you collect offerings well?” to which the reply is, “Yes, I did.” Those who are present in ger put on their hats as soon as the chanting ends. The head of the family holds his sack up and earnestly calls for offerings t o be flourished. All those who are present support him by repeating “khurai, khurai, khurai”. 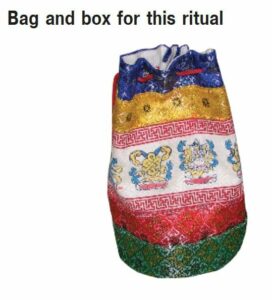 Afterwards, the lady of the family proffers ghee to her fire and makes offerings to the statues of Buddha. Within three days after the ceremony, the family does not give anything to anybody or sell any animals to anybody. It is a strong established custom. 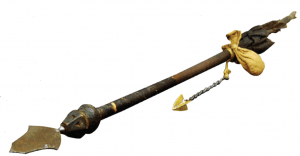 The arrow for the summoning prosperity is a long and curved stick with small ball covered with wool that is attached to its end. Three feathers are attached to its sides. Brass or bronze metal and various coloured gauzy scarves are attached to the stick below the feathers. The lower end of the stick should be clad with an iron arrow. It is an established custom that the head of family will hold up the stick and go round the corral of the sheep during the ceremony for summoning prosperity.