Not only Beijing nu St.Petersburg also shamelessly told the Mongols that they were incapable of governing themselves once they were again independent. The Russian Foreign Minister Sanazov stated that historically “the Halhs had never governed themselves independently”. He suggested that the inability of the Mongols to govern themselves might eventually compel Russia to establish Mongolia as a protectorate or even to annex.

However, Sanazov firmly opposed either step, which would “have an adventurist character, alienate us from China, be followed by enormous expenses, and, finally, weaken our positions in Europe”. The discussion between Russia and the new China had given the Russians rights in Mongolia but not the right to annex Outer Mongolia. Between 13-17 April 1912, the Russian parliament met to discuss the problem of Outer Mongolia. This group of deputies was headed by Sanazov, and the cadet leader Miluko and they were very cautioned about Mongolia.

Considering Russia a European country, they felt had the farthest reach of their foreign policy should extend into Europe and the Near East, but not expand into Asia. Sanazov felt strongly that Outer Mongolia should not be separated from China, and said, “if we separate Outer Mongolia, we must be responsible for settling up this new country. This will be a heavy burden, which will cost a lot of money and effort”. He warned Parliament about this.

Another group, headed by Volodimorov, a Member of Parliament, disagreed with Sanazov and was in favor of annexing Outer Mongolia. The military, a strong force, supported the annexation.

The Russian government finally decided to centralize its policy around Sanazov’s careful approach. So Outer Mongolia was not separated under Russia’s sphere of interest.

Given the new developments, Russia tried to further clarify its sphere of interest. In June 1912 Krupenskii, the new Russian minister in Beijing, proposed that China agree to three principles of autonomy, forbidding 1) the presence of Chinese troops, 2) colonization, and 3) Interference in the internal administration of Mongolia.

Although opinion within the Beijing cabinet was divided, Minister of Foreign Affairs Lu was strongly opposed to the idea. He warned that by accepting these three conditions, China would give up any future claim to sovereignty over Mongolia.

This concession, he predicted, might lead to other Russian demands. So China refused Russia’s proposal.

In another ploy, the Russians used Mongolia’s independence as a trump card against China. The Russian government quickly decided to sign a separate agreement with the Mongols, due to reports that China was negotiating a foreign loan. The Russians feared that this money might provide Beijing with the means to finance a military expedition against Huree.

Although the Halhs announced the formation of a totally independent government in December 1912, the Russians delayed their official response. But immediately after the liberation of Hovd, on August 23, the Russian Foreign Minister Sanazov sent a letter to Korostovets instructing him to go to Huree immediately and prevent the return of the Chinese to Hovd. Korostovets secretly set out from St.Petersburg in September, with an outline of a political agreement and trade protocol developed at the Ministry of Foreign Affairs. 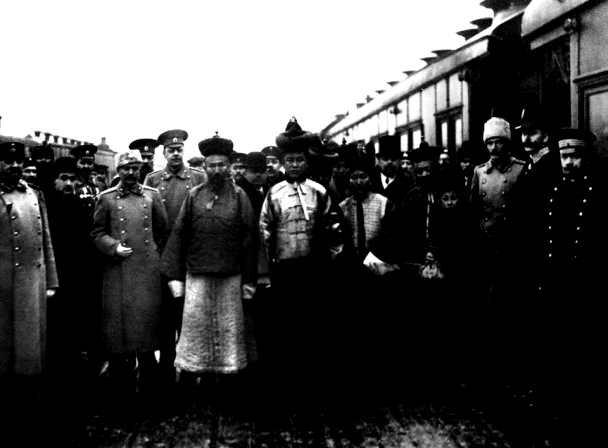 Before long, however, after Korostovests had arrived in Huree and began negotiations, the Mongols objected to the Russian draft. Ewing observed: “The Sain Noyon Khan complained that the Russian government had ignored its promise to Handdorj in late 1911 that it would support the complete independence of a Pan-Mongolian state. Tserenchimed argued that the Russian draft offered no advantages to Mongolia and that it was better for the Halh to perish than to accept freedom at the expense of their brothers in Inner Mongolia”.

Korostovets could see that Russia was falling out of favor with the Mongols and that the Sain Noyon Khan even favored direct discussions with China. He also learned that Tserenchimed was plotting against him and scaring his colleagues with the threat of Russian imperialism.

The Mongols put forward a draft treaty which, while in general having the same content as the Russian draft, added some items that changed the draft’s meaning For example, it emphasized Mongolian independence. The Russians were also to open a diplomatic delegation in Huree with a higher status than the present Consul-General, while the Mongols could appoint their own representative to St.Petersburg. Finally, Inner Mongolia, Barga, and other Mongolian regions were recognized as part of the new state.

The Mongols believed in their independence and demanded its recognition. However, the Russians were playing a diplomatic game with Beijing, which stoutly refused to hold talks.

The Russians’ main stumbling block to agreeing to Huree’s Pan-Mongolian scheme was their secret treaties with Japan. Ultimately, a treaty was reached, though the Mongols lost the battle for Pan-Mongolia. Regarding independence, Korosrovets succeeded in fooling the Halh nobles by importing the European term “autonomy”. He took advantage of the Mongols’ different culture, their lower level of education, and the lack of understanding of international relations. The Russian government did make some minor concessions of from the name’ Outer Mongolia’ and Russia agreed to raise the status of its chief representative in Huree to that of a diplomatic agent, although it refused to accept a permanent Mongolian representative in St.Petersburg.

Hope for the Mongols

In spite of untiring effort by the Chinese to persuade the Mongols to refrain from signing the treaty, it was signed nonetheless on November 3, 1912. In the agreement, the Russians recognized the autonomy of Mongolia and would aid in the training of the army. The Mongols were ambivalent about the fact that it was an international treaty and perhaps it would lay the groundwork for recognition would also strengthen their diplomatic position, and perhaps allow the unification of all the Mongols, despite Russian objections. From the Mongolian perspective, the treaty with the Russians was just the start of gaining international recognition for their new state.