Rouran Emperor or Khan, also known as Jarun. When his father Wengedi (in some records, it says he was the son of Hedohan) died, he got support from his uncle Pihuoba, but broke his trust and attacked him when he was off guard and became the Khan. Since then Rouran pastured north of the Gobi desert, nowadays Mongolian territory. They conquered the remaining tribes of Xiongnu near the Orkhon River and became more powerful. Also, Rouran brought under their command small and big neighboring states that were their flourishing period. He made himself Shelun Khan with “Hutagtai” title. Then he enacted laws and organized his army into groups of ten. He was defeated by the great army Tabgachi and was killed in 410.

South Xiongnu political and military figure and founder of the Xiongnu Zhao dynasty. Jehu tribesman. Was sold as a slave in his childhood. During this youth, he emerged as a military general of Han-Zhao state, South Xiongnu. He made the land conquered with help of his army for the Xiongnu-Han Empire under his governance and became a powerful military lord. In 319 his Zhao dynasty separated from the Xiongnu Han dynasty. In 329 he defeated Han-Zhao of Xiongnu and afterward conquered the entire North West of China. He was a talented general but used to act extremely cruel after the battle as noted in historical records. 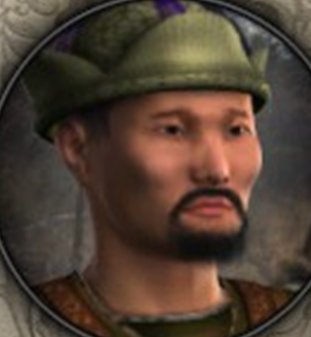 S.I.rudenko assumed that Xiongnu did not wear a shirt since no shirt was found in the burials from Noyon Uul. Grey textile baggy pants were found in Tomb No.6 The density of the textile is 14×22 fiber per sq cm. The length of the pants is 114 cm; the waist is 116 cm wide. There is a 0.4 cm thick woolen string that runs around the waist. The waist is trimmed to create a waistband and the string runs through it to make it possible to be tied. There is woolen material sewn on the edge of the cuffs. On the thighs of the pants, there are three stripes created with different color threads. Another pant that was found in the same burial had the same shape but was made from a thinner, silky material. Researchers conclude that this type of baggy pants was worn by Turks (Kazaks, Kyrgyz) and Mongols up to the beginning of the 20th century. 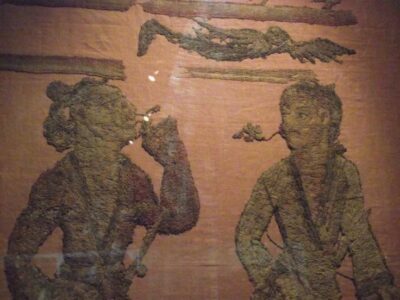 One artifact that illustrates the baggy pants of Xiongnu is a belt buckle found in one of the Xiongnu burials near Chinese Xi’an city at tomb No.140 of Keshengzhunag. On the belt buckle, there is an image of two Xiongnu men wrestling in the forest. Men tied their horses with a decorated saddle from a tree, had their long hair tied in loops behind ears, and wrestled. Two wrestlers are topless but have wide baggy pants and short boots. Chinese archeologists date this artifact back to the Warring States period, 3rd century BCE.

Until recently researchers were concluding that this image of topless wrestlers in baggy pants is similar to the traditional wrestler’s outfit of ethnic groups of western Mongolia, such as Torgut, Zahchin, Oold, Uryiankhai, Bayat, and Dorvod.

Also, a silk booty with separate thigh parts, which is extremely wide on top and narrow down was found in tomb No.6 of Noyon Uul. These thigh pants were attached to the waist with a peg. It is 109 cm long up to the tip of the booty and 50 cm wide. Silk sole was made to wear inside felt booty. On top of felt booty, Xiongnu wore leather boots of the same shape made from leather and sewn with silk thread. The sole of boots is decorated with embroidery since Xiongnu would sit leg crossed and the soles of boots were visible to others.

The main part of the silk boots was found in tomb No.12 of Noyon Uul. The original red color was used to make the boot toe turned into yellow. There is horn pattern embroidery made with orange, burgundy, and blue thread. Heelside was made with the same materials as toe, but inside there is leather to create heel grip as in modern shoes. The boot top is made from burgundy silk with a cloud pattern. There are cows between clouds. Boot shape is very similar to modern buriat boots. The toe, heel side, and the top had a red silk lining. Researchers think that these boots found in the burials are for the nobles to wear during ceremonies and during everyday boots were of similar shape and made of leather.