Shiyijian was the last prince of the Tuoba Dai state and ruled from 338 to 376 when Dai was conquered by the Former Qin. He was the son of Tuoba Yulu and the younger brother of Tuoba Yulu and the younger brother of Tuoba Yihuai, whom he succeeded in 338. He was estimated as the honest and brave ruler, choosing righteous officials to high posts. In 340 he moved the capital to Shengle (near modern Horinger county of Hohhot, Inner Mongolia). When he was poisoned by enemies Tuoba people lost their state for a period and only his grandson Tuoba Gui would re-establish the Tuoba state and go on to found the Northern Wei Dynasty.

According to an ancient. Chinese legend, the last king of Xia state died in exile and his son Shunwei took his family, children, relatives, and people and run towards the north, then settle in the actual Mongolian steppe, got used to nomadic husbandry and remained there, saying that he became an ancient ancestor of Xiongnu and Mongols. Shunwei and some of his people came to Mongolia and mixed among Xianyun, Xunyu, and Guifang people, but the position of few Chinese immigrated to warrior nomadic tribes was not powerful. Nomadic tribal states of Mongolia mentioned repeatedly in Chinese records had their own nobility and leaders and it is impossible for a migrant from other countries to become their leader and even ancestors of rulers of Xiongnu.

Xiongnu period fortified settlement in Mongolia. This fortress ruin is located in the valley of the Orkhon River tributary – Shuvuutain River on the north coast, Buregkhangai soum, Bulgan aimag. Kh.Perlee made measurements and a sketch plan in 1954. The fortress wall was built with rammed earth. There is in the center of the fortress a remain of a mounded big construction. From this mound to the north gate identified paved ground isthmus likely remains of some buildings. Size of the fortress: the south side is 225 m, the north side is 265 m, the west side is 193 m, and the east side is 187 m long. The big mound located in the center is 30×40 m and the ground isthmus is 8×19 m. There are four gates and the internal organization of this fortress is signs like Tereljiin Durvuljin attributable to the Xiongnu period.

It is obvious that the nomadic empires and settled states of Eastern Asia had been fought regularly for all their history to control the main commercial route of historical times the Silk Road. The control of the Silk Road delivered not only trading profit, but also commercial tax and customs revenues. Despite these economic profits the evident political and strategies were emphasized by the counterparts from the control of Silk Road. This major trade road was important for Xiongnu and they have conducted a wide range of military and diplomatic policies to control it.

During the struggle between Han Wudi and Xiongnu at the end of 2nd c. BCE to the first quarter of 1st c. BCE, the Han court paid special attention to investigating Western region small states and elaborated on the strategy of how to engage with these countries and force to Xiongnu from the west side. As a result of these diplomatic and military activities, the Silk Road was opened in his proper sense. General Chang Qian of the Han Dynasty played an important role in this objective. 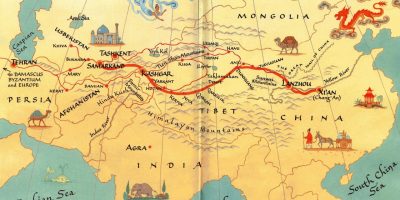 He discovered the route into Middle Asia with the purpose of investigating this region and find famous battle horses. While the Han Dynasty broke down in 3rd c. CE, the role of Silk Road falling much, but revived quickly and became more intensively than before.

There were 2 basic branches of the Silk Road. The north road started from Chang’an capital city of the Han Dynasty, pass through the Gangsu corridor to the northwest, and divided into 3 branches. Two branches gone along with north and south edges of Taklimakan desert and meet near Kashgar, another branch was passed in the north of Tianshan mountain along with Hami and Turfan and reach Fergana valley. These 3 branches were continued to the west by the north and south road and meet in Merv city. The south road was along with Karakorum range, passed through present Pakistan territory, and reach Iran and Iraq.

The one branch in the north of Tianshan mountain was an important road for Xiongnu because it was the source to find agricultural and handicraft products. Indeed, it was the only possible branch of the Silk road to control it easily. Once Mongolian historian G.Sukhbaatar said: “One of the major foreign policy of Xiongnu was to keep their authority on Silk road and take taxes and tributes from these western region countries”. The aim of this policy not only limited by the tribute, it was proposed to take shares from the Silk Road transportation incomes. It is common to consider that this northernmost branch of the road had lesser natural barriers than others, but Chinese tradesmen opened more side-way south two branches in order to be safe from nomads or Xiongnu influence. The key strategy of the Xiongnu policy for western region countries was to consent and control their own authority, without changing local governors. Xiongnu was struggled since Maodun Chanyu with Yuezhi and achieved success during the Laoshang Chanyu period. During this period, Yuezhi pushed away to the south and their native land in actual Gansu, Qinghai, came into Xiongnu control. moreover, the major nomadic nations of the Western region, as Kangju and Wusun were under the Xiongnu rule.

According to historical sources, General Cheng Tang of the Han Dynasty was said that “Western region countries indigenously ruled by Xiongnu”. After major competitors, Yuezhi migrated to the far western lands, and the most influential Kangju and Wusun followed Xiongnu, all small oasis cities or countries came under the Xiongnu control in 2nd c. BCE, and dominated until 1st c. CE. after that, the interest and aggression of the Han Dynasty to the west continuously increased, and these 2 biggest nations’ struggle for this strategically important region continued for a long time. For example, in 151 BCE, Huyang Wang Yiwu of Xiongnu attacked Kumul, General Sima Maokai of the Han Dynasty battled against him and defeated him near Pulei Lake.

The Western and Southern goods entered through Silk Road transportation in Mongolia have been discovered in Xiongnu elite tombs. Moreover, rare goods from Egypt and Greek-Bactrian style have been still found from Xiongnu common burial were probably entered by Silk Road.