The issue of the armed revolt was presented to the Political Bureau of the Soviet Bolshevik Revolutionary Party (BHK) by the end of May. By that time it had already spread more or less throughout the whole of Mongolia.

After discussing the situation in detail, the Politburo decided to make a temporary Lenin-style concession. On June 10, a decision to change the direction of the Mongolian policy was issued during the 104th session of the Political Bureau of the BHK(b)N.

Stalin planned to build a new Mongolia in 1932 within a short period of time. First of all, he planned to acknowledge defeat and conduct a Mongolia New Economic Policy (NEP) to calm people down and buy time. In time, he would find and inaugurate a “Mongolian Stalin”, enlarge the secret police, infiltrate every cell of the society and create a terror machine and finally organize a massacre involving the whole society and particularly destroying all monastics who were against the new society. These plans can be seen in the notes of his five meetings with Genden, seven meetings with Choibalsan, one meeting with Amar, four meetings with Tsedenbal, and in other official and unofficial documents.

On June 29-30, 1932, a joint Third Congress of the MPRP Central Committee and Interrogation Central Committee was held in Ulaanbaatar. A joint resolution of the BHK(b)N Central Committee and Comintern was received by the Mongolians. The letter was brought to Mongolia by Stalin’s fellow Georgian, Eslava, who was the Deputy Commissar for People’s Trade, and a member of the Politburo. The letter said: “Considering the economic and national peculiarities of the MPR, that is the existence of the revolutionary arat’s wealthy class, the plenary meeting criticized replicating exactly the policies of economic and political development of the Soviet government, and has considered it necessary to support and develop ordinary economic household initiatives, to develop private animal caravan transport, and to combat religious beliefs and strengthen the country’s defense force”. 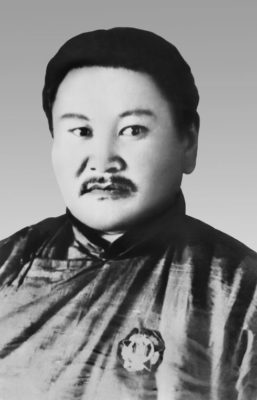 Genden who officially was registered as Butachiin Genden, in 1932 filled in a questionnaire without fear under the name of Pejidiin Genden, the name of his uncle, the Tsorj Lama. Despite the fact that Genden had worked for almost ten years in the upper echelons of authority, he matured as a politician only when he became the Prime Minister. Since the time of the Bogd Javzandamba, Genden was perhaps the first true leader in Mongolia. For one thing, Genden seemed to be the exact person Stalin was looking for, a “Mongolian Stalin”, and for another, his rise was closely related connected with his maturity as a politician. Genden was a very clever man and had outstanding qualities that helped him to attract and lead people.

But Stalin and Denden never understood each other well. Upon meeting the new Prime Minister in 1932, Stalin thought Genden would build communism in his country by following his every order. As a reward, Genden would be given permission to rule over the “feudal” in his country with absolute power. Genden from the bottom of his heart trusted Stalin’s New reform Policy as the will of Lenin and Buddha, in both of whom he sincerely believed. In 1924, the year Lenin died, Genden officially declared, “On earth there were two great geniuses-Buddha and Lenin”.

In 1933 Genden openly declared his desire “not to fight with religion”. Genden stopped hiding his religious beliefs, he set free monks who had been arrested on false accusation, and he forbade the arrest of monks who were maintaining a relationship with the Panchen Bogd.

When the cases of thirty-nine leaders of the 1932 revolt were heard at the court the next year, sic offenders were freed and fifteen were imprisoned, which for the Stalinist era, was a surprisingly light penalty for people who organized an armed uprising. In reality, this was a true example of the “New Reform Policy”.