The Abolition of Autonomy

Mongulai
Jul 30, 2019 History of the Mongols, Movement Towards Independence 0 Comment

Xu Shuzeng was not satisfied with the abolition of autonomy. In order to immortalize his feat, he planned a show to commemorate the event.

The Act Which Sparked Fire of Revenge

A ceremony marking the abolition of the autonomy of Outer Mongolia was organized for January 1920. Soldiers lined either side of the road in front of the Hutagt’s palace. Xu himself arrived in a car and, after entering the palace, placed the portrait of the President of China in the center of the hall. The five-colored standard of the Chinese Republic followed, accompanied by a marching band of cymbals and drums. The Bogd Javzandamba and other Mongolian officials were obliged to prostrate themselves repeatedly before the portrait of the Chinese President. Xu was bloated with pride and was fully bent on insulting the Mongols, which naturally incensed them. The next day the Mongolian army was demobilized and its arsenal seized. All but sixty of the guards, who were to protect the Bogd Khan’s palace, were demobilized, and 5,778 rifles, 2,456 guns, seven cannons, and 2,608 swords were seized from the Mongolian army.

Higher-ranking people with aristocratic backgrounds formed duguilans, or cabals. For example, Gung Gombo-Idshin, Hatanbaatar Magsarjav, the Da Lam Puntsagdorj, and the Jalhanz Hutagt Damdinbazar formed their own duguilan and had asked for assistance from the United States. When the Jalhanz Hutagt went to Beijing he passed on the message from the Bogd to the ES Embassy there. The archives in Irkutsk contain a letter from the Kolchak government.

Under the circumstances, the Mongols had to seek foreign assistance, Some sought help from the Consul-General Orlov, others sought assistance from the Japanese general in Huree, Matsui, and still, others turned to the ES Embassy in Beijing. Neither the Kolchak government nor the governments of Japan or the United States, was concerned for Mongolia, while the entire world was in turmoil. This way a tragedy for the Mongols alone and its slipped by unnoticed. In November 1919 US Consul Charles Tenny received a letter from the Bogd who had asked the US government to open its Consular Office in Huree, emphasizing that the sooner it opened, the faster political and commercial cooperation would grow. The Bogd also mentioned that the letter had been sent secretly without notifying the Russian and Chinese governments. The messenger, Jalhanz Hutagt Damddibazar, met with Consul Tenny in the first official meeting in the history of Mongolian-US relations.

In April 1920, the United States Consul-General Eberhard visited Huree on a fact-finding mission. Although Huree was being terrorized by Xu Shuzeng’s soldiers, Eberhard left after having just a one-hour meeting with the Jalhanz Hutagt, held in total secrecy. A well-respected Swedish merchant and missionary in Huree named Larson, who was informally known as the “Peter John” of the twentieth century, acted as their interpreter. Since the political situation in Mongolia had become an extremely complicated game between Russia, China and Japan, Eberhard suggested that Washington open a Consular Office in Huree rather than in Kalgan. The State Department contended that the opening of a Consular Office either in Kalgan or Huree was the same since they were both on Chinese territory. 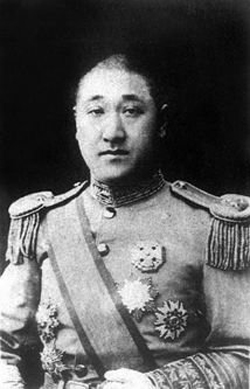 Xu Shuzeng was Duan Qirui’s chief adviser. He was a “mad but brilliant” adventurer who fullied one of the most important duties in the political life of China. Xu, born in 1880, made several futile attempts to attend school before eventually meeting with Duan Qirui and becoming one of his most trusted aides. He spent two years studying in Japan to become an infantry expert. He played an active role in the arguments between President Li and Duan Qirui and engineered Li’s resignation. For a brief period, he serves at the War Ministry and in early 1918 he became a deputy to Zhang Zuoling in Mukden. He was one of the initiators and key leaders of the Anfu clique.

Seven months earlier, on April 1919, Xu had submitted to the government a visionary plan for the social and economic reconstruction of the Mongolian frontier. He proposed an ambitious program of railroad construction, land reclamation and cultivation, mining, and banking. The program envisioned nothing less than the total unification of Mongolia, but China, whose state coffers had been exhausted, lacked the major financing needed for this project. It seems “Little Xu” carried in his heart a desire to make the impossible happen. He immediately turned his attention to the task of implementing an ambitious program of development for Outer Mongolia. His eight-point program became the charter of the promised reformation of Mongolia, which included increasing the population, developing animal husbandry, land reclamation, industry and farming, culture and education, and improving the administrative system. The ministries were replaced by eight new departments and the previous military ranks of the Mongols were banned. Soon after his arrival in Huree his relationship with Chen Yi further soured and their conflicts worsened. At least, the general defeated the old envoy, arrested him and deported him to Beijing.