The Collapse of the Qing Dynasty

Mongulai
Jun 25, 2019 History of the Mongols, The Last Days of The Qing Dynasty 0 Comment

Sun Yat-Sen, in protest against the Manchu rulers, cut short his long hair. The most important goal of “Sun Yatsenism” was to drive out the Manchu, the barbarians from the north, and revive Chinese statehood; the Chinese revolutionaries were not interested in the kind of state China would have after driving the Manchu out. As a popular slogan said, “let’s tear down the Manchu Qing Dynasty and revive the Ming Dynasty of China.” In other words, let China be ruled by the Chinese themselves.

The Revolution of Xinhai

The revolution of Xinhai, as the Chinese call the revolution in the year of the Pig, began in the south Chinese city of Wuchang on October 10, 1311. A revolutionary government formed there and Nanjing was occupied on December 2. The widely supported revolution spread like wildfire and soon after China was divided into two parts, the revolutionary south, and the northern monarchy. On January 1, 1912, the Republic of China was established with Nanjing as its capital, and its first President, Sun Yat-sen, assumed office with a twenty-one-gun salute. The period of Xuantong, the last of the Qing Dynasty, was declared over and replaced by the 4,609th year of the Huangdi, the legendary Chinese ruler. An equitable republic of Chinese, Mongols, Manchu, Tibetans, and Uighurs was proclaimed, and a five-color flag, representing these five nationalities, was hoisted. In this way, one of the longest surviving monarchies in the world came to an end.

The Manchu were a nomadic barbarian tribe who in the past lived in the northeastern plains… The Manchu, taking advantage of the anarchy following the civil war at the close of the Ming Dynasty, occupied Beijing… The opposition of the Chinese people against alien enslavement was suppressed through the massacre of millions of civilians and children. The Manchu forced their own customs on the Chinese and executed thousands upon thousands of Chinese who refused to grow their hair long…

From book Solving the Chinese

Both sides were aware that civil war was inevitable if the revolutionary south and the northern monarchy failed to reach an understanding. The northerners were prepared to transform their country into a republic, provided that the new state was ruled by “one of their own”. Their candidate was Yuan Shikai, a military commander. The Empress Dowager and the Emperor Guangxu had both died on the same day three years earlier. The newly enthroned toddler, Pu Yi, his father Chun and other Manchu leaders were unable to resist Sun Yat-sen’s revolution and turned to Yuan Shikai, who had been waiting for this moment since the death of the Empress Dowager. Yuan, who received the authority to conclude the Nanjing-Beijing Treaty, became President of the Republic of China on March 10, 1912. Thus the Manchu Qing Dynasty, which ruled for 297 years, and the 4000-year monarchy in China came to an end. China became a republic with its own constitution, and the exclusive rights of the Manchu disappeared. In the same way, the status of the Mongols also disappeared.

The purpose of the Chinese revolutionaries was to banish the “barbaric northern Hu”. They celebrated the victory of the Xinhai revolution on the grave of the Ming Dynasty. However, the next day, they decided to declare ownership to the country, thus uniting the “northern groups’.

Mongolia became merely a province of the Republic of China. But the Mongols had also been waiting for this moment and during the commotion of the Xinhai revolution, they proclaimed their country’s independence. They claimed that Mongolia was now free, and the Chinese were not successors to the Manchus. And this is why, both Mongolia and China are newly liberated nations.

Sun Yat-sen’s Theory About on China 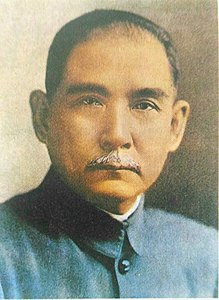 By the beginning of the 20th century, Sun Yat-Sen was teaching the idea of establishing a Han national republic. After the revolution, however, he would talk about a five-nation republic. The idea was to have of the 50 nations coexisting as one republic. These five were China, Mongolia, Tibet, Manchuria, and Hoton. The flag would consist of five colors representing the five nations.

During his first lecture, he said, “There are 400 million Chinese people. In addition, there are only a few Mongolians, a million Manchus, a few million Tibetans, and only a few hundred thousand Muslim Turks. There are barely 10 million foreign nationalities. So the 400 million Han is basically Chinese. They have the same blood, language, religion, interests, and customs”. When 95% of a population consists of one nation, it is considered a sole nation. Sun thought that, since foreign nationalities made up only 2.5% of a population China was a sole nation-state.