The Foundation of the Tengrism

Tengrism is considered that its foundation dates back to a period many thousands of years ago, that is, to the era of primitive systems. However, there remain a variety of different opinions concerning precisely when and where the religion originated.

Ch. Dalay, in his Brief History of Mongolian Shaman Worship, considered, “Religious beliefs had been founded in prehistoric considered, primitive ages… but Shaman religion appeared relatively late…” S.Badamhatan, in his life Review of the Hovsgol Reindeer Herdsmen, wrote, “Shaman worship has its origins in the Patriarchal ages of the Old Stone Age on the basis of its previous belief of Magi, Totem and Fetishism.” [35: 37] In another work, the Darhad tribe in Hovsgol, he considered, “Historically, the main conditions and causes for the emergence of Tengrism were the segregation of richer and poorer social strata and the increasing authority of tribal chieftains and elites. This took place when society started to make tools from bronze and iron, which reinforced the male’s dominant role in society and allowed for the emergence of private property as a result of an increase in production capacity during the first primitive ages of that period.” [4: 230] Accordingly, one might consider that Mongolian Tengrism grew out of loss-developed pro-existence beliefs during an epoch when society became stratified and a tribal aristocracy emerged.

However, H.Buyanbat in The Argument of the Mongolian Shaman Religion considered that “Tengrism came into existence during the Matriarchal stages of prehistory. That period, commencing during the prehistoric Matriarchy and ending with the establishment of the slave-owning system, saw the foundation, formation, and establishment of Tengrism…” [6:92] Similarly, D.Surbadrah, in an appendix to The Cardinal Organization of the Mongolian Nation, observed, “Shamanist worship originated in the distant past and, during the Matriarchal period, became both developed and sophisticated.” [27:374] D.Mansan expressed his concurrence with B.renchin’s conclusion that Shamanism originated in the Stone Age in his Mongolian Shaman Worship. Moreover, Mr.Yonsog |A Chinese Scholar| in his Review of the Mongolian Religions wrote, “Magical curative invocations and totems were the first forms of human religious belief… religious ideas and consciousness have evolved gradually in Mongolian territory since the middle of the Paleolithic period. It is certain that curative invocations had emerged as an initial form of the religious ideology by the end of the Paleolithic era.” [7: 33, 35]

Mongolian Scholars have led the field for the last forty years in seeking to determine with greater certainty when the Shamanist religion was founded. At the first, they considered that its origin was connected with the Patriarchy of the primary primeval ages and, only later, concluded that its foundation during the Matriarchy was expressed by the late V.Diosegy |Hungary|, who concluded: “It seems that the first Shamans were women because Mongols of the thirteenth century made the effigy of an Ongon called “Emgelj” out of felt, on which was attached a felt thing similar to a woman’s breast, and they prayed to it as the representation of their own holy talisman”; On the chest of a Shaman gown there are representations of two breasts, between which are tied white and red Manjigs symbolizing maternal milk and blood, and the male Shamans from Chukot have been able to accomplish all kinds of female actions.” [46;14] However, he reached this conclusion during studies carried out among the Mongolian Shamans of the Huular and Darhad tribes in comparison to the Shamans of Tuva, Karagas, Nanay, Siberia, and the Far East, where he had worked previously. At the time, a fable circulated among the Mongolian Shaman believers about the so-called “Ohii Buural Eej” or Famous Grandmother.

A citizen of the third Bag |Religion|, Renchinlhumbe Soum |District|, Hovsgol Aimag |Province|, son of a so-called “Aman” |Garrulous| shaman Shagdar of white Huular tribe. Mr.Gombo told me in 1960: In ancient times the Shamans, during their Shaman rituals, reached the Heavenly kingdom of Sumj Zasan.

That kingdom has only one large mountain named ‘Artsat |Juniper| Sumber’, on which the celestial spirits of our original great Shaman-ancestor stayed. A Heavenly goddess, the Queen Mangar of the “Ohii Buural Eej” leads these spirits |Ongons|. The Great Shamans of ancient times were able to reach the Heavenly kingdom of Sumj Zasam, to climb Artsat Sumber. Once upon a time, she had been a Shaman-woman |udgan| and after her glorification, she was taken up into Heaven, and her spirit was situated in the Heavenly of Sumj Zasan. The last Shaman able to reach Sumj Zasan, to call the Queen Mangar of Ohii Buural Eej and to meet her, was called Burial Udgan, daughter of Jamba Lama. Since her time, no other Shaman could reach there-that is what my father told ma [3; D. 5, pp. 92-94]. 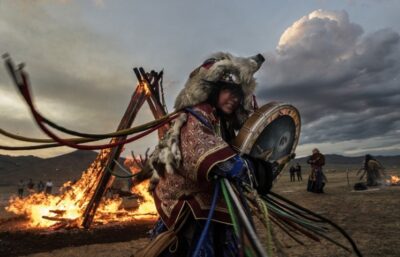 Besides, there is another legend that says: An udgan called Asuyhan, of Oirad Buriad descent, was walking on the Baigal Dalay’s |the Lake Baikal| bench when she saw a growling dark blue bull. The Shamaness was amazed because such a creature should not be there. Therefore, she believed that it was sent to her from the Heavens. As a single woman, she married it and after a few months, she became pregnant and gave birth to two boys. The elder boys were named Buriaday, and the younger one was called Horidday. Buriaday married a girl, who gave birth to two boys named Ehirred had eight and Bulgad six boys; and there was a saying that their father was Buh |bull| King and their mother was Budan |mist of fog| Queen. [32: 126]

These legends indicate that the origin of the Shaman Religion is related to the Holy Saints of the Matriarchal age, that is, a period when some women were given high respect.

However, matriarchs in the Mongolian Shaman religion were not confined to such periods. There are several holy spirits of Shamans originating from later periods such as Aguin Tsagaan Eej |The White Mother of a Cave and a daughter of Chinggis Haan|; Soyod Eej, of whom legend has it that she has left her brightly-colored gown-armor at the Pass of Honi Mailah |Sheep Bleating| near Semipalatinsk; Bilggee Udgan, the so-called “Great Holy One\Thing of Hyar” |who was said to have been sent to earth in an iron cradle|; and Baglan Zargagch |litigious Baglaan| known after her death as “Agaryn Hairhan” |Agar’s Deity|, who started several lawsuits against the Manchurian Empire’s colonial oppression.

Nevertheless, all of the evidence still supports the conclusion made by B.Renchin, S.Badamhatan, H.Buyanbat, D.Surbadrah, and Mr.Yonsog, that the religious beliefs and curative invocations, as the first forms of the Mongolian Shaman Religion, originated at some point around the middle of the conclusions of Mongolian historians and researchers, the Old Stone Age has been established as seven to twelve thousand year ago, and the New Stone Age as between five and seven thousand year ago [33: 4]. Therefore, the foundation of the Mongolian Shamanist Religion may also have emerged during this period between seven and five thousand years ago.

The problems concerning the foundation of Mongolian Shamanism are closely related to the interaction between man and nature. The human capacity for direct physical and mental communication with nature was much greater in pre-tribal society than in the present period of scientific and technological advancement.

During the most basic stages of social development, men have to interact with nature with nothing more than hands and minds; so all kinds of natural obstacles and difficulties were overcome by their physical and mental capacities and in this way, they were subject to natural selection in much the same way as any other species.

This capacity of ancient humans allowed some of them to use their natural abilities and gifts to explain the reasons for phenomena such as sky, earth, sun, moon, stars, and fire. According to their own concepts, they created links between man and nature, which enabled them to live harmoniously.

In this period of limited social development, physical force played a significant role; even more so after the emergence of a tribal society. Later, as knowledge and reasoning developed, those men who possessed greater wisdom became highly respected and appreciated.

During the Matriarchal age, when the Shaman religion made its first appearance, men with such talents became involved in religious activities, and usually, the one with the most influence and authority assumed leadership over his or her tribe. Due to the high social position enjoyed by some women in a Matriarchal society, some women acted as leaders of religious activities. Whether tribal chieftains or not, the women were called “Eduggen”.

Several scholars have explained the main meaning of this denomination since 1846; among them, H.Perlee and H.Buyanbat’s opinions are the most convincing. H. Perlee explained that: “The term “Eduggen” is the name of a female spirit meaning “Origin” and it is evidently related to the relics of the Matriarchal tribal that have existed in Mongolian society at a given period”. [44:5] Buyanbat wrote, “Among the heavenly spirits of Mongolian Shamanism there was one named “Edaga Tengger”. “Edaga”, as a matter of fact, means to a mountain named “Nedu”, which is encountered in the Mongolian folktale of “Daggina Eej” or “The Mother-Princess”. Buyanbat also explains the terms for male Shamans, who were dominant during the Patriarchal period, saying,” Then, as today, they were called Boo and female Shamans were known as Udgan.”

Therefore, the Shamans of some tribes such as Darhad and Huular, who have followed the ancient customs of Mongolian Shamanism to the present day generally, use the term “Boo” for a Shaman. Consequently, their male Shamans are called “Zayran”, “Zairan” or “Zaarin” and the female Shamans called “Udgan.

The term “Zayran Tengger” is also found in the Secret History of Mongolia, which implies that |at least in the thirteenth century| a male Shaman could be called “Zayran Tengger”.

In my opinion, the word “Ud-Han” or “Udgan” might be originated from two words: “Udval” |lat: aquilegia Sibirica| is a beautiful and fagrant flower. A “Han” is as a nice woman. However, from the term “Zaadag Er” |a man who teaches or guides|, can be derived “Zaa-Eren” or “Zayran”.

It may be considered that the Tengrism was founded and developed as a combination of the understanding of “totems” or “sacred Heaven”. This involved worshipping various natural beings and phenomena such as animals, plants, stones, wind, and other beings or forces. It is most likely that these first appeared during a period when the relationship between man and his immediate environment was still very close. Foretellings related to penetration by more advanced minds into the secrets of space and time, while curative invocations were another type of these early customs intended to interact with natural forces. In this way, the Shamans, as the leaders of the religion, were those who could penetrate the mysteries of space and time and reach levels of heightened.

The Shamans take into consideration both good and bad natural and social phenomena, actions and deeds, and into both the affirmative and negative trends of the universe, that is into the unity found by balancing opposing forces. Hence, they imagine the negative forces to be black, dark or shadowy. Positive forces are generally considered to be white or light. Hence, Shamans from ancient times were divided into the two groups or sides known as White Black respectively.