The Return of the Chinese

The Beijing government-appointed High Commissioner Chen Yi arrived in Huree in October 1915, four months after the Kyakhta treaty was signed. The treaty had made an important but unwelcome concession to Chinese suzerainty over Mongolia by allowing the Beijing government to appoint a High Commissioner to Huree and Deputy High Commissioners to Uliastai, Hovd, and Kyakhta, “to exercise general control lest the acts of the Autonomous Government of Outer Mongolia and its subordinate authorities may impair the suzerain rights and interests of China and her subjects in Autonomous Mongolia.” The officials were forbidden, however, to interfere in the internal administration of Outer Mongolia.

Together with the commissioners came Chinese troops. According to the Tripartite Treaty, the High Commission in Huree was allowed 150 guards, while each of the regional Deputy High Commissions was allowed fifty. The Chinese, long annoyed by Mongolia’s “autonomy,” instructed their resident officials in Mongolia to salvage what they could during the political scramble.

Cautious of the Bolsheviks

Although for a time the issue of Mongolia had receded into the background of Chinese politics in the fact of the face of more pressing domestic problems, the 1917 February Revolution and civil war in Asiatic Russia catapulted the Chinese frontier question into the foreground and gave it new urgency. The seizure of power by the Bolsheviks brought disorder, civil war, foreign intervention and a host of different political voices, each claiming to be the authentic voice of the Russian people.

With regard to Outer Mongolia, the coming of the Bolsheviks to Siberia was obnoxious and disturbing to Chinese diplomats in Mongolia, and especially to Zhang Zhidong, the Deputy High Commissioner in Kyakhta, who urged his government to send reinforcements to this major crossroads. But China’s freedom of action was dictated by the Kyakhta treaty. The Chinese Foreign Ministry then hit upon a strategy which, it was hoped, would both pacify the Allies and strengthen China’s position in Mongolia.

On February 14 Chen Yi, the High Commissioner in Huree, was instructed to inquire of the Mongolian government how it might resist a Bolshevik invasion and to suggest that the Mongols formally request that China increase its troops in Mongolia until the “disturbances” had quietened down. Without waiting for a reply, Beijing decided to apply even stronger pressure. Four days later the High Commissioner warned the Mongols that unless they were prepared to accept responsibility for the safety of the Deputy High Commissioner and the Russo-Asiatic Bank in Kyakhta, they must request Chinese troops. Chen Yi was instructed to add that such a request would not violate the 1915 Kyakhta Tripartite Treaty. Beijing probably hoped that a “spontaneous” Mongolian appeal for Chines reinforcements would create a sufficiently ambiguous legal situation so as to blunt foreign criticism. 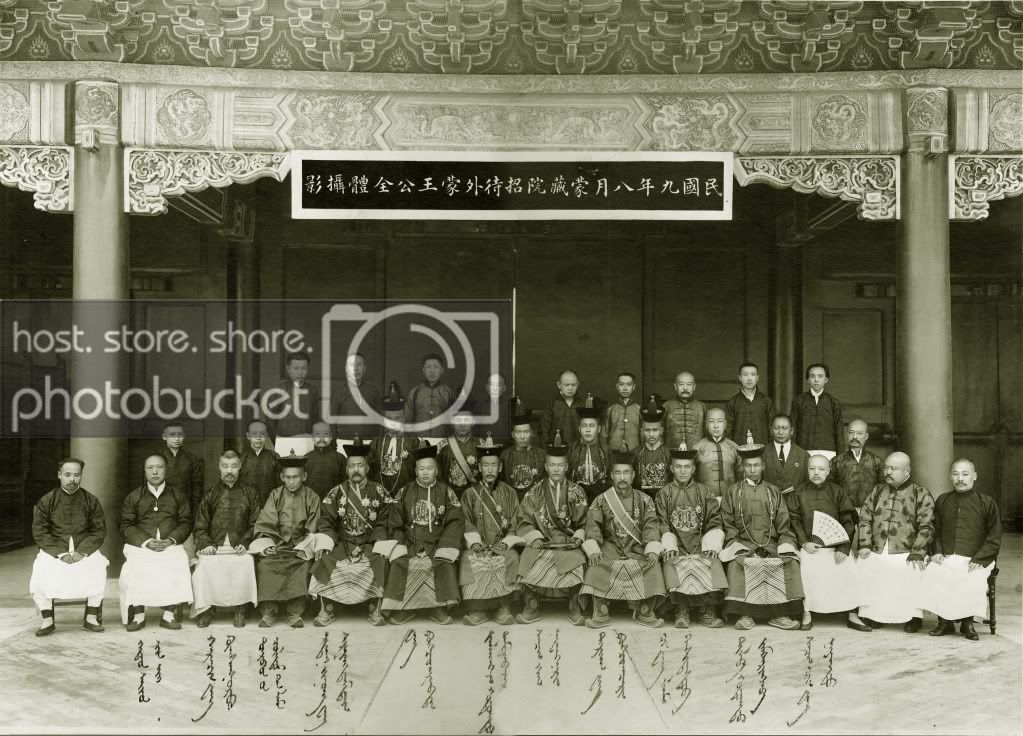 The End of Chen Yi

The creation of Pan-Mongolia became a fine pretext for Chen Yi to seek the abolition of Mongolian autonomy. He himself drafted a lengthy bill called, “Chinese Government Bill for Outer Mongolia: Improving the Lot of Future Generations after the Abolition of the Autonomy of Outer Mongolia,” and began talks with the government officials of Outer Mongolia. First, he met with the Foreign minister Tserendorj. He demanded that the Mongols hand him a petition seeking the voluntary abolition of their autonomy, lest tragedy befalls them. Tserendoij answered that he would take up the matter with Prime Minister Namnansiiren and the Bogd Khan.

Not long afterwards Namniisuren fell seriously ill and passed away, and Badamdorj became Prime Minister. Badamdorj was the first man to accept Chen Yi’s sixty-four articles. Chen Yi knew that the Mongols liked taking bribes, but the Mongols were probably trying to defer the impending threat. Article sixty of the Understanding states that” according to the Tripartite Chinese-Russian-Mongolia treaty…as Outer Mongolia itself requested The abolition of its autonomy, it should be abolished…”. In return, the Bogd Khan was promised 37,000 silver lan every year in addition to the new title of Bogd Javzandamba Hutagt Khan: the Benefactor of Outer Mongolia, while the Eh Dagina was also promised with gifts and given the rather curious title of “Intelligent, Pure, Wise and Clever Goddess of Outer Mongolia. ” However, the new agreement still banned the settlement of Chinese nationals in Mongolia, something about which the Mongols had always harbored reservations.

End of the Mongolian Autonomy

By the end of October 1919, the Chinese government was poised to cancel autonomy despite the opposition of the Hutagt’s court. In the summer of 1919, China sent many troops into Outer Mongolia. This was a violation of the Tripartite Treaty and although the Omsk government sent several protest notes through its ambassador to Beijing, Kudashev, the Chinese replied that the troops were intended to oppose the Bolsheviks. Three regiments led by a certain Li Yuan set up a garrison in the northern border of Kyakhta.

In early November 1919, Xu Shuzeng arrived in Huree leading three infantry divisions. The general,  who was eager to seize from Chen Yi, the glory for having abolished Mongolian autonomy, met with the Bogd Khan and demanded that the government immediately pass a resolution voluntarily abolishing the autonomy of Outer Mongolia.

Finally, the Mongols caved in to the pressure; they wrote the petition as urged by Xu, and five ministers decided to sign the sixty-four article treaty. General Xu immediately informed Beijing of his feat and a Chinese presidential mandate was issued on November 22, 1919, nullifying the 1915 Tripartite Treaty. The usage of such terms as “Khan’s ordinance” and “Mongolia” in official documents was prohibited, the gains of the 1911 National Liberation Revolution gradually decreased, and so the capitulation was complete.