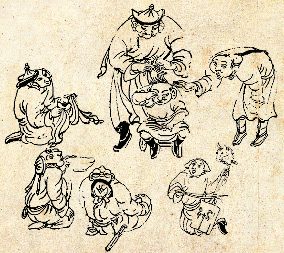 Although the custom of celebrating the cutting of the child’s hair for the first time is named differently among the Mongols, such as khüükhdiin üs avakh (cutting the child’s hair) or örövlög ürgeekh (clipping the child’s crest), the main content is the same. The custom is practiced for boys when they are at age 3 or 5, and for girls at age 2 or 4. This is due to the Mongols’ traditional belief in odd numbers as arga (method) and even numbers as bilig (wisdom). The celebration of the custom of cutting the child’s hair for the first time is celebrated the same as other customary celebrations, that is, by preparing various plates and dishes of tsagaalga (dairy products), meat, and traditional beverages. It is a custom that every guest gets a taste of the tsagaalga and every child gets a full cup of the tsagaalga.

Relatives and close friends of the parents participate in the celebration of this customary event. Among the Khalkh, Dörvöd, Bayad, Myangad and Khotgoid ethnic groups of Mongolia, the grandfather, father or a respected and elder participant, and (among Buriad ethnic groups) the midwife, first touches the hair of the child with a knife or pair of scissors. When the steward of the ceremony says “Let’s start to cut the hair of our son (or daughter),” the most respected person sitting at the northwest first touches the head of the child with a wooden knife. Afterwards, the most senior person one cuts the hair with scissors and wraps a bit of the hair with a khadag (sacred scarf). The child is given a taste of milk from a cup and then a bit of the milk is applied to the forehead. The same person gives a benediction. Thus, while the child goes around the guests from right to left, the guests cut off pieces of hair. The mother of the child collects and wraps the cut-off hair in a khadag. During the cutting of the child’s hair, every guest gives a present to the child, giving well-wishing words, such as:

Be kind to your father

Be helpful to your mother

Be meritorious for your country

Be the foremost citizen among the people

In such a manner, these words are the expression of the Mongolian aspirations.

When we cut the child’s hair for the first time, we leave a tuft of hair on the forehead of the boy and two tufts of hair on the temples of the girl’s head. According to tradition, those tufts of hair symbolize the wish that the boy become the head of a family and that the girl become a wife of a family. This tuft of hair on the forehead can grow until the boy’s mature-age. When the boy reaches maturity he can wear a braid. The tuft of hair on the temples can grow until the girl reaches maturity, after which she can wear pig-tails before her marriage. In recent tradition, the hair of a girl is not cut entirely, instead only a piece is cut just for the custom. 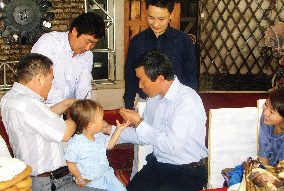 Following the completion of the cutting the child’s hair, the ceremonial event of the custom takes place by offering various dishes and plates to the guests. There is a tradition that, if possible, the hosts arrange a small festival including a wrestling match among children and a race of two-year-old colts. The custom is often celebrated at an age when the child has the ability to sense that the celebration is being held especially for him or her. Therefore, the poem of benediction for the ‘child’s ablution’ are mostly intended for the child’s parents, while the poem of benediction for the ‘cutting of the child’s hair for the first time’ are intended for the child. For instance, the following benediction is told:

It is an honour for me

To spread this delicate honourable scarf

By the wholesome dairy products

Before all of you who are feasting;

It is a reasonable feast

On the occasion of cutting

The hair of This darling child

The minstrel explains the cause of reciting the benediction on the occasion of child’s hair cutting and continues: Your parents make the steel white scissors

To open the blades of the gold-gilded scissors

Is safe for a child’s life;

open the blades of the silver-cased scissors

Is safe for a child’s eternity;

To everybody and cut the child’s hair;

Let’s help in the accumulation of goodness

To elongate the child’s life more;

The cutting of the child’s hair with respect is thus explained.