The art of whistling covers skills of melodious whistling, which is different from ordinary whistling. The Mongolian art of whistling calls for the mouth cavity to function as a soundbox. Whistling art is an artistic phenomenon that has developed as a result of long, deliberate, and zealous effort. It is melodious and artistic when Mongolians delightfully whistle graceful and touching melodies, including those from long and short-songs, in different contexts, such as in the pasture, while working, and while galloping on the back of a horse on a sunny and bright day.

On the other hand, there are several contexts in which whistling is permitted. Mongolians whistle as an intellectual need when they want to feel calm and tranquil, when they want to have a breeze on a sultry day, or when threshing crops to blow away the husks (chaffs). Also, Mongolians whistle when watering horses and livestock, as doing so works to make the animals calm and tranquil while drinking water.

Whistling is classified into the following three types: tooth whistle, lip whistle, and palate whistle. Gifted people who possess whistling art with a high degree of skill are found in different localities in Mongolia, and the prominent whistler’s fame lasts for decades.

One kind of art related to the vocal organ is the playing of the bamboo Jew’s harp. This instrument is made of bamboo; Jew’s harps are also made of metal or bone. We whittle bamboo or bone and make two small holes through the two ends of the whittled bamboo and furnish them with strings. A “tongue” is chip-carved on the main body of the whittled bamboo. To play a bamboo Jew’s harp, the player pinches one side of the instrument between his thumb and the finger of his left hand and places the instrument between the player’s lips. He then pulls the string of the instrument to get its “tongue” to vibrate. The player adjusts the pitches by narrowing and widening his mouth-cavity.

Besides being played to accompany traditional short songs, the bamboo Jew’s harp is used for playing short melodies with special dedications, such as imitating mare camel’s calls or camel trotting. Traditionally, the bamboo Jew’s harp is played by mostly women and young girls, whereas the jaw harp is specifically used as a tool-literally, as a means of transportation for shamans and their ancestral spirits. The jaw harp is played at the beginning and end of the shamanistic ritual of the Darkhad, Tsaatan, and Khotgoid ethnic groups in northern Mongolia. 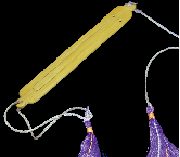