The Mongolian traditional costume /deel/ (robe) is one of the simplest and most distinctive cultural features of the Mongol people. This and other forms of national clothing are well designed for the demanding Mongolian climate and environment and the unique nomadic ways of life, social values, and customs that the Mongolian people have followed for centuries. Each of the many different ethnic groups of Mongolia has clothing with characteristic designs and styles that express their own symbolic meanings. The Mongolian hat, deel, belt and boots each have their general symbolic meanings: The hat symbolizes rising power. The Mongolian hat symbolizes prosperity and ascent; its pointed top symbolizes sincerity and honesty. The deel symbolizes equal power. The deel symbolizes the smoothness and straightness of human body, while represents the meaning of equality.The belt symbolizes successful power. The belt symbolizes the consolidation and reinforcement of any disintegrated things. The vest symbolizes sovereign power. The vest is worn compulsorily during state ceremonial events, affirming that the wearer is a state citizen. It is, thus, considered to be a state costume. The boots symbolize supporting power. As boots are worn on the feet, the “base of the pillar” of the human body, they symbolize strong stability and support.

at is a primary representation of one’s social sta tus and is the most respected of the traditional – clothing items. The toortsog, loovuuz, and four-lugged shovgor hats are a few of the more than 200 different kinds of hats used by the Mongolians in accordance with various customs. Hats are classified by the season as well as the wearer’s age and gender. And hats are also classified by the shape and design of their top, such as the “skullcap,” “helmet,” and “flag.” Generally, the Mongolian hat has a pointed or domed top with red tassels, and a downward line of stitches resembling rays of the sun, which can vary in number and other features by ethnic group. The hat symbolizes eternal prosperity of Mongolia in the world. Various furs and skins are sometimes attached to different parts of Mongolian hats depending on their purpose and style. 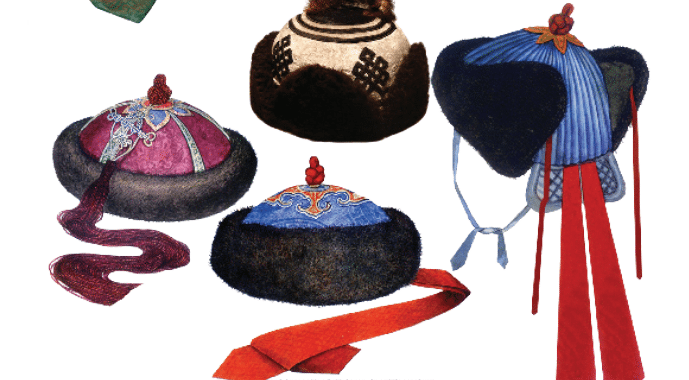 They can be affixed on both sides. It is the main costume of deel is a long gown with diagonal or square lapels that the Mongol nations and it has lost neither its fundamental design nor style even after centuries of use. The ancientness of the design of the deel is suggested by the appearance of pre-historic people wearing sheep skin coats in ancient petroglyphs. 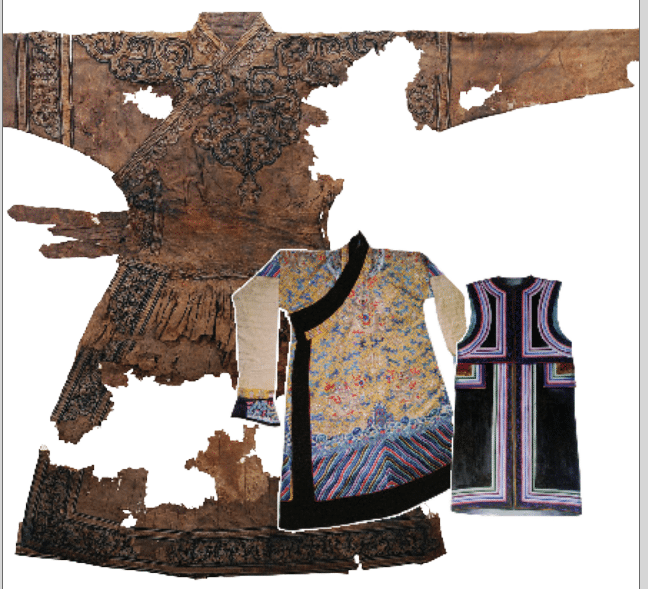 The Mongolian traditional costume has developed to be compatible with the health, physiological characteristics, and daily life of the pastoral nomads of Mongolia. This garment is also uniquely suited to the harsh weather condition to which the Mongolian lifestyle has adapted. The accessories to the deel also serve many purposes: the long cuff at the end of the sleeves can be used as a glove or liner and the wide belt worn with the deel is designed for protection against kidney disease and back aches, while also serving as a blanket or pillow on long journeys.

Our ancestors believed that the spirit of each Mongolian resides in his or her hat, belt or sash, and – khet or traditional lighter. The belt represents one’s social status and wealth. There are a variety of belts found in Mongolia, including belts that are knitted and others that are made from cloth, leather, hide, and even silver and gold. Aristocrats of the nomadic pastoral peoples of the past would use belts made of various precious metals, on which delicate ornaments would be engraved and gemstones inlaid. This kind of belt was called an agsargan büs. It also had metal decorations from which the wearer would hang their sword, knife, and bow case. There was an ancient tradition that Mongolian men when they established a friendship with another, would exchange their belts as a wish for continuous peace and unity with one another. It is said that aristocrats of the past would also engrave three, five, seven, or nine dragons on their gold or silver belts as a sign of reverence to this mythic beast.

The Mongolians have long been making and wearing boots, known around the world as Mongol gutal- with their distinctive leather bootlegs, hide soles, and

upturned tips attached with tanned leather. As there are about twenty different ethnic groups in Mongolia, each displaying and expressing a diverse intangible heritage through their costumes, customs and ways of life, it is obvious that the Mongolian boots will vary considerably in terms of types and designs. For instance, there are Khalkh Mongol gutal, Buriad gutal, Oirad goson, Tsarag, and Tookuu, each of which is somewhat different in terms of its design. Mongolian boots are named for the number of the ornaments on it, starting mostly from eight and extending up to thirty-two. The upturned tips of the Mongolian boots reflect the Mongolian wish to “do no harm to nature.” The boots of kings and queens, noblemen and noblewomen, and high-ranking monks were made with
beautifully stitched or embossed ornaments. The tops of the Mongolian boot stockings are traditionally made using the satin stitch. They also often make use of the chain stitch and a shagreen-welt insertion and are ornamented with figures of animals that symbolize protection and preservation.

Accessories of the Mongolian Traditional Costume

Accessories of Mongolian traditional costumes are made from a variety
of precious metals and gemstones. The main accessories that have traditionally hung from a man’s belt includes a khet tsakhiur (a traditional lighter with flint), a knife and decorated knife case, a cup, and a pouch with a snuff bottle and stuff. Women of all ethnic groups, except for the Myangad and Buriad, traditionally do not wear belt accessories. Mongolian artisans use a variety of methods to make costume accessories, including steel engraving, tempering,
quenching, inlaying, and decorating with gold and silver. 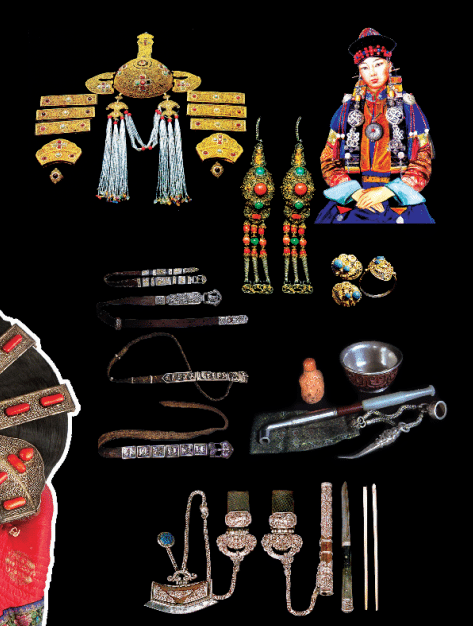