Mongolians pay attention to all measurements in detail. There is a saying that one must measure seven times but cut once.

The measurement of time

The maximum of the time for Mongolians is the jaran or units. There are also approximations of time. The calculation epoch. The next is the year (identified by the mouse, of the time of day or night is connected with the motions of  ox, tiger, rabbit, dragon, snake, horse, sheep, ape, hen, dog and boar). The smallest measurement of the time of Mongolians is the breath. In our ancient calendar, the division of 24 particles or 60 chinlüür is important; each is divided into 6 breathes; the breath is divided into 707 dense; the measurement of time is divided and subdivided into very small the constellations.We divide the day into dawning, sun rising, lunch, afternoon, sun setting, dusk or twilight, appearance of the constellation Orion, and the appearance of Ursa Major’s slanting. These moments mark times to make tea, to have a tea, to fill a tobacco tin, to take a nap, and to give a hint.

The maximum unit of capacity is the in (broad gauge).The minimum unit of capacity is the khuvi (narrowestgauge). These measurements are out-dated nowadays. But in ancient times, our Mongolians used various measurement devices, such as vessels, including a mare’s or cow’s milkskin, a pot, pail, kettle, tankard, ladle, cup, bowl, or spoon; fractional measurements were made with sacks, pots, cups, ladles, handfuls and pinch; measurements of length, width and height included the fathom, cubit and finger-span. Even today, we Mongolians commonly use such terms as Mountain-sized, ox-sized, or sheep-sized.

Weight There was a weight designated as püü which was equal to 16.3 kilograms. Tsen, lan, jin, and püü are used sel-

There were the following weightings: dom today. A steel-yard (dens) was a lever with a short arm for weighted things and a long graduated arm on which a single weight moves. Balance consists of a beam and pans or scales. Mongolians used two types of scales for trade and life. Between the tenth and thirteenth centuries, steel-yards were used for weighing silver, coin, precious metal, while hand-balance was used for weighing other things. When the ancient capital city of Karakorum was excavated, there are certain archaeological findings, including the find of the smallest weight of the balance, 445 gram. The biggest weight of the balance they found is 2,600 gram. There is a big difference between weights. This means that measuring was more accurate than today. These weights were cast in the smelting-works which had existed in the vicinity of the ancient Karakorum.

Once the following measurements were used:

There are also measurements by foot. Alkham (step) is 80-160 cm. Altsam (stride) is 160-176 cm. There are also measurements by pasture distances of animals.here are measurements of khuruu or finger-distance, across the width one finger (2 cm), barim-distance across four fingers (10 cm), sööm-distance between the tips of the outstretched index finger and the thumb (14-19 cm), töö-distance from the end of the thumb to the end of the middle finger when fingers are extended. Töö (Mongolian span) is /15-22 cm/.

A ödriin gazar (day’s distance) means a destination that is reached by riding camel or horse during one day. Khonogiin gazar (day and night distance) means a destination which to be passed a night. We also say jilijn gazar (year distance). This is destination to reach by riding within a year. Nüüdliin gazar (distance moving to another place) is a destination to reach by moving. Saakhaltiin gazar (distance to reach the neighbouring village) is 1-2 km. Khol saakhalt is 3-5 km (two ger villagers able to see each other). Kharaa khürekh gazar is the distance a herder can see, about 5 km; mod gazar is 1.06 km, beer gazar is 7.4 km, örtöö gazar is 30 km. 3 metres is called jan and 0.32 metre is called chii. Mongolians also measure the distance by speed, such as a distance of shooting arrow, tatlaga (place out of 11-12 fathoms), khom (7 fathoms) a distance to sprinkle grains or to split a stone. We also gauge the depth of water by horse or camel, which is able to disappear or water is able to spread over the back of a horse, water is reachable the stirrups. We also gauge the depth of snow by horse’s belly; we say the snow is able to clog the knees of horse or fetlock-sized snow; herd’s hoof-sized snow or hare-foot-sized or bird-foot-sized snow. There were many measurements if you look up the old books. For example a size is like top of hair or like barleysized. 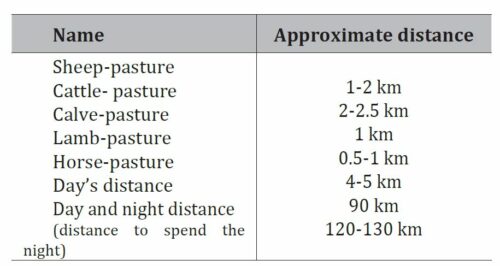 If we put our traditional area measurement into metric system:

The following names for the area measurement were used as well:

We, Mongolians, say a khaash khaashaa area is partial; khaash khaashaa means square. Urt means length, örgön means broad; örtöö is relay, saakhalt is vicinity. Ald is fathom, alkham is step or pace. Töö is span, khuruu is one joint. We also speak about measuring as sheep-lairage-sized, ger-site sized, crown-covering sized, saddle cloth-sized, palm-sized, nail-sized, just like nail or just like lunula, as well as just like the point of needle. We enclose a cloth in fold and cut it along the folding. It is called “am or square”. When the square-cloth is subdivided into triangle, then we say triangled brocade or triangled silk.