While practicing nomadic pastoralism for hundreds of years, Mongolian communities greatly revered and perpetuated the horse in their coat of arms and musical creations. One of the manifestations of this respect is the morin khuur fiddle. The term morin khuur means fiddle with a horse-head. The morin khuur has two strings. The strings and bow are both made of horse-tail hair. The morin khuur is an instrument that features an expansive musical range, excellent sound expression, and perfect harmonization of its melody. A well-known Mongolian poet Tsedendorj Mishig celebrated the charm and power of morin khuur and its player in a poem, writing:

Only its two strings express
All the events of the world. 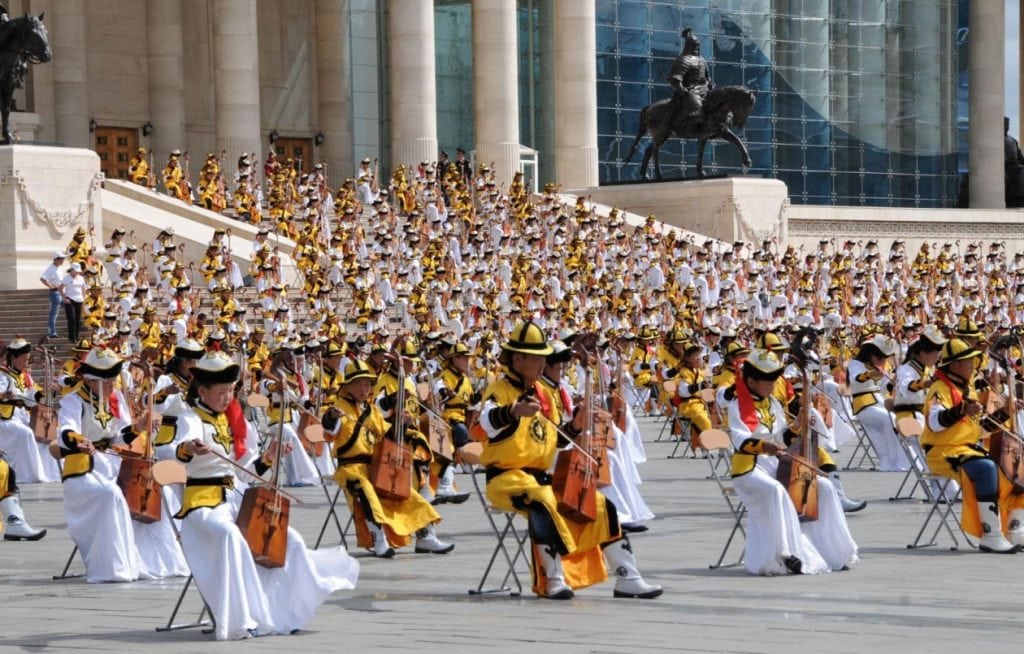 The origins of the morin khuur are traced to ancient times. Tan Dynasty historical records mention that the Huns, who existed in the Mongolian territory around the third century BC, and Donghu people, who existed there around the first century BC was using a fiddle called the Hün-khuur (kun–heu) or fiddle of the Huns. Moreover, an abundance of records mentioning the horse-headed fiddle and musicians is found in the oral and written sources pertaining to the Great Mongol Empire around thirteenth and fourteenth centuries, as well as the diary of the French missionary Guillaume de Roubruck, who visited Mongolia between 1253-1255.An ancient legend about the origin of morin khuur says: ‘Once upon a time, there was a man on a long journey. On the way, his horse died. While watching his horse, a grieving traveler noticed that the mane and tail of his horse were whistling in the strong blowing wind. Inspired by this, the traveler crafted his horse head with wood and coated the sound-box with the thin skin of groin of his horse and furnished it with his horse’s tail hair as strings. He stroked the instrument with a stringed bow and melodiously described his horse’s neighing sound, steps as well as trotting and cantering, and consoled his heart. This is how the morin khuur originated’

The ancestor of the morin khuur is the ‘shanagan khuur’ or ladle fiddle. It is believed that the Mongolians strung their wooden airag ladle (the ladle used to serve fermented mare’s milk) and created the ladle fiddle. From ancient times, fiddles have been named according to the animal head figure crafted on its neck, such as the swan fiddle, crocodile fiddle, dragon fiddle, lion fiddle and so on. In western Mongolia, there is a fiddle called ekil. The ekil is characterized with a chandmani symbol on its head.

A very ancient form of the morin khuur is tsuukh khuur or davsgan khuur (bladder fiddle), which has a sole string and a simple, frugal design. Its sound-box is coated with a bladde membrane of an ox or the placenta membrane of a newly-calved cow. The bladder fiddle was popular by the ancient forest people, but it is now a largely forgotten instrument. The morin khuur is an instrument that integrally embodies the cultural and customary traditions of the Mongols and is played during festive events, social gatherings, ceremonies and various rites related to animal husbandry. This is why each and every Mongolian family prefers to have a morin khuur in their homes and why they place it in the most honored place. Regardless of one’s ability to play the morin khuur, visitors to a family ger must touch the fiddle as a respect.

Spring starts with the Mongolian traditional festival Tsagaan Sar or ‘White Moon’ (Lunar New Year), and during this festival people greet each other in traditional ways. The morin khuur is also played to ‘expel home frost’ as well as a symbol of well-wishing to each family for a new year without pain, trouble, quarrel, and fights.

This tradition has been reflected in the state ceremonial practices. In accordance with the Decree of Mongolian President, during each Tsagaan Sar, the Grand State Khan Fiddle is played with its anthem in the State Ceremonial Palace for the power of Mongolia, tranquility, and happiness of every family, as well as for the fortune and goodness of each individual of Mongolia. This practice is accompanied by the honored performance of the morin khuur, which is broadcasted through radio and television nationwide. By the same token, the morin khuur is played by well-known musicians during many festive events, such as animals coaxing rituals, the start of the milking of mares and the associated rites which occur at the end of spring and the beginning of summer, lambing and milking seasons. An interesting tradition is still being practiced among the people of the Gobi region wherein herders use the charming a melody of the morin khuur to help coax mother-animals to accept baby animals that have been orphaned or rejected by their mothers. Russian poet Sergey Esenin once wrote, ‘It’s not a fable that Mongolians say it’s possible to touch a camel with the melody of a fiddle’. Summer and autumn are the seasons for airag and festivities in Mongolia and it is the most favorable time for encouraging and entertaining with songs and music. During this season, Mongolians widely celebrate the Eriin gurvan naadam (often referred to as Naadam Festival, a festival in which three manly games-archery, horse race, and wrestling-are organized), wedding ceremonies and other festivities.

In these festive events, the morin khuur and urtiin duu manifest the meaning of honor and symbolism, and they are thoroughly practiced according to the ancient customary orders from the beginning to the end of the feasts. The morin khuur represents the characteristics of the Mongolian traditional music mindset in the most expansive way. The diversity of music instruments belonging to different Mongolian ethnic groups retain some of the traditional tunes called tatlaga (short compositions) specifically intended for fiddle. A melody named ‘Jonon khar morinii yavdal’ (Gait of the princely black horse) is widely popular in the Central Khalkha region, and keeps diverse local features. ‘Khuuriin magnai’ (Top fiddle), ‘Uulgan shar atnii yavdal’ (Gait of an extraordinary yellow gelding camel), ‘Öröölt khaltar mori’ (Trammelled dark-brown horse), ‘Argaliin khurga’ (Lamb of a wild sheep), ‘Daagan nemnee’ (Colt rug), and ‘Shirgiin shar at’ (Gait of a yellowish gelding camel) are a few of the examples of tunes with specific stories and legends that are abundantly found in the Gobi region.

A fiddle player of the Dariganga ethnic group plays tunes such as ‘Zeenii ayaz’ (Arrow bulb melody), ‘Mogoi kheer’ (Snake-like bay horse), ‘Shirüün khar mori’ (Fierce black horse), ‘Nütsgen tsavidar’ (Light chestnut with whitish mane and tail), ‘Hartsaga zeerd’ (Hawk-like chestnut) and ‘Khökh nuuriin togoruu’ (Crane of Blue lake).In western Mongolia, there are two different tatlaga tunes:
ekil tunes and biyelgee tunes. The biyelgee is a traditional body dance. Its dance tunes have customary names and are suited to dancing movements, whereas ekil tunes describe certain melodies connected with stories and imitate the movements and gaits of animals, the sounds of mountains and rivers, and the noises of animals. These tunes also imitate the tunes that herders have traditionally used for coaxing ewes, nanny-goats, and mare camels that refuse to allow their baby animals to nurse. There is a rich variety of these kind of tunes, such as ‘Sarig tsagaan inge’ (Pigeon-toed white mare camel), ‘Joroo morinii yavdal’ (Gait of ambler), ‘Balchin kheeriin domog’ (Legend of a bay horse with a trace of bridle), ‘Eeven goliin usan’ (Water of Eeven river), ‘Dörvön Oiradiin uria’ (Call of the Four Oirad), ‘Öröölt sharga mori’ (Trammeled palomino horse), Beijing shar at (Beijing yellow gelding camel), and ‘Üyen ulaan tsar’ (Stoat-red area), to name but a few. Besides playing these tunes, the morin khuur is the main instrument used to accompany long song singing.

A well-known Mongolian ethnomusicologist Badraa Jamts described the horse-head fiddle and long song as “the two golden wings of the Mongolian national music tradition”. Besides accompanying the long songs and folk dances, both the fiddle and ekil accompany folk stories, epic singing, eulogies and praise songs. Metaphorically, each and every branch of the great bushy tree of the Mongolian traditional folk arts share the same roots with the morin khuur. Appreciating the contribution of Mongolians to the cultural heritage fund of humanity with the creation of the morin khuur and the development of its playing technique to the traditional art form, UNESCO declared the instrument to be a ‘Masterpiece of an oral and intangible heritage of Humanity’ in 2003. Today, the number of new musical pieces for the morin khuur and professional musicians, as well as the foreigners interested in learning and studying the morin khuur, is greatly increasing. An independent ensemble of the morin khuur was established in 1992 and has since become widely known among both foreign and domestic audiences for their masterful and accomplished performances. Thus, morin khuur is serving as a name-card for promoting Mongolia worldwide and contributing to intercultural understanding, peace, and harmony.